There was a lot of celebrating and back slaps late in the night at Suncorp Stadium.

It started when Sydney Roosters rookie Kyle Flanagan slotted a high-pressured conversion from nearly 30m out to draw level with Melbourne with two minutes remaining.

Luke Keary then slotted what looked the winning field-goal with one minute remaining.

Then Storm fullback Ryan Papenhuyzen launched one from nearly 35m out to send yet another Roosters-Storm clash into golden-point extra time.

Cameron Smith made no mistake with an 84th-minute penalty to seal the win for the Sunshine Coast's new residents and end the tricolours' five-match winning streak.

Jake Friend was pinged for shoving Dale Finucane at the play-the-ball. 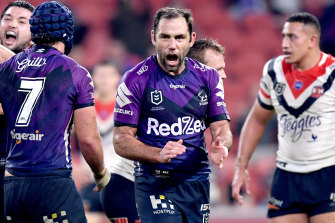 Cameron Smith celebrate the Storm's golden-point win against the Roosters in Brisbane on Thursday night.Credit:Getty

As Brad Fittler summed it up in the Nine commentary: "It was an amazing finish to an amazing game.''

If ever there was an argument for two teams going home with one point each, this was it.

The Roosters did their best to throw this game away as they continually dropped the ball in the second half.

Their completion rate was dreadful and it was only some moments of magic from Brett and Josh Morris that kept the scoreboard ticking over.

While little will separate these two heavyweights again this year, one thing that did become clear was the need to re-sign the Morris twins.

The first thing Chooks boss Nick Politis should do on Friday morning is pick up the phone to the Morris twins and convince them to sign one-year extensions.

Brett set up the Roosters' first try, scored one himself and was defensively brilliant, dominating NSW Origin and Kangaroos flyer Josh Addo-Carr all night and belting his share of opponents into touch.

He also broke into a decent gallop late in the second half that eventually led to Josh's second try.

Josh finished with a double and also had a hand in Brett's four-pointer.

"Surely not,'' was Andrew Johns response when asked if the Morris twins, 34 next month, were finishing at the end of the year.

"When we do the man-of-the-match award, make sure you have the two Morris boys standing side by side.''

There were some brief question marks about the Roosters' potency without Victor Radley and Sam Verrills.

The Storm were also without Cameron Munster because of his own knee injury, and had Smith starting his first game in the halves since 2014.

Both sets of fans would have gone to bed knowing their sides will go close to featuring again in the last weekend of October.

Courageous captain Boyd Cordner and Daniel Tupou exited the contest late because of injuries. They are unlikely to be missing for next Thursday's trip to Townsville.

Melbourne will take plenty of confidence out of the gritty win with few stoppages as they prepare for a trip to Canberra next Saturday night. 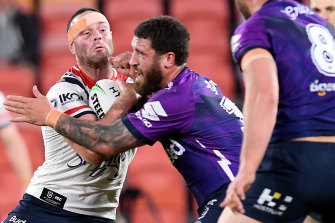 Roosters co-captain Boyd Cordner didn't finish the match because of a head knock.Credit:Getty

Nat Butcher stepped out in Radley's No. 13 jersey and was crunched by Storm centre Justin Olam in the opening minutes. The only shot that was better in the first half was Tino Faasuamaleaui, who went low on a fresh Lindsay Collins.

Flanagan opened the scoring in the 12th minute when Brett Morris pressured Papenhuyzen to get the ball out to Olam, only to throw a loose pass. Morris pounced on the ball, somehow held off Papenhuyzen and Addo-Carr to throw the ball back inside for Flanagan.

But Melbourne hit back straight away when Flanagan had the ball knocked loose and Addo-Carr thundered nearly 60m down the Suncorp turf.

The Storm looked like they were getting on top of their long-running heavyweight rivals but struggled to convert field position and pressure into points.

Papenhuyzen was shoved into touch on one occasion while Brett Morris did a fantastic job to hang back and crunch Addo-Carr into touch.

Ferran Torres: Ronaldo was the best. He is an example for everyone who wants to achieve the maximum in football
Barcelona cannot agree with Ter Stegen on a new contract. The goalkeeper wants to stay
We found out how the fascinating logo of Iceland appeared: Game of thrones has nothing to do with it, the source of audacity is the success of the national team
Ronaldo-Casillas: Proud that we shared great moments
Bayern want to sell Boateng in the summer. The club has no offers yet
Solskjaer on the Europa League: a Trophy would be a big step forward for Manchester United. We want to win something
Juve have contacted Zidane, Pochettino, Inzaghi, Spalletti and Gasperini about working at the club. The Real Madrid coach refused
Source https://www.theage.com.au/sport/nrl/storm-snap-roosters-five-match-winning-streak-in-golden-point-classic-20200702-p558ig.html?ref=rss&utm_medium=rss&utm_source=rss_feed