Australia
Trusted
An article was removed from the original website

A historic laneway in the Sydney CBD, currently being used for dumping rubbish, has become the subject of a NSW Supreme Court battle over access and ownership rights dating back to the early days of the colony.

The case was brought by Anna Arcidiacono and her husband John, who own the laneway and want to use part of it to open a small bar, coffee shop or garden space. 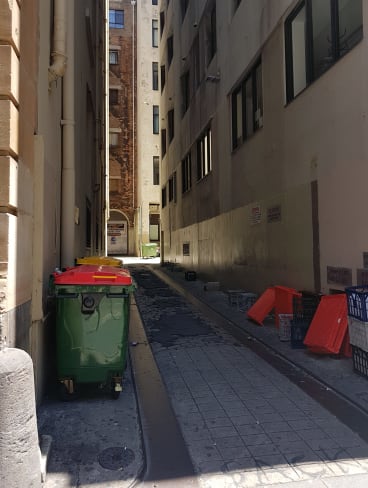 Dispute: The laneway in question.Credit:Sue Williams

The Arcidiaconos are the owners of an office block at 100 Clarence Street that backs onto the 2.4-metre-wide laneway - which then widens to 3.6 metres for its 21-metre length - between the former James Hardie House at 65 York Street and 71 York Street.

Mrs Arcidiacono, who bought the laneway in 2008 after the City of Sydney offered it for sale, said it had become an impossibly expensive holding because she was paying high rates but couldn't develop the site due to other buildings on the laneway have access rights.

"When I purchased it, it became all part of one lot, so it's treated as prime office space, even though it's an unusable laneway; it's all zoned the same," she said. "As a result, the Valuer-General treats every square metre of laneway as prime land for the collection of land tax.

"It's now costing me $50,000 a year in rates. Others have easements over the lane, but have refused to pay any remuneration, or anything towards the bills, which is grossly unfair."

Three of the other buildings that border the laneway have easements – or rights to use the lane for certain purposes, such as fire exits, rights of way and garbage collection – over the land and Mrs Arcidiacono feels that they have blocked her from doing anything.

The row escalated when Mrs Arcidiacono put up a gate at the entrance restricting its use. An injunction was served against her, the gate was taken down and Mrs Arcidiacono took everyone else to court, fighting to restrict their rights to use their lane.

"That laneway is so expensive for me, yet I'm being stopped from developing it," she said. "Sydney Council say they want to activate spaces like that, and put life back into the city, and that's why I thought they sold the laneway to me," she said.

At the moment, the laneway, with its metal cartway lanes and cobblestone finish still mostly intact, is used mostly for garbage bins, bags of rubbish and milk crates full of empty containers, as well as a place for smokers to toss their butts, and for the occasional homeless person to sleep.

"This is a row over a little laneway which is completely useless, that has no economic use at all," said lawyer Carlo Fini, of JS Mueller & Co Lawyers, who acted for 65 York Street . "But we're fighting over it."

Ray White Commercial office leasing director John Skufris said there was a big demand for sites for small laneway bars since the City of Sydney launched its laneways business program in 2008.

"They're happening particularly in the western corridor of the CBD and it's become a bit of a hub for small bars," he said. "The supply of commercial space for them is low at the moment, so they're even more in demand."

Mr Fini said the case highlighted a real issue for the city. "So much real estate in Sydney is unoccupied now, and no one knows who the owners are," he said.

"That's particularly true for a lot of these old laneways whose owners go a long way back into history. It can create real problems, with people unable to exploit them because of easements."

Mrs Arcidiacono took action in the court to have the easements belonging to 65 and 71 York Street – created way back in 1839 – declared invalid, as well as more recent additional easements for 65 York Street – enacted in 2003 when the building was being strata subdivided – cancelled too.

The rights to the land originate from the early days of the colony when the so-called 'Father of Australia', Governor Lachlan Macquarie, gave a Crown grant of the area between York, Clarence, Barrack and King streets - used at one time as a barracks - to Hugh MacDonald, a quartermaster in the 46th Regiment.

Mr Fini, who has researched the background, said in 1839 the MacDonald family sold what was now 65 York Street and 71 York Street, but granted both new owners rights of way over the laneway.

Much later, in 2003, 65 York Street asked for further easements and, with the owners now unable to be traced, the Supreme Court made the orders in their absence.

The Arcidiaconos challenged the easements but the Supreme Court ruled they were valid and ordered them to pay the legal costs of the winning parties.

While Mrs Arcidiacono said the case had so far cost her tens of thousands of dollars, she was now considering appealing.

What are the state’s new coronavirus restrictions and where can Victorians go?

Scott Morrison: We must ‘keep Australia open’ as much as possible

How to keep Jake Stringer lean and keen

On the safe side of the dialect barrier

Out of all the casualties of this coronavirus pandemic ‘truth is the greatest’: Alan Jones

AFL superstar does the unthinkable

The new golf is ... golf after pandemic drives push to play a round

Maggoted? It would be kinder to say tired and emotional

State’s IT trouble a matter of life and death

After stopping China throwing kitchen sinks at us, they’re raising a WTO dispute

Netball season on the brink amid Covid chaos

Kelly gangs up on the Queen, Bradman and Phar Lap

COVID numbers increase: Sydney masks up and leave the street

Fender back after polished display in Brisbane

‘It’s not a spring-clean:’ The crews cleaning Sydney’s infected venues

What is the politics behind New South Wales’ decision to hold back locking down?

Adani strikes coal at Carmichael mine site in central Queensland

‘Wasted so much time’: New global panel to say carbon must be pulled from atmosphere

Coalition can no longer hide internal divisions over climate policy

Kiwis do fly, to the top of the world

Meet Azimuth, the COVID-killing robot artwork that burned its creator

Man charged with murder a month after South Yarra death

Endeavour under pressure to perform as Woolworths completes demerger

China shut down a newspaper, then a city sold out of a million copies

How Barnaby found himself – briefly – up the Darling without a paddle

Deal or no deal? What really happened in last July’s Pfizer meeting

Britney Spears has found her voice, and this time, we’re listening

Crown executive had private detective follow journalist from The Age

Greece no longer the word: Sober outlook for budget future

‘Only one resurfaced’: Search for missing diver in Qld continues

Medicare changes you need to know about