The boss of Australia’s busiest airport says there will be no justification for state border closures once the country’s most vulnerable people have received a COVID-19 vaccination, and wants some international travel to resume when half the population has been immunised.

Sydney Airport chief executive Geoff Culbert said he had received a promising response from the federal and NSW governments on his plan to open up travel in step with each phase of Australia’s vaccine rollout. 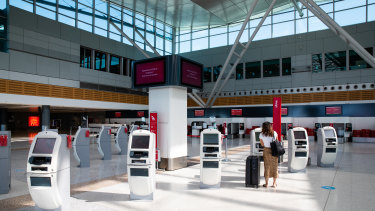 “There’s a huge economic opportunity in this for the nation if we open up at the right speed.”

Sydney Airport has proposed an end to state border closures once the first 7 million Australians in line for the vaccine have received their jab (phases 1a and 1b), which includes those aged over 70, aged care residents and younger adults with underlying medical conditions.

“Once our most vulnerable have been vaccinated, there’s just no justification for keeping state borders closed,” Mr Culbert said.

Australians will be reluctant to book interstate travel while the threat of snap border closures remains, delaying the industry’s recovery, he said. Sydney Airport’s passenger traffic was down 94 per cent in January compared to the same month a year earlier.

Under the airport’s proposal, international students, skilled workers and Australians stranded overseas would be allowed into the country once “phase 2a” of the vaccine program is complete, covering half the population including all adults over 50.

Mr Culbert said he expected all travellers would have to prove they had been vaccinated, with several “vaccine passport” systems already being tested.

But Mr Culbert said the outlook was improving after positive signs of how vaccination programs in other countries were progressing.

“The mood has now changed, as a nation we’ve stopped obsessing over the number of daily cases, and we’re now focused on the progress in relation to the vaccine,” he said. “This is the grand bargain, and if you get your vaccination you get your life back.”

Sydney Airport on Wednesday revealed it fell to a $145 million full-year loss, compared to a $403 million profit a year earlier, after the COVID-19 pandemic slowed passenger numbers to a trickle.

Revenue fell by 51 per cent to $803 million in the 12 months to December 31, with traffic falling 75 per cent to just 11 million passengers.

The company scrapped its dividend and did not provide guidance for when payouts might resume given the uncertainty around when the market will recover.

The $16 billion airport operator said it expected to stay within its debt covenants. It had $3.5 billion in available liquidity at December 31, comprising $1.1 billion cash and $2.4 billion of undrawn debt at December 31.

Sydney Airport boosted its balance sheet last year to see it through a sustained shutdown, with a $2 billion equity raising through a renounceable entitlement offer, a $600 million bond placement and $850 million in additional banking facilities.

Sydney Airport also announced that prominent director David Gonski will replace Trevor Gerber as chairman after its annual general meeting in May. Mr Gerber has been chairman for six years and on the board for 19 years.

Mr Gonski has been on the company’s board for two and a half years, previously served as a director at Singapore Airlines from 2006 to 2012 and recently stepped down as ANZ chairman.

A concise wrap of the day on the markets, breaking business news and expert opinion delivered to your inbox each afternoon. Sign up here.

Meghan ‘rowed with Palace over clothes’

Warner bounces back with a bang

Magnetised and ready for the fridge

Nurse in hospital after COVID vaccine

Yes! Why swearing should be celebrated

S.L Lim the first non-binary writer up for Stella Prize since entry changes

‘Don’t fall in love’: the words that left an indelible mark

We can learn a lot from our own Amanda Gormans

‘If we’re still throwing that up, then fly into us’: Hunt’s plea to Dragons fans

Why the big name NRL players are wary of transfer windows

The boys are back: fans rejoice as men’s AFL returns to Melbourne

What an inquiry into the Christian Porter allegations could look like

‘Does it hurt? It’s a little perplexing’: Crowe breaks silence on Suaalii’s defection to Roosters

Bombers boss: 2021 a development year, not a rebuild

Guineas contender Peltzer looks for six of the best at Randwick

Hawkes stable let their horses do the talking on race day

Reynolds fires back at Cronk after retired star’s ‘failure’ comments

PM, if you believe Porter, say so. If not, ask him to resign

‘Everyone over there hates the Waratahs’: Newsome no stranger to Force-Tahs rivalry

ICAC funding must not depend on the very politicians it investigates

Here’s a clucking a grape auction

NSW and Qld gang up against ScoMo

Net debt on track to blow out to $1.3 trillion after pandemic

‘I am the novice here’: Avatar’s Sam Worthington returns to the stage

‘Our marriage is not what you think’

CHINA ATTACKS ‘RACIST’ AUSTRALIA: Must ‘own up to the problem’

Going but won’t be forgotten: Liz Ann Macgregor’s legacy at the MCA

‘Alleged’ crimes and obscured identities: how does crime reporting work?

‘Super-spreader’ might have infected others in Brisbane CBD hotel

‘Might squirrel grip him’: Why Munster wants Smith to play on at Broncos or Titans

The war hero who removed his own appendix in the jungle

Where’s Solly? Lew’s gone quiet on Myer, but he’s not gone away

Justice is blind in the case of Christian Porter. And so it should be