Police were called at 10.45am on Wednesday and the station in Sydney’s CBD was evacuated. Commuters were told to catch buses. 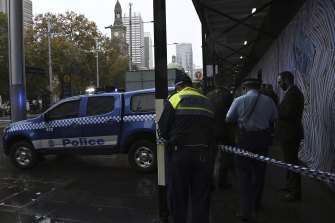 Police said on Twitter at 12.16pm the police operation had concluded “with nothing found”. It said “reports of a suspicious package are incorrect”.

Parents from St Andrew’s Cathedral School were notified via text message that the school was in partial lockdown.

“SACS is in partial lockdown due to a suspicious package found at Town Hall station,” the message reads. “We will advise when given police clearance.” 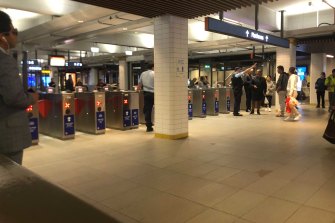 Commuters at Town Hall station were told to catch buses instead. Credit:Julie Power

The school’s director of strategy and marketing, Jackie Isenegger, said police had contacted the school and advised them of a “threat”.

The school decided to keep students inside the buildings and “not have them cross Sydney Square”, she said. The square was never officially closed but is above Town Hall station.

Parents were notified on Wednesday afternoon that the lockdown had ended but to keep an eye on train timetables for the afternoon pick-up.

In advice issued shortly before noon, Transport for NSW said: “Trains cannot run around the City Circle due to a police operation at Town Hall.”

However, in updated advice after 12.30pm, trains were again running around the City Circle.

“However, continue to delay your trip if possible, or consider alternative travel arrangements. Allow plenty of extra travel time, listen to announcements and check information displays for service updates as stopping patterns may change at short notice and buses may supplement some services.”

Our Morning Edition newsletter is a curated guide to the most important and interesting stories, analysis and insights. Get it delivered to your inbox.

New coronavirus case in Victoria: What we know so far

Pretty please: How a bias against ugly plants could spell their doom

Concerns refugees will be denied ‘a fair go’ through snap interviews

$150 off Amazon’s number one bestselling treadmill

Cow dung is no cure for COVID, Indian doctors warn

‘Treated as fools’: Test for Hawks, Roos as Tassie fans vote with their feet

The rare friendship in First Cow

Gas prices could rise after cyber attack on major US pipeline

Boral urges shareholders to reject $8b bid from Stokes-led Seven

Parents need to learn to love their kids taking risks

Your definitive guide to the classic white sneaker

Morrison government needs to ‘refresh its attitude’ towards tourism support

Israeli air strikes kill nine children among others in Gaza

Queensland’s euthanasia laws not a carbon copy of those interstate

What is an iPhone? Apple’s Epic Games stoush will not be its last fight over the App Store

What is Prince Harry trying to tell us with his new series The Me You Can’t See?

Australians should take budget promises ‘with a grain of salt’

‘Another poor decision’: Rioli to face court, may be sacked by Eagles

‘I’m in, baby’: Liz Cambage confirms she will play at Olympics after boycott threat

Fulham relegated from Premier League after loss to Burnley

Your Daily Horoscope for Tuesday, May 11

Severe storms could bring up to 70mm along east coast

Owner reunited with dog allegedly stolen from outside CBD shop

MASSIVE BUDGET CASH SPLASH: The Australians who will be $2160 richer

Amazon is borrowing $23.6 billion of more cash it doesn’t need