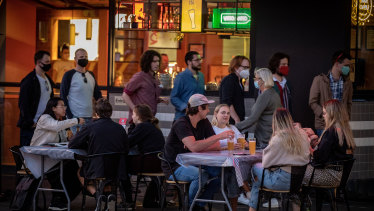 We sat together around a table on a rooftop bar across the street from the colonnaded masterpiece; a little band of work colleagues cheerfully together after being apart through autumn, winter and spring, a warm evening gathering into night.

Oh, there were unfamiliar rules. No standing without a face mask affixed. Elaborate instructions about ordering drinks and dinner not from a waiter, but by mobile phone.

No matter. Melbourne was tentatively opening itself, and we were there to celebrate it, finding the conversations were necessary to backfill the long enforced separation from each others’ company.

I had come four and a half hours along the track to this little gathering, and the trip had unearthed dormant memories.

There is a place on the Geelong highway by Werribee where, if you are driving from the south-west, the towers of Melbourne first reveal themselves, ghostly in the distance.

Those born and raised in a big city, I’d imagine, are denied the complicated squall of emotion that settles into a country heart visiting the smoke.

There is the faint anxiety, a left-over from farm-bred childhood, that you will be exposed as an outsider and judged not to measure up, and the jiggling excitement of unspecified adventure awaiting.

If those senses had dulled in the years I had eventually lived in Melbourne, finally getting to know it, the old alertness stirred as I drove up the road a week ago after an absence of months, the city rearing through the haze.

There came the memory of my father driving us as children to the Royal Melbourne Show, the mere majesty of those words – Royal. Melbourne. Show. – conjuring an excitement near to illness, our parents in their town clothes tense as hostages amid confusing traffic, baffled by the street map.

There were complicated recollections of travelling later to the big city to spend time with a mate whose home was in the then unfashionable and tough suburb of Yarraville.

He led me through night streets to what were known in the '60s as discotheques – smoke-filled clubs with live rock music – negotiating safe passage through terrifying gangs of sharps. I was afraid of the sharps but I was more self-conscious that my country outfit placed me in such a dull category that the toughs were uninterested in even bothering to rough me up.

Later, there were visits to other friends in cool share houses in Carlton, a suburb of university students and European immigrants in those days. I tried to strike a bohemian pose in the cafes of Lygon Street and the courtyard of Jimmy Watson’s wine bar. I learned to drink illicit red wine from coffee cups at the Italian Waiters Club, about the only place still open in the dead late-night Melbourne streets, and carefully copied my friends as they ordered exotic pasta.

And here, a lifetime on, having finally learned the ways of cities, I was back for a night in a Melbourne both familiar and strange.

I had been away since the virus came and drove us all from our office desks in March. Told to work remotely, I took it literally and retreated to my home territory in faraway south-west Victoria.

In the long months since, I had returned to Melbourne just once, during its deepest lockdown, and found a city that might be imagined if a neutron bomb had dropped, its radiant pulse disposing of the living population and leaving the infrastructure intact.

The sounds and energy had been removed by plague-time edict.

Was this how the people of Fitzroy and South Melbourne had felt all those years ago when the suits came and removed their footy teams, transplanting their hearts to Brisbane and Sydney?

Now I was back again and Melbourne, having had its energy filched by a virus, was trying to put itself back together.

But even as my colleagues and I enjoyed a meal and a drink together on that rooftop bar, the lovely old Parliament glowing and a crowd around us, no one could remain unaware that Melbourne’s ticker was ailing.

We strolled through the city later, and the laneways that once gave the place such life were dark.

Within a few days, The Age’s Bianca Hall would report that 28 per cent of businesses in the CBD were vacant or closed, and 13.2 per cent of inner-city jobs had been wiped out.

Having watched for much of my life rural towns struggling with the transfer of generations of vitality to big cities, I no longer felt quite such an outsider in this troubled big city.

Still, I mused, Melbourne will prevail in time, just as it always has.

I knew from my own experiences that it was not so long ago the CBD was altogether empty at night, apart from the Italian Waiters Club … and it had emerged as one of the world’s most vibrant neighbourhoods. Fitzroy and South Melbourne had survived their heart transplants and thrived.

It is not simply that billions of government dollars will save the city.

It is the knowledge, learned on that rooftop bar, that despite all, friends and colleagues are impelled to gather and pick up where they left off.

The city is seductive, beckoning insiders and outsiders alike, forever gathering its own life.

Tony Wright was the winner of the 2020 Walkley award for commentary, analysis, opinion and critique.

The judge was wrong. It can't be that in the moment with De Gea there is no foul, but with the 2nd goal of Manchester United-there is. Maguire about 1:2 with Sheffield
Juventus are Interested in Auar
Ex-CSKA forward Denis Popov has been appointed head coach of SKA Rostov
Solskjaer after 1-2 with Sheffield: Manchester United have no time to feel sorry for themselves. Saturday's match with Arsenal
Brother Chalova moved to the Serbian Subotica
Barcelona will not sign Garcia in the winter due to financial problems
Rodgers on the draw with Everton: It was unlucky that Leicester did not score the second goal
Source https://www.smh.com.au/national/victoria/take-it-from-an-outsider-marvellous-melbourne-will-prevail-20201126-p56i6j.html?ref=rss&utm_medium=rss&utm_source=rss_national

How I blasted away my double chin

Victoria’s remaining border restrictions with NSW set to be lifted