Finally back in Queensland, Biloela’s Murugappan family were all smiles as they were whisked away from Brisbane Airport on Wednesday afternoon.

The beaming family waved to waiting media as they were driven from the airport en route to the central Queensland town they still call home, despite being away since an early morning Australian Border Force raid in 2018. 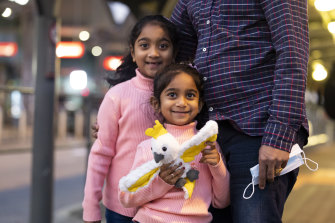 Australian-born Tharnicaa and Kopika Murugappan at Perth Airport on their way home to Biloela.Credit:Matt Jelonek/Getty Images

After that raid, Priya and Nadesalingam Murugappan, who arrived separately by boat as Tamil asylum seekers about a decade ago, and their Australian-born daughters, Kopika and Tharnicaa, were taken to Melbourne before then being detained on Christmas Island in August 2019.

After Tharnicaa suffered a blood infection, they were moved to Perth, where they were in community detention.

That changed almost two weeks ago, when Treasurer Jim Chalmers granted the family bridging visas in his capacity as temporary home affairs minister.

Little Tharnicaa will celebrate her first birthday outside detention on Sunday with a “pink party”.

Speaking at Perth Airport, an emotional Priya thanked the community and her family for the support they received while living in the WA capital for the past year.

“Me and my family are very happy to start our journey back to my community in Bilo,” she said. “Thank you to all in Perth, thanks WA.”

Kopika said she felt “happy” to be going on a plane. The shy six-year-old told reporters her favourite game was hide-and-seek and that she was excited for her sister’s pink-themed birthday party as it was also her favourite colour.

The Biloela community has hung welcome-home signs and baked cakes in preparation for the family’s expected arrival on Friday. 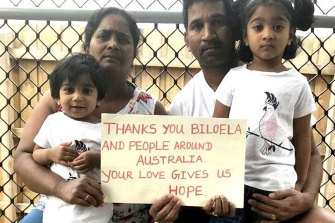 The Murugappans, pictured in detention.

“Home to Bilo” campaign co-ordinator Angela Fredericks accompanied the family on their flight to Brisbane.

Speaking in Darwin upon his return from Indonesia, Prime Minister Anthony Albanese said every Australian should feel good about the family’s return home.

“The Bilo family were loved and wanted by their local community,” he said.

“This guy, Nades, worked at the local meatworks. We import people to work in meatworks because we can’t find enough workers, and here we grabbed this family in the middle of the night, took them down to Melbourne, then took them to Christmas Island, then they’ve ended up in Perth.

Premier Annastacia Palaszczuk said she welcomed the Murugappans’ return to Queensland and hoped they would cheer on the state in Wednesday night’s State of Origin.

“I just reflect and think about what that family has gone through over the last few years.”