Energy Minister Angus Taylor will fast-track changes to a $2 billion climate fund as he rejects furious criticism of a new plan to spend its cash on carbon capture and storage projects.

Mr Taylor called on the government’s critics to give up their "ideology" in opposing the controversial projects and said he would consider putting changes to the Parliament to overcome their objections. 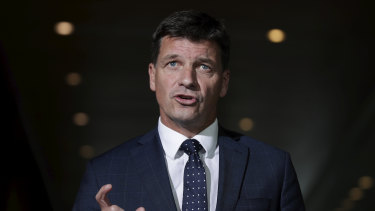 He said the government was already working on changes to the Climate Solutions Fund to broaden its investments and act on a review that backed the case for carbon capture, a divisive idea dismissed by environmentalists.

"If we want to find the best opportunities for emissions reduction we should be doing it across as broad a set of activities as we can," he told The Sydney Morning Herald and The Age.

"When it comes to technologies, we should be getting a lot of horses into the race."

Labor branded the fund an "abject failure" and said it would consider the new review, while the Greens attacked carbon capture as "greenwashing" because it would help subsidise projects that burned coal or gas.

The Australian Industry Group welcomed the recommendations to remove barriers to investment but said the country needed a long-term vision on emissions as well as adequate resources to deliver results.

The Australian Renewable Energy Agency offers grants and the Clean Energy Finance Corporation offers loans to "green" projects but they are not allowed to support carbon capture and storage. The government on Tuesday accepted in principle the idea of removing that ban.

Gas giant Chevron is attempting to use carbon capture and storage to reduce emissions at its Gorgon project in Western Australia by pumping carbon dioxide into a reservoir two kilometres underground, while Santos is doing the same at its Moomba field in South Australia.

Australian Conservation Foundation climate campaigner Suzanne Harter said the new plan meant ARENA and the CEFC would have their missions "corrupted" by new instructions to support carbon capture and storage.

Australia Institute climate program director Richie Merzian said $1.3 billion had been "wasted" on carbon capture and storage and it was "preposterous" to use taxpayer funds to support them.

Mr Taylor said his department was already working on changes to regulations to authorise the Climate Solutions Fund to invest in a wider range of projects, but was yet to decide if this would require legislation as well.

"It just means we’ve got to work out how best to get technology neutrality to happen across ARENA and the CEFC."

The report, led by former Origin Energy chief executive Grant King, recommended 26 changes to the Climate Solutions Fund, the successor to the "direct action" policy that has already spent $2.5 billion on projects to cut emissions.

The Morrison government committed another $2 billion in the budget last April for more projects over the next 15 years.

Mr Taylor said he wanted the funds to go to projects in transport and manufacturing, such as rewarding a steelmaker or similar company for overhauling its factory to cut emissions.

While Labor and the Greens could in theory move in the Senate to disallow any regulations that change the fund, Mr Taylor said his message to critics was to “focus on the outcomes” rather than ideology.

“We’re interested in the outcomes. If a technology can reduce emissions, and we know it can do so at low cost without destroying jobs and industries, it should be given serious consideration,” he said.

Grattan Institute energy program director Tony Wood said government grants could only do so much to cut emissions when there was no lasting incentive to encourage demand for low-emission energy.

"The Climate Solutions Fund remains a clunky mechanism dependent on a budgetary allocation," he said.

"There is no new funding. ARENA is running out of its existing funds and the CEFC is a provider of debt."

This is the best Milan in years: superkambekom with Juve (3 goals in 5 minutes!) saved the intrigue in Serie A
Zlatan Ibrahimovic: I am the President, player and coach! If I had been in Milan since the start of the season, we would have taken the scudetto
Sarri on the defeat by Milan: we played first-class football for 60 minutes. Then-turbidity
Pioli on the victory over Juve: Milan became a team. We can play even better
Pioli beat Juventus for the first time as a coach
Vardy has scored 10 goals for Arsenal in Premier League matches. Only Rooney has more
Ronaldo scores or gives an assist in 17 consecutive Serie A matches, where he scored 25 (21+4) points
Source https://www.smh.com.au/politics/federal/taylor-stares-down-objections-to-carbon-capture-schemes-in-2-billion-fund-20200519-p54ui9.html?ref=rss&utm_medium=rss&utm_source=rss_feed

'Blue sky' mirage: Wall Street is getting more dependent on Apple and co

Quibi, the car crash we cannot look away from

From Solid Rock to BLM: a role for an old 'whitefella'

Where you can swim above the treetops

Derelict fire-damaged home has no roof