Jason Demetriou has worked closely with Tevita Pangai jnr and knows he needs strong people around him, but stopped short of declaring the red and green welcome mat would be rolled out for the unwanted Bronco.

Pangai jnr was on Souths' radar last year and even met with officials before he recommitted to Brisbane, where he was originally brought through the system by Demetriou and Wayne Bennett. 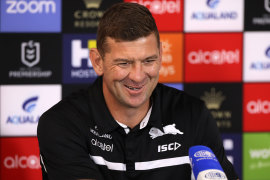 Jason Demetriou has enjoyed mixing things up this week as the ''relief teacher''.Credit:Getty Images

Demetriou, who will take charge of his second Souths game on Saturday evening against North Queensland while Bennett finishes his 14-day isolation, said the Redfern club were not financially in a position to make a play for Pangai jnr even if he did become available.

Although Demetriou takes charge of Souths from 2022, any recruitment decisions still ultimately rest with Bennett.

"I haven't given Tevita much thought, and I'd have to talk to Wayne about it, I've mainly been thinking about our preparation'' Demetriou told the Herald.

"For us at the moment, we're struggling to keep Alex Johnston because of cap issues. It would be difficult with Tevita. He's got a lot of talent, he just needs strong people around him to help him as a person more [than] a player.'' 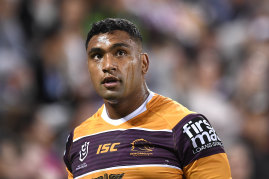 Pangai jnr is set to be sacked by the Broncos, with last weekend's COVID-19 breach the tipping point. The Warriors loom as his best hope, although Bennett has a record of getting the best out of troubled players.

Demetriou has certainly made the most of the past week as he calls the shots. He likened his role to that of a ''relief teacher''.

He kept it light at the start of the week with the players spotted giggling and playing games on Monday.

"The past few weeks, our games have been high intensity, and we've had guys involved in their first run of games in first grade,'' Demetriou said.

"Because the Cowboys had the short turnaround and had the travel, it was a good chance for us to freshen the boys up.

"We played those games, and we had lunch together in the change rooms as well. It was about sitting down together and eating together and enjoying each other's company.

"We rested up again Tuesday, and Wednesday's session was one of the better sessions we've had the last four or five weeks, which was good. I was really keen on making Wednesday good so it was important they were fresh and we weren't burning the candles at both ends.

"These were my ideas but Wayne was supportive of it. We'll find out on Saturday if it's all worked.''

Demetriou said he and Bennett had spoken every day, and he was ''not rewriting the script''.

"The script is already there, I've been with Wayne nearly four years so I know how he thinks and what he likes to do,'' Demetriou said.

"It's about me making sure I deliver on that. I also want to be authentic with who I am and how I'm delivering it.''

Demetriou confirmed it was Bennett's decision to shift Cameron Murray to the edge against the Cowboys, elevate Liam Knight to lock forward and drop Bayley Sironen to the bench.

Demetriou, 44, said in light of recent events there were no plans to fast-track the club's succession plan, and Bennett would remain in charge until his contract expired at the end of next season.

"Wayne's still the boss, I've been a head coach for five years at other levels, it's not new for me to do it, but it's also about being respectful to Wayne and the club and his role here,'' Demetriou said.

"I'm under no illusions I'm the assistant and that's how it will stay.''

Arteta on Manchester City in the League Cup: Arsenal are not very lucky with the draw. This is another test
Klopp about losing to Arsenal and Liverpool in the country of dreams, you have to score. Last pass failed
Muller held the UEFA ceremony in the stable. There had Neuer, Kimmich and Evangeliski
Liverpool 4 seasons in a row, cannot get past the 5th round of the League Cup and 2012 wins the tournament
Leno - first Arsenal goalkeeper in 8 years not to miss at Anfield
Drogba's friend came to Lazio from Serie B. Fans jokingly call him the new Kante and blame bosses for weak transfers
Barca defender Langle removed in the first half of the match with Celta for two yellow cards
Source https://www.theage.com.au/sport/nrl/tevita-needs-strong-people-demetriou-on-getting-the-best-out-of-controversial-bronco-20200814-p55lq9.html?ref=rss&utm_medium=rss&utm_source=rss_feed