Text messages between senior Education Department officials, released by Queensland's crime watchdog in a damning report, reveal their concern that former deputy premier Jackie Trad "didn't like" the principal-elect of a new high school in her electorate.

The report reveals attendees at a meeting between Ms Trad and the woman, who ultimately did not get the job, told investigators Ms Trad appeared "cold" and "unhappy" during the encounter.

The Crime and Corruption Commission's 178-page report cleared Ms Trad of any corrupt conduct in the selection of the new Inner City South State Secondary College principal, but uncovered serious flaws in the recruitment process at a department level.

The report details text messages between an Education Department deputy director-general and the selection panel chair, after they arranged for Ms Trad to meet the principal-elect, Tracey Cook. Ms Cook didn't know she was the successful candidate at the time of the meeting.

That meeting was the catalyst for the CCC investigation, at which point Ms Trad stood down from her role as deputy premier.

The meeting was proposed as a "test" to see how Ms Cook would stand up to Ms Trad's powerful personality, the CCC report said, and afterwards Ms Cook was not offered the role and it was re-advertised. 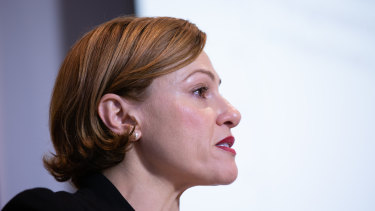 The Crime and Corruption Commission report revealed a meeting was proposed to "test" how the principal-elect would stand up to Jackie Trad's powerful personality.Credit:Attila Csaszar

The deputy director-general texted the panel chair after the meeting saying "that wasn't too good was it".

The panel chair responded: "No it wasn't. I thought she didn't like [Ms Cook]".

The deputy director-general texted back that they "needed to talk" and he had not yet heard from Ms Trad "but it will come".

A few days later the deputy director-general texted Ms Trad saying they would readvertise the role at a higher paygrade and asking "you happy with that approach?"

He told the CCC that the question was put to Ms Trad on the premise that readvertising the role would extend the recruitment process by up to three months.

CCC chairman Alan MacSporran said the case was an example of the pressure senior public servants could feel they were under to do what a politician wanted.

He said senior public servants should be given tenure rather than operating on three-to-five year contracts, to ensure they felt free to give frank and fearless advice to politicians rather than viewing them as "political masters" who could move them on.

"I'm not suggesting this is sector-wide as a problem, that people cave to the pressure," Mr MacSporran said.

"We've seen it particularly in this department. I think it's a fairly disgraceful example, frankly, of someone who perceived that they needed to be over-responsive and do ... what they thought the politician wanted, without expressing any view about it. 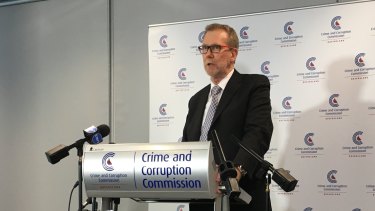 Crime and Corruption Commission Alan MacSporran said the episode was a "disgraceful" example of a public servant trying to comply with a politician without speaking frankly.Credit:File

"This is a very clear example of it. That theme is likely to be present in one form or another across the sector."

The CCC also found the Education Department released false school enrolment figures to the media in a bid to justify the second recruitment process, and deleted an email requesting the information be amended online.

A department spokesman on Thursday afternoon said the department was "carefully considering" the CCC's report.

"The department acknowledges that the report raises concerning issues with respect to the recruitment process for the foundation principal of ICSSSC," the spokesman said.

"The department has already implemented changes to its recruitment processes to ensure that matters raised in the report are not repeated and will fully co-operate with any considerations of the [Public Service Commission]."

Kirsten Ferdinands was chosen to lead the new school in the second recruitment process.

Ms Trad on Thursday said the report was a vindication that she had never attempted to interfere in the recruitment process, and she fully believed she had been meeting with Ms Cook as the successful candidate.

When asked if she felt used by department officials, Ms Trad said: “I guess it’s hard not to feel that way”.

Mr MacSporran said the fact many senior public servants were on contracts meant they often were replaced by newly elected governments, wasting their corporate knowledge and experience, and creating a risk of job insecurity.

"There needs to be more attention given to training, guidelines, protocols around the relationships between politicians and bureaucrats," Mr MacSporran said on Thursday.

"Bureaucrats are employed - and they're a great asset to politicians - to give fearless and frank advice about things. Whether their advice is accepted is an entirely different matter.

"But their advice should be given objectively, independently, and on its merits. They shouldn't be thinking about 'what does the politician want me to say, what should I say to keep my job'."

Coach Of Brentford: We went from a mid-level team to the third team of the season. This is an incredible achievement
Burnley are not going to sell Tarkowski for less than 50 million pounds
Lester wants to rent Trincou at Barca with the obligation of ransom for 50 million pounds
Scott Parker: Fulham have a lot to progress. And I am happy about it
Manchester United are threatening to pull out of negotiations for Sancho if Borussia do not reduce the price from 120 million euros
Cesc about Casillas: You are a mirror to look into
Lone mascots are another symbol of the year
Source https://www.smh.com.au/national/queensland/text-messages-show-public-servants-feared-trad-didn-t-like-principal-20200702-p558ih.html?ref=rss&utm_medium=rss&utm_source=rss_national