When Russian troops first streamed across the Belarusian border into Ukraine for what they had assumed would be a lightning assault on Kyiv, they were intending to rely on the region’s extensive rail network for supplies and reinforcements.

The Russians hadn’t taken into account the railway saboteurs of Belarus.

Starting in the earliest days of the invasion in February, a clandestine network of railway workers, hackers and dissident security forces went into action to disable or disrupt the railway links connecting Russia to Ukraine through Belarus, wreaking havoc on Russian supply lines. 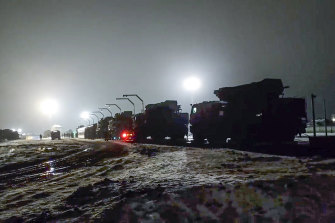 Russian military vehicles prepares to drive off a railway platforms after arrival in Belarus in January..Credit:AP

The attacks have drawn little attention outside Belarus amid the drama of the Russian onslaught and the bloody aftermath of Russia’s humiliating retreat. Fierce Ukrainian resistance and tactical errors by an ill-prepared Russian force were likely enough to thwart Russia’s plans, analysts say.

But the Belarus railway saboteurs can at least claim a role in fuelling the logistical chaos that quickly engulfed the Russians, leaving troops stranded on the front lines without food, fuel and ammunition within days of the invasion.

Alexander Kamyshin, head of Ukrainian railways, expressed Ukraine’s gratitude to the Belarusian saboteurs. “They are brave and honest people who have helped us,” he said. 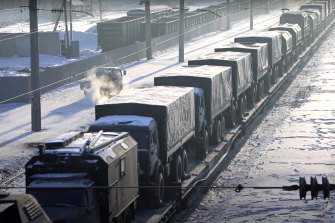 Russian military vehicles on a railway platform on their way to attend a joint military drills in Belarus, in Russia in January. Credit:AP

The attacks were simple but effective, targeting the signal control cabinets essential to the functioning of the railways, members of the activist network said. For days on end, the movement of trains was paralysed, forcing the Russians to attempt to resupply their troops by road and contributing to the snarl-up that stalled the infamous 40 mile (64 km) military convoy north of Kyiv.

How much of the chaos can be attributed to the sabotage and how much to poor logistical planning by the Russians is hard to tell, especially as there is no independent media reporting from Belarus, said Emily Ferris, a research fellow at the London-based Royal United Services Institute.

But without automated signalling, trains were forced to slow to a crawl and the number of them travelling on the tracks at any one time would have been severely restricted, she said.

“Given the Russian reliance on trains, I’m sure it contributed to some of the problems they had in the north. It would have slowed down their ability to move,” she said. “They couldn’t push further into Ukrainian territory and snarled their supply lines because they had to rely on trucks.”

The attacks also bought time for Ukrainian troops to formulate an effective response to the Russian invasion, said Yury Ravavoi, a Belarusian activist and trade unionist who escaped to Poland under threat of arrest during the anti-government protests that rocked Belarus in 2020.

“I can’t say we were the most important factor, but we were an important brick in the wall,” he said.

The saboteurs drew inspiration from an earlier episode in Belarusian history, during World War II, when Belarusians opposed to the Nazi occupation blew up railway lines and train stations to disrupt German supply lines. The Rail War, as it is known, is venerated as a moment of triumph for Belarus, taught in schools as the most successful of the tactics deployed by resistance fighters that eased the way for Soviet troops to drive the Germans out. 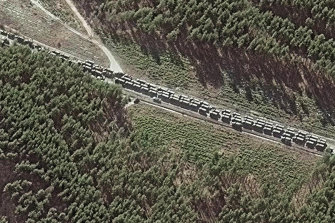 Eight decades later, it is Russia’s presence in Belarus that has stirred dissent. The deployment of tens of thousands of Russian troops in Belarus in preparation for the invasion of Ukraine triggered widespread domestic opposition and rekindled opposition networks formed during the 2020 protests against Belarusian President Alexander Lukashenko, said Hanna Liubakova, a Belarusian journalist living in exile in Lithuania.

This second Rail War has taken a more benign form than its predecessor. The partisans were keen not to inflict casualties, Ravavoi said. So they focused their attacks on damaging equipment to stop the railways from functioning.

“We didn’t want to kill any Russian army or Belarusian train drivers. We used a peaceful way to stop them,” he said.

He and other Belarusians involved in organising the attacks decline to reveal precise details of how the attacks were carried out and by whom, citing the need for secrecy and concerns for the safety of the railway partisans, as the saboteurs are loosely known.

Railway employees sympathetic to the partisans have leaked details of Russian movements and the locations of key railway infrastructure to a group called the Community of Railway Workers, which shares them on Telegram channels. Supporters on the ground link up to carry out the attacks, but there is no formal chain of command, Azarov said.

“Our movement is not centralised,” he said. “It’s not like there’s a leader of the resistance. It’s horizontal, with dozens of groups working on the ground.”

The third group, the Cyber Partisans, is formed of exiled Belarusian IT professionals who have carried out several cyberattacks on the Belarusian government since joining in 2020.

The Cyber Partisans launched the first attack, hacking into the railway’s computer network in the days leading up to the invasion and snarling rail traffic before Russian troops had even crossed the border. Infiltrating the railway network’s computers was relatively easy, said Yuliana Shemetovets, a spokesperson for the group, which is based in New York because the railway company is still using Windows XP, an outdated version of the software that contains many vulnerabilities.

Starting on February 26, two days after the invasion began, a succession of five sabotage attacks against signalling cabinets brought train traffic to an almost complete halt, said Sergey Voitekhovich, a former railway employee now based in Poland who is a leader in the Community of Railway Workers.

By February 28, satellite photographs began to appear of the 64 km convoy of Russian trucks and tanks ostensibly headed from Belarus toward Kyiv. Within a week, the convoy had completely stalled as vehicles ran out of fuel or broke down.

The Belarusian authorities have since launched an intense effort to prevent attacks and hunt down the saboteurs. The Interior Ministry has decreed that damaging railway infrastructure is an act of terrorism, a crime that carries a 20-year prison term.

Dozens of railway workers have been randomly detained and their phones searched for evidence that they were in touch with the partisans, the activists say. At least 11 Belarusians are in custody, accused of participating in the attacks, according to human rights groups.

In early April, security police captured three alleged saboteurs near the town of Bobruisk and shot them in the knees. State television broadcast footage of the bleeding men, their knees bandaged, and claimed they had been shot while resisting arrest.

The shootings have had a chilling effect on the saboteur network, Azarov said. Belarusian troops are patrolling and drones have been deployed to monitor the railway lines. “It has become too dangerous to do attacks,” he said.

But by the time of the police shooting, Russia’s withdrawal from the area around Kyiv was in full swing and the Kremlin had announced it would refocus its military effort on capturing the east of Ukraine. The majority of the Russian troops that entered Ukraine from Belarus are now in the process of being redeployed to the east, the Pentagon says.

Now, a new phase in the rail war may be underway. In recent days the railway activists have posted on Telegram photographs of damage to signalling cabinets along Russian railway lines being used to transport troops into eastern Ukraine.

The attacks can’t be independently confirmed, but Voitekhovich claimed members of his railway network are involved.