Diego Maradona graced some of the most famous stadiums on the planet – from La Bombonera in Buenos Aires to the Nou Camp in Barcelona and, of course, the San Paolo in Napoli, which will soon be renamed in his honour.

But during his memorable two-week stay in Sydney back in October 1993, he also took the time out to visit a slightly more modest venue: Leichhardt Oval. 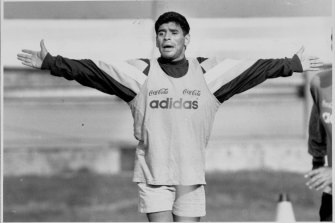 Diego Maradona caught an NSL match at Leichhardt Oval during his brief stay in Sydney.Credit:Simon Alekna

And while the Argentinian superstar never set foot on the hallowed turf of what Wests Tigers fans regard as the eighth wonder of the world, he still managed to steal the limelight.

A week out from Argentina's World Cup qualifying clash with the Socceroos at the SFS, Maradona and his teammates made the pilgrimage from their hotel in Coogee to the jewel of the inner west to catch a National Soccer League match.

It was Sunday, October 24, and Sydney Olympic - who called Leichhardt Oval home back then - were at home to the Morwell Falcons in the opening round of the 1993-94 season.

Aware that they were in the city, Olympic had sent a rather hopeful invitation to the Argentinian camp to come along - if their training commitments permitted - to catch a glimpse of Australia's domestic product. 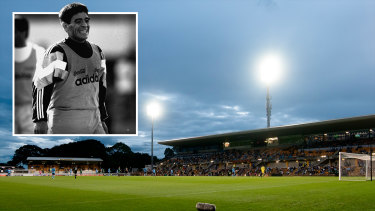 Greg Howes, the club's accountant, told his amateur soccer teammate Glenn Price to be there just in case they actually showed up.

"Greg said, bring your nephew along, come and sit in the box - we think they're going to turn up," Price said. "We weren't sure – but the whole bloody lot came in their tracksuits. It was incredible." 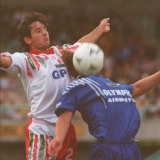 Olympic's Glen Johnson (obscured) tries to control the ball in front of a Morwell Falcons opponent in 1995.Credit:Tim Clayton

As murmurs began to spread across the ground that a legend was in the building, the crowd began to turn their backs on the game and gawk at Maradona.

Price suddenly found himself in the same room as football's all-time greatest player – and a few others like Gabriel Batistuta, Fernando Redondo and Oscar Ruggeri, who were also pretty handy in their own right.

"There weren't that many people at the ground – maybe 1000 or something – but everyone came up as close as they could to that box," he said.

"Everyone's back was to the football. It was like everything else was inconsequential. I went up and shook hands with a couple of the guys – I didn't get to Maradona. They were just polite, respectful.

"They were speaking Spanish of course but just nodded and acknowledged us. It was a non-descript game, I don't know what they thought of it. But they all marched in and behaved themselves.

"It was very special, just to be there – a little moment in Australian football that shouldn't be forgotten. I just wish we'd had mobile phones back then so we could take pictures!"

Legend has it that the late Jim Kelaiditis, the former Sydney Olympic president, did manage to get a word in with Maradona.

"I'm so excited – Maradona spoke to me!" he told friends, according to an anecdote that has done the rounds for many years in Sydney Olympic circles.

"What did he say?" one of his mates asked.

"Black with one sugar," Kelaiditis replied.

For the record, Olympic beat Morwell 2-1, courtesy of goals from Ivan Kelic and Branko Milosevic and a red card to John Markovski, who opened the scoring for the Falcons.

The Herald spoke to a handful of players from that game but they had only vague knowledge of the fact that Maradona watched them play, much to their own frustrations, and none of them managed to catch up with him afterwards.

But the story checks out – the Herald's Mike Cockerill gave Maradona a passing mention at the bottom of his match report, and the two of them are probably now playing a pick-up game together on the big football pitch in the sky.

Player Eibar Enric and defender Girona Luna were sentenced to 2 years in prison on probation for publishing a video of a threesome
Bayern will play Egypt's Al-Ahly or Qatar's Al-Duhail in the Club World Cup semi-finals
Villalibre about delaying time by Athletic: Barcelona is worth a billion euros, and we wanted to win the Super Cup at the cost of our lives
Andrea Pirlo: Juventus want to win a tenth league title. Now is a difficult moment, but the ambitions remain the same
Dynamo crossed the medical examination and Cyberpunk 2077: they decorated the hospital with graphics and stuffed everything with Easter eggs
Joan Laporta: If Messi wants to gain experience in football in America, it will be useful for everyone
Ter Stegen and the Barcelona defenders have filed complaints against Griezmann for commenting on a poor defensive performance after the Super Cup (Cadena SER)
Source https://www.theage.com.au/sport/soccer/the-day-maradona-stole-the-show-at-leichhardt-oval-as-a-punter-20201127-p56io8.html?ref=rss&utm_medium=rss&utm_source=rss_feed

Biden chokes back tears during speech

Trump denounced by his own party leader

'Turn it in to your tool': How First Ladies use clothes to fashion a message

In Trump's final hours, coronavirus death toll tops 400,000 in US

Where to find cheap homes with growth potential

Coronavirus updates LIVE: Tennis star apologises for quarantine outburst as CMO says international travel likely to be one of the last things to return

One in five NSW private schools freeze fees for 2021

Bank dividends to bounce back after 'very grim' year

Thai woman sentenced to 43 years in jail for insulting monarchy

Florida Deputy Stops for Pickup Baseball Game – and Crushes It

Farm scheme fail as $30m left to rot on the vine

‘That was mean’: Charity founder hits back

Empty Streets and Troop Arrivals Seen in DC Ahead of Inauguration

Too many questions surrounding vaccine efficacy

'You can’t trust a lot of countries': The dilemma facing Tokyo Olympics

What the heck is going on in WandaVision? These comic book storylines might explain

It's a Sin: the human story of the 1980s HIV health crisis

Your Daily Horoscope for Wednesday, January 20

Biden's inauguration is an FDR moment. For Republicans, it's civil war

Australian billionaires must repay JobKeeper, not pocket millions in bonuses

From the Archives, 1981: The Iran hostage crisis

Deeper causes of America's troubles are economic and social

Is Novavax the dark horse of Australia's COVID-19 vaccines?

Washington K-9 in Recovery After Getting Shot During Police Chase

2021 and the road to economic recovery... where to from here?

The sharemarket is out of touch ... as it should be

We have become used to these absurd demands

We need to learn to live with indefinite international border closures

What sorcery is this? The answer can be found...on the internet?!

'Who would you have left out?': Langer defends selections after Starc fade out

'He just keeps on batting': Defiant Pujara delivers innings for the ages

Thank you and good night, India

'Soldiering on': Paine plans to continue as Test captain despite series loss