Veteran Coalition MP Warren Entsch has blamed a lack of leadership and direction in Australia's most troubled Aboriginal community over revelations $120 million has been sitting unspent in a trust while the people of Aurukun live in abject poverty. 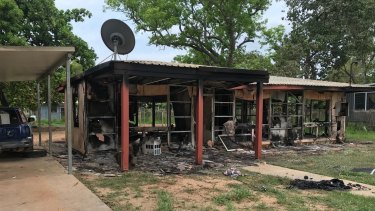 An image from a New Year's Day riot at Aurukun, where six houses were destroyed by fire.Credit:Queensland Police Service

The Herald and The Age revealed yesterday influential locals are questioning why the cash and assets have not been used to advance the lives of the 1000 or so Aurukun residents, whose community on western Cape York falls within Mr Entsch's electorate.

The Western Cape Communities Trust collects royalties paid by energy giant Rio Tinto for the right to mine bauxite on the traditional owners' land.

The money is earmarked to help pay for health, education and other essential infrastructure in Aurukun, which has been the location of rioting in recent months. A lawyer who worked on the trust labelled the residents "the richest poor people on Earth".

"There has been more money spent per head in Aurukun than in very few other places in Queensland," Mr Entsch said.

"The reason they haven't spent it, in my view, is that a lot of the communities lack direction," he said, pointing to Mapoon in Queensland as an area with long-term mayors, good leadership and more success.

"The issues are quite complex," he said, referring to the fighting families, alcohol addiction and historically poor leadership as among the concerns.

"There is a lack of leadership within the community ... I am hoping with a new mayor that might spark some significant changes."

There has been no suggestion of mismanagement, misuse or any form of illegality in relation to the trust funds.

The newly elected mayor, Keri Tamwoy, said the trust could do more to advance the community but it would come down to the decision of the 11 traditional owners' groups that run it.

The trust's chair, Marie Pitt, could not be reached for comment on Monday.

The other parties to the royalties deal, struck in 2001, include four shire councils, the Queensland government, Cape York Land Council and Rio Tinto.

Mr Entsch said alcohol was the "core of the problem", but a prohibition on alcohol wouldn't work. Instead, communities needed to be empowered to work with the police to identify who needed to be taken to a detox centre, he said, before being provided additional support through groups such as Kapani Warrior.

The Kapani program was developed to address the high levels of domestic violence within Indigenous communities and aims to equip young men with techniques to handle anger and de-escalate their emotions.

"The family should be empowering police to work on their behalf ... rather than seeing them as the villains all the time," Mr Entsch said.

Minister for Indigenous Australians Ken Wyatt said the operation of the trust was a matter for its elected board of directors.

However, he added: “The Australian government encourages the board of directors and shareholders of the Western Cape Communities Trust to maximise the benefits of the Indigenous Land Use Agreement for the community."

Carrie Fellner is an investigative reporter for The Sydney Morning Herald.

Berbatov – Bale: Gareth, I want to see you play football!
Arturo Vidal: Bayern are always the favourites, but Barcelona is the best team in the world
Kike Setien: Lewandowski is a great player, but he is not on the level of Messi
The great Milan of the noughties are already coaches: Gattuso is rebuilding Napoli, Shevchenko is going to the Euro, some are still at the club
The Premier League will not have a winter break in the 2020/21 season. Start-September 12, end-may 23
Liverpool have entered talks with Bayern over Tiago
Vertonghen goes to Benfica. The contract is for 3 years
Source https://www.smh.com.au/national/the-issues-are-complex-mp-warns-of-no-easy-fix-for-the-richest-poor-people-on-earth-20200713-p55boc.html?ref=rss&utm_medium=rss&utm_source=rss_feed