By Clair Weaver and Kate Creedon

A tradesman who fell ten metres down an unmarked mine shaft while trail biking with his son in a state forest is preparing to sue the Forestry Corporation of NSW.

Brad Osborne, a 53-year-old concreter, was knocked unconscious, broke ribs and both ankles, dislocated his arm, fractured a shoulder, tore ligaments and cut open his arms in the accident, which left him trapped in a freezing dark hole underground. 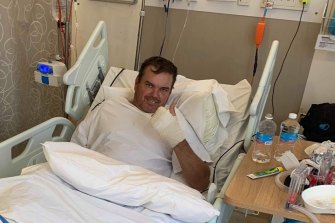 "The pain was unbelievable," he said. "It was really hard for me to breathe. I lay there for hours just trying to take a breath in and out. I was shaking uncontrollably."

Mr Osborne's son Brody Osborne, 23, called triple zero and talked his father through the three-hour ordeal at Sunny Corner State Forest, located between Bathurst and Lithgow, until a police rescue team and paramedics pulled him out on ropes and he was taken to Westmead Hospital.

The Osbornes have written to the Forestry Corporation pleading for mine shafts in state forests to be covered or warning signs to be installed.

Mr Osborne, from Bateau Bay on the Central Coast, is planning to launch legal action over the accident on May 11, which has left him unable to use his shoulder, suffering flashbacks and in ongoing pain. 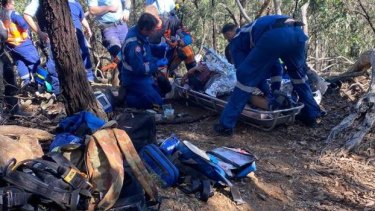 The rescue of Brad Osborne in May.Credit:NSW Police

"Even in hospital, they were giving me all these drugs and I was screaming all night," he said. "I'm in pain all the time, it's like torture."

Mr Osborne said his specialist has told him it's unlikely he will be able to return to work as a concreter nor ride trail bikes with his children again.

Elle Dalzell, of Shine Lawyers, will argue there should have been obvious warning signs, barriers and fencing to warn park-goers of the dangers.

"Our client went through terrible mental and physical pain while his traumatised son watched on, fearing his dad was dying," she said. 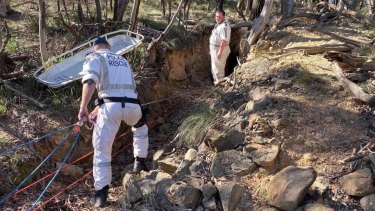 The rescue of Brad Osborne back in May.

Much of the central west's state forest land is in legacy mining areas. Forestry Corporation of NSW admits it does not know all the locations of old mine shafts but says it's working to identify and remediate them.

Sunny Corner State Forest, which is popular with riders and hosts an annual trail bike rally, was the site of Australia's first successful silver mine and smelting operation in the late 19th Century.

Jason Molkentin, regional manager for Northern Softwoods at the Forestry Corporation, said he was concerned to hear about the accident but emphasised there are hazards in the forests.

"In terms of the particular number of mine shafts, that's unknown," he said. "We know that it was a well-used mining area and we are progressively identifying mine shafts in that section of state forests."

Shafts could be remediated by being filled in or blocked with physical barriers, he said, but in the meantime, visitors are advised to take responsibility for their own welfare.

In 2016, Manly trail bike rider Lachlan Smith fell down a shaft at Sunny Corner and it is believed at least one other person has fallen down a shaft in another state forest since then.

Dembele was allowed to participate in the match with Bayern. He hasn't played since November
Porto signed Portuguese goalkeeper Ramos
Ferdinand on the Golden ball: If I were Levandovsky, I would create a petition. It's cruel
Bernardo Silva on the Champions League: Liverpool are out, Real Madrid are out, but it won't make our path any easier. Everything can happen
Arsenal are outraged by Ozil's Interview. The player defended his decision to refuse a pay cut
Juventus is Interested in Gozens. Atalanta wants 30-35 million euros for the defender
Sabitzer about 2:1 with atlético: Leipzig didn't want to go home. We are determined to stay in Lisbon until the end
Source https://www.smh.com.au/national/nsw/the-pain-was-unbelievable-trail-bike-rider-who-fell-10m-down-a-mine-shaft-to-sue-20200701-p5585q.html?ref=rss&utm_medium=rss&utm_source=rss_national

'I acted as straight as I could so it would stop': Gay conversion outlawed

Pandemic begs the question: are we rewarding the right people?

What the world needs now is art

Back to the past: time travel to the era where love bloomed

At this global tipping point, empathy can help us build a better world

The arts inform everything: lunch with John Wood

When did America stop being great?

Well done, chaps. WTO future is in danger just when we need it most

Smashing NSW will have to wait for Rebel from Queensland

Top-shelf SUV for families on a budget

Sea-changes on the rise due to COVID-19

Magpies rising to the challenge of hub intensity

To calm down, shut up: a multitasker's meditation breakthrough

'Who are you?': how a sister helped her twin recover from a brain injury

130 days and counting: the bloggers who bring the news live

Gawn ruled out of Magpies clash

Big six weeks for Kangas to get “back on track”

The Ice Siren is a triumphant, otherworldly creation

Hunter to play Crows, trade speculation 'made up': Beveridge

New Law Council head: 'The culture of silence must be eliminated'

Caught in the endless spin cycle of life

In charge: Pendlebury back to face Demons

Original Mindbender had a convoluted career

Port Fairy Folk Festival will not go ahead in 2021

Treatment of Australian sheep in Jordan under investigation