He’s been dubbed the "Success Architect", a moniker earned leading countless Olympic athletes and other Australian sporting stars to the very top. And now Bill Nelson has emerged as a key figure in Penrith’s storied run to the grand final.

Nelson, of Total Performance Concepts, has worked with Ivan Cleary since his first coaching stint at the foot of the mountains. More recently, Nelson has also been working with the players to help shape the club's culture to ensure the Panthers fulfil their potential.

“The journey we’ve been on is one about how we bring this group together,” said Nelson, a former distance coach for the Australian swimming team.

“Culture is a very overused word; it’s a word that isn’t that well understood.

“It’s a buzzword in some respects, but it has validity if you understand it and know how to shape it, to get people to take ownership of it.

“One of the hallmarks with this team is they came to an agreement as to what they wanted to be as a football team.” 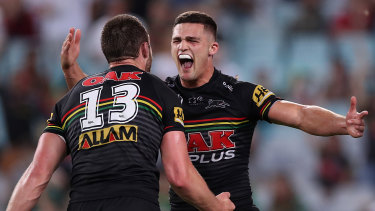 In a bid to foster trust, Panthers players regularly participate in "vulnerability sessions", in which they open up to each other about their personal and professional journey. The exercise has created a tight bond in a team that has won 17 straight matches.

Another hallmark of successful teams, according to Nelson, is recruiting players who uphold the club’s values, rather than just picking the best footballers.

“There are many phrases thrown around and ... one [at Penrith is] respect the past but create the future.

“That hasn’t been bandied about so much, but it’s a good platform to launch. 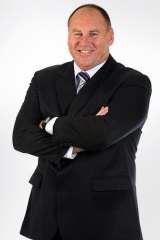 “A lot has been said about the earlier Panthers teams; there is a respect for what has come before.

“The fact of the matter is that 17 guys will run onto the field on Sunday night that have the honour and privilege to represent a club that is steeped in history. But they also have a responsibility to uphold the things people have done for them to allow them that opportunity.

“Is there a specific mantra? No. But there’s been a vision from day one to get to this grand final and win it.

“There is an understanding of what is needed to be done to allow that to happen.”

Nelson said the Panthers embraced the changes required to succeed after a disappointing 2019 campaign.

“They had an ability to recognise things had to change and had a preparedness to go on that journey,” he said.

“There was a huge level of trust between the players themselves and the staff. That’s the principle that makes this group work so well – they are all in.

“They needed to recognise that the world is full of unfulfilled potential and not to become one of those teams.”

Some love Ronaldo, some love Messi, but they can't even dream of the adoration that Maradona received. Ardiles about Diego
Argentina is drowning in tears. Maradona's coffin displayed in the presidential Palace
Dimitar Berbatov: Ramos will do well at Manchester United. Tiago Silva has proved that it is never too late to move to the Premier League
Maradona's lawyer: the Ambulance drove for half an hour. For 12 hours, my friend was left without medical supervision. Criminal idiocy
Gennady Orlov: I Don't agree that Messi is more talented than Maradona. Leo did not become the leader of Argentina
Wilshire about the lack of Ozil in the application of Arsenal: I'm surprised. He can play for any club in the Premier League
What to read about Maradona: how the Church named after Diego appeared, why he admired an unknown football player, how he got involved with drugs
Source https://www.smh.com.au/sport/nrl/the-success-guru-at-the-heart-of-penrith-s-rise-to-the-top-20201024-p5686f.html?ref=rss&utm_medium=rss&utm_source=rss_feed

Schools freed from COVID clamps, but easing hits wrong note for some

Scammers use puppies to prey on Black Friday bargain hunters

Australia are back on top – this time with a smile

From the Archives, 1986: By the hand of God and head of Maradona

Telstra faces fine of up to $50 million over unconscionable conduct

Salesforce rumoured to be in talks to buy Slack

One show, 350 artists make for a joyful celebration

Biden pleads with Americans to be careful over Thanksgiving

Jess has just turned 23, but in her eyes, she's celebrating her first birthday

'They're taking money out of the state': CBD retail poaching rolls on unabashed

'I feel so much better': Bitcoiners who missed rally express relief and regret

'The winter will be grim': US bracing for more economic pain

The tiny insect responsible for big problems at Brisbane Airport

Mixed day on Wall Street ahead of Thanksgiving

RIP Lupo: the loyal servants of the royals

State cutting it fine on $5.6b deadline

Not just physical: The DV behaviour to be outlawed

Inside deserted villas at centre of $20.8m court settlement

Schoolies rewarded for their bun-real behaviour

Man’s shenanigans get him kicked out of cup day

Save the dates: Coast bags NRL games for 2021

Dominic the demolisher a threat to our heritage

Your Daily Horoscope for Thursday, November 26