The Sydney suburbs most reliant on JobKeeper

Middle income workers living in a ring of outer Sydney suburbs are among the most reliant in Australia on the government’s JobKeeper wage subsidy.

The neighbourhoods most dependent on JobKeeper include Cronulla and Kurnell in the electorate of Prime Minister Scott Morrison as well as suburbs within marginal seats including the western Sydney battle ground of Lindsay.

While some inner-city suburbs are heavily reliant on the wage subsidy, a new JobKeeper reliance index shows the highest proportion of residents receiving the payment are in an arc of outer suburban neighbourhoods.

That ring stretches from the northern beaches, where Freshwater and Brookvale have been hit hard, to the north west including Kellyville and Dural. It then extends through Sydney’s outer west and south west especially Warragamba, Camden and Mt Annan and to suburbs in the south including Cronulla and Lucas Heights.

The JobKeeper breakdown comes as Bureau of Statistics figures showed the disruption caused by coronavirus pushed the unemployment rate in NSW to an 11-year high of 6.4 per cent last month. More than 270,000 jobs have been lost since February with a slump in women's employment accounting for 53 per cent of that decline. 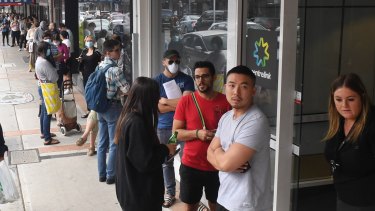 Unemployment in NSW rose to an 11-year high in May.Credit:Nick Moir

The state’s participation rate, which measures the share of adults in the workforce, fell to 62.1 per cent last month, the lowest in 16 years.

Unemployment would be far worse if not for the $1500 a fortnight JobKeeper subsidy which the government says is supporting 3.5 million workers.

But the scheme is due to be withdrawn in September raising the prospect of a further deterioration in the labour market later.

Many suburbs with a high share of workers on JobKeeper are within Liberal-held federal electorates and marginal seats, underscoring the political risks for the government of scaling back the subsidy.

The JobKeeper reliance index developed by Taylor Fry, an actuarial and data analytics consultancy, rates every suburb according to how many of its residents are likely to be receiving JobKeeper. It uses data on JobKeeper take-up from the Bureau of Statistics in combination with the most recent census to rank postcodes.

There were 44 mostly outer Sydney postcodes with an index ranking of 100 which put them among the 10 per cent of suburbs most reliant nationally.

The western Sydney neighbourhoods of Warragamba-Silverdale, Mount Annan-Currans Hill and Glenmore Park-Regentville had the city’s highest proportion of residents on JobKeeper while Cronulla-Kurnell, Kellyville and Erskineville-Alexandria were among the 10 most affected suburbs.

Alan Greenfield, principal at Taylor Fry, said a concentration of workers in some industries shows up in the regional distribution of JobSeeker recipients.

“In southern Sydney, for example, residents have suffered from the enormous impact of the travel restrictions on the aviation industry,” he said. “In western Sydney, a relatively high proportion of residents are in construction-related fields which have felt the impact of reduced economic activity.”

Mr Greenfield said many suburbs with a lower share of JobSeeker recipients have still suffered a significant financial impact.

“Residents of suburbs closer to the city centre are more likely to be working in white-collar jobs,” he said.

“A common theme here is that their employers have seen a significant drop in revenue, but not always enough for the business to qualify for the JobKeeper scheme. As a result, many have received reduced hours or pay, or even lost their jobs.”

Atalanta captain Gomez is the first Serie A player in the twenty-first century to give 15 assists in a season
Manchester City arranged a championship corridor for Liverpool
Mohamed Salah: I hope to stay in Liverpool for a long time
La Liga President: Many try to justify failures on the field by talking about rest and schedule
Rivaldo on Griezmann: I Don't understand why the world champion and multi-million dollar transfer only comes out at the last minute
The Doctor Sociedad: The Youngster from serious injury. We are not currently considering the option of surgery
Klopp made Liverpool Champions. Now it's your turn: the game Showsport
Source https://www.smh.com.au/national/nsw/the-sydney-suburbs-most-reliant-on-jobkeeper-20200618-p5541l.html?ref=rss&utm_medium=rss&utm_source=rss_national

Restrictions ease today: What you can and can’t do