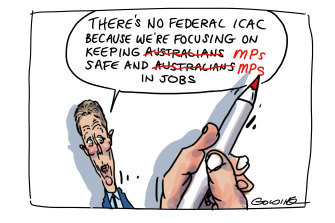 To submit a letter to The Age, email letters@theage.com.au. Please include your home address and telephone number.

There is too much money sloshing around Canberra that is not being scrutinised – the Border Force payments to Austal are just the tip of the iceberg. The budget cuts to the auditor-general (and the ABC) and the under-resourcing of the Australian Commission for Law Enforcement Integrity show that accountability is being actively undermined.

In the caretaker period April 1 to May 18 last year, $50 billion in untendered contracts were let, including $42 billion in defence going to multinational weapons companies such as Lockheed Martin, Boeing, Thales and Rheinmetall.

Confected outrage over watches worth less than $20,000 is a smokescreen. We urgently need a well-funded integrity commission with real teeth.
Margaret Beavis, Carlton

Change the way we think
Ninety-nine days of aged care royal commission hearings, a final report due in February, plus the effects of the pandemic adding weight to its recommendations, should see good results for compassionate overhauling of aged care in Australia over the course of the next decade.

In response to the pandemic opening our eyes to the deficiencies of our aged care system, it is also time for us as a society to change the way we currently think and talk about, and interact with ‘‘older people’’, with a corresponding shift in attitude and language of media reports.

People are people whatever their age – every person, from the newborn through to the 90-plus-year-old, merits the same human and consumer rights, the same respect, and as much interest from others around them, as those whom we perceive to be ‘‘in the prime of life’’.
Ruth Farr, Blackburn South

Could we please know whose decision this was? It will save the expense of a judicial inquiry later on.
Jeff Moran, Bacchus Marsh

Our memories are short
Waleed Aly’s opinion piece (‘‘Does anyone care about integrity?’’, Comment, 23/10) raises some very troubling points regarding the public’s attitude to business andpolitical wrongdoing or misdemeanours.

All of the issues he cites are well known to us all, but the sad fact is that we have a very short memory when it comes down to it, ‘‘and when a truly consequential scandal arrives it will be too late to do anything about it’’. Of course he’s right. We are so fatigued by the constant stream of irregularities in government and business circles that each new episode barely rates, as they are considered the norm.

It seems as if many in positions of power have taken their cue from a book called Integrity: And How To Rise Above It.
John Paine, Kew East

They’ll get my vote
Waleed Aly’s article on corruption was depressing. With so many matters of serious concern exposed just last week, I’ve come to decide that whichever party commits to implementing a well-resourced, fully funded ICAC gets my vote.

Failure to do so will render our democracy invalid.
Barry Buskens, Beaumaris

Scrutinise this sector
It is right that governments should be held half accountable for lack of regulation and oversight when services or goods provided fail to meet standards, but why is the same attention not given to the private providers who fail to deliver the quality of contracted services?

We are told over and over that small government is best in order to allow the private sector to get on with the job.

The pandemic has shown how untrue this is.
Ray Cleary, Camberwell

A selfish act
If the idiots at the anti-lockdown protest on Friday cause another wave of COVID-19 through blatantly disregarding the safety measures of socially distancing and wearing masks, not only will it be the ultimate example of irony, they will also become public enemies in the eyes of all Victorians who have been trying to do the right thing and have had a gutful of their efforts being sabotaged by selfish morons.
John Howes, Rowville

We were warned
Crown Resort’s chair, Ms Helen Coonan, has finally but grudgingly admitted to some of the criminal behaviour in Crown’s operations now being exposed by the Crown inquiry.

The criminal and illegal behaviours the inquiry has so far uncovered have been predicted and warned about years ago by those who were opposed to the establishment of the casinos in the first place: academics, politicians, social service organisations, church leaders, church groups, other groups and many citizens.

They foresaw the criminal behaviour, the ruin of individual lives, the antisocial outcomes and many other ill effects that the establishment of casinos would introduce.

Hopefully, the outcome of the inquiry will provide effective corrections to this blight of a business operation.
Elvis Kipman, Killara, NSW

Be angry about this
The Prime Minister expressed anger at Australia Post CEO Christine Holgate spending thousands on watches for senior employees.

If only he would direct half his rage at the broken aged care system the federal government oversees, despite billions of dollars of taxpayer funds being handed, apparently free of accountability, to private providers.
Liz Turner, Frankston South

You represent us
Josh Frydenberg, Alan Tudge and Greg Hunt, you might be federal politicians, but remember, you were elected by Victorians to represent Victoria.
John Rosenbrock, Mount Martha

The Age's editor, Gay Alcorn, writes an exclusive newsletter for subscribers on the week's most important stories and issues. Sign up here to receive it every Friday.

Anton Ferdinand was racially abused in comments to a post about a documentary about racism and Terry
Zlatan is named player of the year in Sweden for the 12th time
Ronaldo scored the 70th goal in home matches of the Champions League, repeating the record of Messi
Brunu on the penalty given to rashford: it was important for Him to gain confidence. It doesn't matter who kicks if the team scores
De Ligt on 2:1 with Ferencvaros: Juventus needed to move the ball faster and act more assertively
The minges on debut for Barca: Very happy. I hope this is the beginning of something big and meaningful
You can ask in the locker room if you have the guts. Tuchel-journalist asked about the quality of the PSG game
Source https://www.theage.com.au/national/victoria/the-tip-of-the-iceberg-20201024-p56887.html?ref=rss&utm_medium=rss&utm_source=rss_feed

Victorian budget: Call to expand voucher plan to bring back thousands of jobs

Drunk nurse flees on wrong side of road after crash

$10k grant to provide vulnerable kids with the essentials

‘Skin cancer cost me my job’: Fired after just 2 hours

MEGA GALLERY: Party far from over for Noosa Schoolies

Direct flights from Victoria take off in time for Christmas

Closing the gap between books and braille

2200 lives lost: And no justice for broken families