The twin projects that will transform Sydney’s Bondi Beach

Plans to overhaul the heritage-listed Bondi Surf Bathers Life Saving Club on Sydney’s most famous stretch of sand have been given the green light, months before the beach’s revamped pavilion reopens to the public.

Waverley Council’s plan to upgrade the clubhouse, built in 1934, with better connections to the surrounding park and more space for female change rooms were approved by the Sydney Eastern City Planning Panel last week. 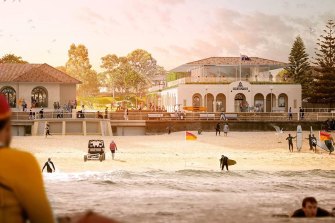 The project complements the council’s $25 million project to restore and upgrade the neighbouring Bondi Pavilion with changes to internal rooms, new seating in the theatre and conservation of the beachfront facade.

“It will be an attractor, I think. It’s going to be really beautifying the area and inviting people in and around,” she said. “At the moment it’s very hard to walk through because you’ve got this jumble of buildings, so I think it’s going to open it up.”

Under the plans, 1980s additions and temporary sheds that are considered unsympathetic to the clubhouse’s heritage will be removed. A public courtyard and kiosk between the clubhouse and the pavilion would improve access between the buildings, and make it easier to access the beach from the surrounding park.

The plans for the club – also known as Bondi Surf Club – include equal space for female and male bathrooms, improved disability access, more room for nippers, and community and training facilities, function space, and a museum.

Masselos said the building hadn’t been accommodating the needs of its female members in particular, and it was “absolutely essential it becomes modernised”.

Club president Brent Jackson has said the revised concept design – by architect Jesse Lockhart-Krause –proposed equal facilities for women, who comprised more than 40 per cent of the club’s new membership. 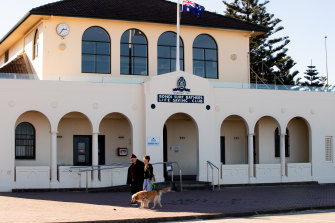 He said the changes would create more space for members of the club, which was founded in 1907, and for the public.

“We’re the oldest surf [lifesaving] club in the world, and the current clubhouse, built in 1934, is hailed for its exceptional cultural and heritage significance. This historic upgrade aims to enhance this,” Jackson said.

Plans to overhaul the Bondi Pavilion turned into largely a restoration project following years of grand plans and community backlash against the redevelopment, due to fears parts of the pavilion would be privatised.

Work is due to be completed, and the building handed back to the council, in late June or early July, before the site reopens to the public in September. 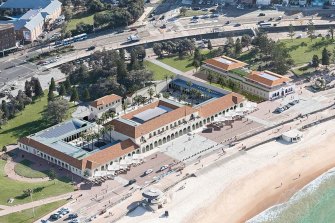 Plans to transform the clubhouse beside Bondi Pavilion will change the look of the famous beach promenade.Credit:Jesse Lockhart-Krause

The clubhouse and pavilion form part of the state and nationally heritage-listed Bondi Beach cultural landscape, which includes the surrounding Bondi Park and the North Bondi Surf Club. The listings recognise the strip’s embodiment of Australian beach culture. The beach was also declared a National Surfing Reserve in 2017.

“It makes the whole thing a mecca,” Masselos said.

Masselos said the pavilion and surf club projects “put heritage front and centre” and showed old buildings didn’t need to be knocked down – they could be restored and repurposed to give them greater longevity.

“The pavilion, for example, is more than 100 years old, and with the work we’ve done restoring it, it will be up for another 100 years. It will be a focal point that will draw the community and visitors.

“While there will be commercial tenancies at the front, as there always has been, the core focus for both of these buildings is community.”