Ghislaine Maxwell arrived in New York some 30 years ago as the young and glamorous emissary of her wealthy and influential father, an international man of mystery. Robert Maxwell was born Jan Ludvik Hyman Binyamin Hoch in the meager circumstances of an Eastern European shtetl. He lost most of his family in the Holocaust, escaped the Nazis and earned combat honours while fighting as a volunteer in the British Army under his new name, Ivan du Maurier.

After Germany's surrender, the resourceful young man persuaded the Czechoslovakian communist government to supply air power to the Israelis in their 1948 war for nationhood. At the same time, he was establishing himself under yet another name, Maxwell, amid the battered and dazed society of postwar England. He became a publisher, a dealmaker, a member of Parliament, an empire builder, a cooker of ledger books, a swashbuckler who persuaded the Oxfordshire council to lease to him a vast mansion donated for more-civic purposes by the family of Lady Ottoline Morrell, whose salon hosted the likes of Virginia Woolf and TS Eliot. 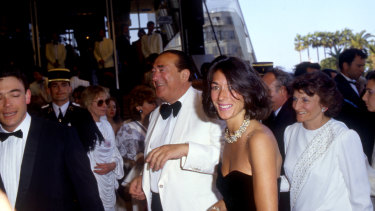 The youngest of Maxwell's nine children, Ghislaine, hosted parties at the mansion, known as Headington Hill Hall, while attending nearby Oxford University. Thus she learned the power of money in making glamorous friends. Where the money came from was of little importance - her father was known to British satirists as "the bouncing Czech" on account of his finagled finances. Access to wealth made one matter.

She delivered magnificently on her New York assignment, introducing the Maxwell brand to Manhattan's high society in time for daddy's purchase of the most widely circulated newspaper in the city at the time, the Daily News, in 1991. Maxwell's London tabloid war with Rupert Murdoch was going global. But no sooner had father and daughter scored their coup than it all fell to pieces. Mysterious to the end, Maxwell pitched over the side of his massive yacht, the Lady Ghislaine, on a quiet night off the coast of Spain as his empire collapsed into a rubble of looted pension funds.

Some said suicide. Some said murder. Some said heart attack. Some said a fat and sleepy old man had just lost his balance. Beyond dispute was the cold reality of Ghislaine's predicament: Her patron was dead, her family was broke and she was turning 30 in desperate need of a new financial wellspring.

An indictment unsealed July 2 in Manhattan's US District Court picks up the story not long thereafter: "From at least 1994 through at least 1997, GHISLAINE MAXWELL assisted, facilitated, and participated in Jeffrey Epstein's abuse of minor girls by, among other things, helping Jeffrey Epstein to recruit, groom, and ultimately abuse victims known to MAXWELL and Epstein to be under the age of 18."

Nearly a year after the arrest and fishy jailhouse suicide of wealthy serial sex abuser Epstein, his longtime friend and alleged procurer Maxwell has followed him into the hoosegow. Her arrest is a welcome sign that federal prosecutors in New York are serious about their promise to pursue this scandal beyond Epstein's death. The public still knows far too little about the sources of Epstein's jet-owning, mansion-hopping wealth; about his relationships with powerful men, including President Donald Trump, former president Bill Clinton, Britain's Prince Andrew, Harvard professor Alan Dershowitz, and billionaire Leslie Wexner; and about the nature of alleged photographs and possible video recordings seized from the safe in his Upper East Side townhouse. 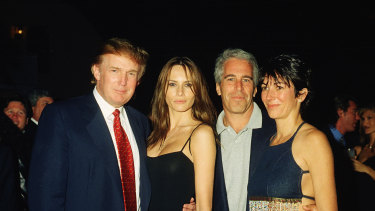 Maxwell likely knows as much about these matters as anyone living. However, after a lifetime of keeping up appearances on behalf of shady men, whether she'll become a cooperating witness is very much an open question.

Still, those dates in the indictment suggest that there is vivid testimony to be had about a lesser-known period in this sordid saga. They cover the years before 2008, when Epstein's Palm Beach sex-trafficking scheme resulted in his conviction for soliciting prostitution involving a minor – the gentle wrist-slap that Florida prosecutors settled on after a massive intervention by Epstein's high-priced team of legal stars. Girls recruited girls, who recruited other girls in turn to "massage" a creepy guy in a mansion.

Each new circle of recruitment added a little distance between Maxwell and her friend's insatiable, felonious, perversion. The indictment returns to the beginning - before she allegedly assembled the hierarchy – when all the coaxing and misleading and hands-on instruction of vulnerable children, according to prosecutors, fell to Maxwell herself.

Ghislaine Maxwell is no slacker in the mystery department. Perhaps instead of inheriting wealth from her father, she inherited his gift for shifting identities in the struggle to survive. She tried "Epstein's girlfriend", according to people who knew the pair in the 1990s. At some point, however, he must have broken the news to her that he wasn't into grown-ups. So, the indictment suggests, she adopted a more indispensable persona: his networker.

Now, as men in his cabal watch nervously, another identity beckons: betrayer of Epstein's secrets.

Ronaldo, Messi, van Dijk, Sancho and Lewandowski - in the team of the season according to WhoScored
Maurizio Sarri: Juve are happy to have won perhaps the most difficult championship in the history of Serie A
Aubameyang is close to extending his contract with Arsenal until 2023
Rodri: Hazard is one of the best players in the world
We hit the Manchester United check for Alexis Sanchez: one goal – 11 million euros, a minute of playing time-20 thousand
Pep Guardiola: if Manchester City want to win the Champions League, they need to improve their defensive performance
The Premier League clubs voted against 5 substitutions next season
Source https://www.theage.com.au/world/europe/the-world-still-knows-too-little-about-epstein-s-secrets-but-maxwell-holds-the-key-20200704-p558ze.html?ref=rss&utm_medium=rss&utm_source=rss_feed

You Can Run, But You Can’t Hide: Derbyshire Police Use Drone to Catch Runaway Suspect

'We need to have a look at it': Souths boss urges clubs to consider private equity

'That’s always been the modus operandi': Hasler opens up ahead of 400-game milestone

The Australian photographer inside a sanctuary for rebels

Myer hashes out deal with lenders as COVID-19 sinks shopping

Your Daily Horoscope for Friday, August 7

What Aussie SMEs can learn from Greeks

Koalas' bushfire recovery diet a cause for hope

Build your dream in Howrah

Arrests Made During Protest Near Portland Police Precinct

The economic crisis is still to come

Advice to Melbourne from someone who's done it before

Saints go to second with thrilling win over Suns

‘Can’t do that’: NRL erupts over ugly acts

Cyber spy agency to be called in to protect critical infrastructure

400,000 extra out of work by Christmas as lockdowns hit economy

The significant value of the older generation

More companies to get JobKeeper from September in $15 billion backflip

An extra 400,000 Australians out of work by Christmas as lockdowns hit economy

NRL 2020 as it happened: Roosters prove too classy for dour Dragons

Compressed fixture may have contributed to Treloar injury: Buckley

The hills are alive with legless spiders