The American Utopia Spike Lee has captured on film is not the stunning show the former Talking Heads frontman David Byrne brought to Australia in 2018. Well, not exactly.

When the tour wrapped after its Australian dates in November of that year, "we had a little break," says Byrne from his home in New York. He didn't sit around twiddling his thumbs: he turned his mind to how this concert might be repurposed as a Broadway stage show – and it's that show Lee captured on film. 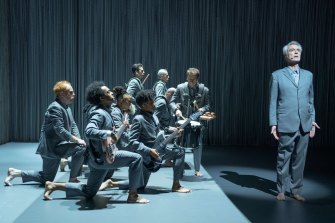 "I realised it's a different animal, the Broadway audience is different," says Byrne, who at 68 is still an enormously sprightly, lively and full-voiced performer. "They're coming for a show, and they need a little more convincing than a concert audience, who might be up and dancing by the third song or so. A Broadway audience, that's not going to happen."

His response was to develop "this kind of follow-the-dots experience of little stories and ideas to help turn the thing into a kind of journey or narrative".

And how would you describe that narrative? "In retrospect," he says, laughing. "Putting the show together it was a little more intuitive."

It turned out to be a show about social evolution. "It starts with a guy holding a brain sitting at a table, talking about what parts of the brain do what. He's living inside his own head, but gradually he connects with a group of other people – in this case, the band members – so there's a little community, they're all starting to work together and having a pretty good time. And by the end of it they collectively relate to the larger world. They become more politically and socially engaged. They turn further outward and engage with the larger society.

"They're the three steps I saw in the show. But I never explain that to the audience; I think for the most part people kind of sense it." 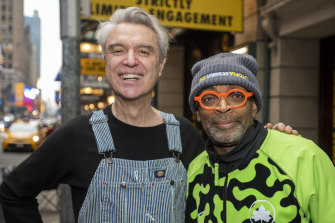 Anyone familiar with the lyrics of Byrne, or forays into other media such as his 1986 feature True Stories – will know "explaining" isn't high on his to-do list. You might also suspect his motives in pitching the idea of an "American utopia". But in this show, he seems to swap his trademark irony for a genuine sense of wonder, even befuddlement, and a desire to work through that to some sort of optimistic resolution.

"Yeah, I think that's fair," he says. "In the past some of the songs I've written or performances or whatever have been somewhat ironic, but in this case that's stripped away. The title of this show could easily be taken as ironic but it's not. It's asking, 'What do we want, how can we change, how can we make things better?' It is asking all those things in a very sincere way, but in a way that turns out to be a lot of fun too."

Capturing the ecstasy of a great concert on film is no mean feat. Lee leaves the show to do the work: other than a few fancy camera angles and a top and tail that take us briefly into the world outside the theatre, it's pure performance.

Byrne and his 11 fellow musicians are dressed in identical grey suits and bare feet. They wander freely about the stage, untethered by cables or risers, dancing to rhythms and making them. The chainmail walls on three sides rise from the floor during the first song, Here, in which Byrne takes us on a guided tour of his brain, and to the ceiling in the last, the a-capella track One Fine Day.

In 1984, Jonathan Demme captured Byrne's band Talking Heads at their peak in Stop Making Sense, one of the greatest concert films ever made.

"I watch a lot of theatre or music performances – especially now, when all of us are watching a lot of things on screens that we might have gone to see live before – and some of them work really well and some get boring really quickly," Byrne says. "It's really tricky to translate a stage show into something that really communicates that excitement onto screen.

"I've been very lucky; I've done it twice. Another 30 years," he says, laughing heartily, "I'll do another one."

Atalanta and Sevilla have agreed on the transfer of Gomez. The midfielder will fly to Spain on Tuesday
Laporta on Messi at PSG: I read that they have losses. We need to discuss what deals they can afford
PSG offered Ramos a contract for 45 million euros for 3 years (Onda Cero)
Nacho tested positive for the coronavirus. He was in contact with the patient earlier
Bale scored in the FA Cup for the first time since 2013. He has 4 goals in 13 games at Tottenham
Frank Lampard: I didn't have enough time to take Chelsea to the next level
Ozil will receive 3 million euros in Fenerbahce from July. Lifting - 550 thousand
Source https://www.smh.com.au/culture/movies/david-byrne-on-american-utopia-it-could-be-taken-as-ironic-but-it-s-not-20201126-p56i8r.html?ref=rss&utm_medium=rss&utm_source=rss_culture

‘I just didn’t want to be on a tennis court’: O’Connell’s remarkable rise from boat cleaner to Australian Open