The songs still get stadium audiences to their feet, have featured in no shortage of karaoke nights, and influenced generations of musicians – and a quarter of a century later, we're still turning Oasis' album (What's the Story) Morning Glory up, not off.

Critics greeted the album with a lack of enthusiasm when it was released in 1995 and, at the time, Liam and Noel Gallagher's antics arguably got as much attention as their music. In 1996, The Sydney Morning Herald's Bruce Elder wrote, "Have a little humility, guys. You are no more than the next bright flower in a lengthy daisy chain of musicians who are inconceivable without The Beatles. Will anyone in 25 years be able to say the same about the legacy of Oasis?".

But fans recognised (What's the Story) Morning Glory as something special. 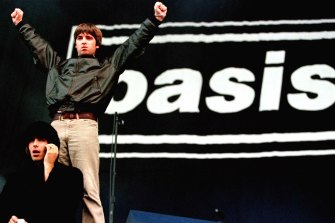 Noel and Liam Gallagher salute the crowd at the first of two sell-out concerts at Loch Lomond in Scotland.Credit:Reuters

In Australia, the album spent five weeks at the top of the charts and 54 weeks in the top 50. It is certified eight-times platinum, having sold more than half a million copies. Wonderwall, the album's most successful single in Australia, peaked at number one on the ARIA charts the week after it topped the Triple J Hottest 100.

The album marked Oasis' shift from an indie band from Manchester to bona fide global superstars and heralded the start of the Britpop era, setting the ground for artists including Blur, Radiohead, Arctic Monkeys and the Spice Girls. The record's influence on Australian music can be heard in the works of The Superjesus, Jet, and contemporary stars including the DMA's and Dean Lewis.

In a promotional interview released on Friday to mark the 25-year milestone, Noel Gallagher said he could finally understand the album's enduring appeal.

"Often I've wondered, what's a f---ing 14-year-old getting out of this after all these years, you know when I'd see them at the gigs? I understood it today. Because there's nothing around today that even remotely f---ing comes near to it." 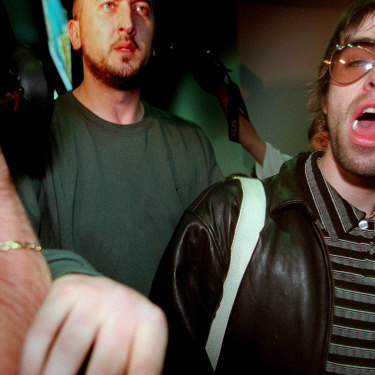 Their legacy as recording artists

Tim Rogers from You Am I says "we weren't exactly contemporaries but we certainly felt a kinship with Oasis. We started a little bit earlier and on the other side of the world with different trajectories but we could definitely recognise how much fun they were having. A band hadn't been seen to enjoy success like them for so long which was, frankly, quite refreshing. And I think that came across in the album too, as a band, we could recognise the fun of it. 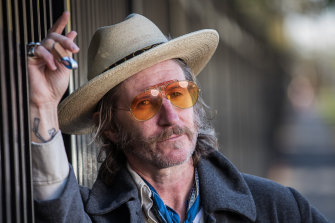 'They were a masterful studio band, what they did on the second record... it was very dynamically recorded, it sounds very good coming out of the jukebox, it's very expansive and with the guitar histrionics of the title track it just sounds like a band having real fun in the studio. It's just very appealing music.

"I'm a fan of Noel as a person and I like a bunch of songs he's written. But Noel would freely admit that he wanted to hear those songs sung in terraces by a lot of people. Sometimes you'd read the lyric sheet or actually hear what was going on and go, 'Oh, really?' But 30, 000 people can't be wrong.

"I mean you're not going to hear 30,000 people sing about waterlogged f---ing football. What you will hear them sing about is a champagne supernova and slowly walking down the hall faster than a cannon ball."

Their influence on Australian music

Nic Cester from Jet says "I remember hearing (What's the Story) Morning Glory and feeling like there was finally something happening in the world of music that really resonated in a more profound way with me. I guess it was more of a positivity in attitude, like there was a self belief. 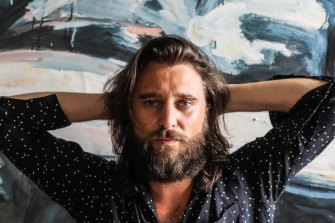 "Listening back now it sounds a little of its time, you know, but at the time it was so big and bold and brash. I think, especially when you are young, when you hear something like that it kind of gives you a green light to go for it and do that yourself.

"Touring with them was exactly like you imagine it would be, like there is nothing fake or phoney about them, they are exactly as they come across. I think the only way you can sort of pull off having that kind of attitude is if you back it up, they were larger than life personalities.

"I was in London with Liam [last month] and he still has the same effect, he is still the biggest personality in the room. Right after that tour finished and Oasis came to Melbourne, and Liam came to my house and I had just recently finished Shine On and I showed him that and he absolutely loved it.

"I remember at the time thinking it was such a huge moment for me getting the thumbs up from someone like him. He still talks about that song to me now. I think he knew the significance of it to me at the time."

Their legacy as pop songwriters 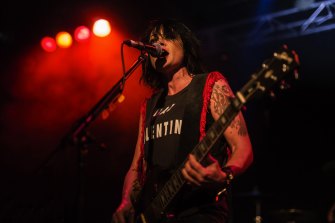 Their impact on music production

Michael Tramonte from The Delta Riggs says "it was the time when this English style of production came through that was really understated and going against what was happening in the States; it just let the song do the talking.

"They'd sent [the album] around to a couple of people and they couldn't get it right so they sent it to the guy that was mixing their live shows. And it sounds like that. It sounds like, when you put on that record, you're in a hundred-capacity club show listening to a band riffing.

"I think that's also what helped them stand the test of time. Oasis still hold a spot in our hearts. It was such a pivotal time, it was all over the radio and it was a new sound."

Their impact on style

Elliott Hammond from The Delta Riggs says "if you could have a walk like anyone you would want a walk like Liam Gallagher. That shot of him walking onto stage in the Supersonic documentary in that white coat, it's like... f---, that is a walk. It's swagger, basically, and that's very alluring as an adult.

"But it's not about the clothes, or the haircut. It's like, all that comes second, it starts with the walk. No one is dressing like Bono, even though you could argue he is the bigger star or has bigger popularity.

"Every show we play you get these dudes with the haircut, the parkas, they've got the swagger because he has inspired a generation of people to have confidence in themselves.