‘They’re not dinosaur movies’: Sam Neill on the enduring appeal of Jurassic Park

Jurassic Park was the first film I ever saw in the cinema. I was three years old.

My parents were uni students and couldn’t afford a babysitter, so they took me along. They both loved going to the movies, but my dad was particularly excited about the fact that Jurassic Park was the first film to feature digital surround sound. 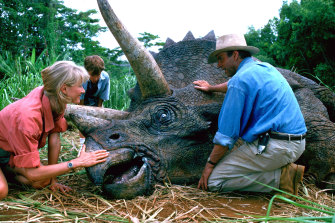 Jurassic Park, starring Laura Dern and Sam Neill, at one point held the record for the highest-grossing film of all time.Credit:AP

My lasting memory of that experience is me jumping out of my chair and running out of the cinema, screaming, during the film’s first terrifying Tyrannosaurus rex encounter. Despite (or perhaps because of?) the horror of that incident, Jurassic Park remains one of my favourite movies.

Thirty years later, and thanks to multiple sequels, reboots and reboot sequels, Jurassic Park is one of cinema’s longest running and most financially successful franchises. The original film raked in more than $1 billion at the box office, and the franchise’s total gross is over $7 billion.

It’s a pretty extraordinary figure considering how few of the films in the series have managed to capture the magic of the first: the chemistry of the original cast, particularly the dynamic between Sam Neill, Laura Dern and Jeff Goldblum, the wonder of hearing the soaring theme for the first time, the realistic, animatronic dinosaurs that seemed to bring the park to life, and themes that transcend the seemingly straightforward narrative of a theme park gone wrong.

Why has Jurassic Park endured for decades?

The latest film, Jurassic World Dominion, has just been released in movie theatres and it comes closest to recreating the sense of wonder that made the first film such a success – largely because it’s the first Jurassic Park movie since 1993 to reunite Neill, Dern and Goldblum.

Nearly three decades on from when Neill’s Dr Alan Grant first took on velociraptors and won (and rendered me a blubbering mess in the process), who better to help unpack the franchise’s enduring legacy than Neill himself?

“It’s popular entertainment. But it’s curious – baffling, in fact – that some things that are pop, are not disposable. Some of the most memorable, popular music was made to be effectively disposable. But you can’t kill it. It goes on and on. And there’s something about Jurassic Park. I think it was a sort of milestone in cinema in that it demonstrated that you could use these enormous animatronics in combination with this brand new CGI stuff. You could create worlds, only our imagination would limit it. And what better way to demonstrate that but to bring back creatures that lived 60 million years ago?” 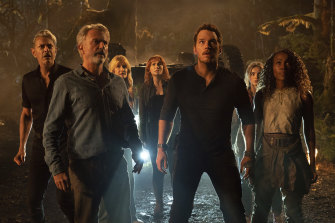 The dinosaurs were real (sort of)

Neill touches on a theory I’ve always had about why rewatching Jurassic Park remains so rewarding. Released in 1993 it predates the CGI-heavy action films of the late 1990s and early 2000s. Those films now look dated because the visual effects are so retro. But with Jurassic Park Spielberg and his team relied on using real robots when bringing the dinosaurs to life. Because they largely eschewed CGI, the film actually looks more modern in many sequences than movies that came years later.

“I think that’s absolutely right. The T. rex is a real one, it makes you believe it when there’s poor children locked in the car and something breathing all over the clear sky roof,” Neill says of one of the film’s more terrifying sequences.

“Everything was sort of relatable, you’ve got the children right beside the dinosaurs. It’s always seemed like a tangible experience.”

The first film had perfect pacing

But according to Neill, it’s not just the animatronics. It’s also the pacing and sense of discovery that made Jurassic Park so compelling.

“I always think it’s the dark that makes the light. It’s the silence that makes the bang loud. Nothing happens in that first one for about 45 minutes. And then it’s all on. There’s something about Jeff [Goldblum] and I sitting in that car, and there’s a glass with water that starts to just tremble. That gives everything a sense of being really terrifying.”

The relationship between Neill’s Dr Grant, Dern’s Dr Ellie Satler and Goldblum’s Dr Ian Malcolm, as well as the supporting cast, helped elevate Jurassic Park to be more than just an action film with some robotic wizardry. According to Neill, those relationships are really what the film is all about.

“People call them dinosaur movies,” he says of the franchise. “They’re not really dinosaur movies. They’re people movies, and dinosaurs make appearances and wreak havoc but they’re really about the people in the films. The bad guys and the strong women and all that.”

Of course, there are also dinosaurs. And in Dominion there are real (animatronic) ones too.

“We had full on dinosaurs, we had these fantastic dinosaurs, more complex than even the original ones,” Neill describes excitedly. “And we’re not in a green-screen world, we’re in an actual three-dimensional world with three-dimensional dinosaurs. And it’s way, way easier to be working with something that is three-dimensional rather than someone roaring with a tennis ball on a stick.”

In an era where so much of cinema is tennis balls on sticks roaring at other tennis balls on sticks, it was refreshing to hear that my own reasons for loving Jurassic Park – the intimacy with both dinosaurs and people – were the result of conscious decisions by those involved. And it’s particularly exciting to see a willingness to recreate the magic.