Hydroxychloroquine should not be used to treat or prevent coronavirus, the government’s official COVID-19 evidence taskforce has recommended.

The strong recommendations, made on the basis of multiple studies of thousands of people, should largely bring to an end the strange, twisting saga of a little-known rheumatoid arthritis drug that shot to fame as a supposed miracle curefor COVID-19. 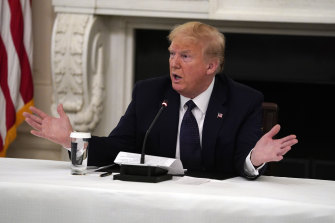 US President Donald Trump tells reporters that he was taking zinc and hydroxychloroquine on May 18. Credit:AP

US President Donald Trump called hydroxychloroquine a "game changer" in March and said he had been taking it.

In April, mining magnate Clive Palmer donated nearly 33 million doses of the drug to help fight the virus in Australia, calling it the "best hope" for patients with COVID-19.

But since then, the tide of scientific opinion has turned against the drug. Most major Australian hydroxychloroquine trials have now shut down.

One trial continues to run – with the scientist in charge insisting there remains no evidence to show the drug does not work for prevention. 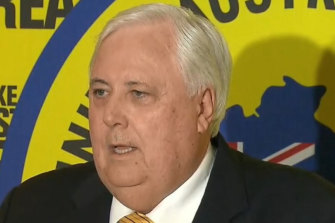 Associate Professor Julian Elliott, executive director of the National COVID-19 Clinical Evidence Taskforce, said his team was “essentially making the strongest recommendation we can to not use hydroxychloroquine".

“It’s an evidence-based recommendation. We have high certainty that hydroxychloroquine is not effective for the treatment of COVID-19 and there is strong evidence it has significant harms.”

The taskforce, which is funded by the federal government, reviews published and unpublished data from studies and trials around the world every day, using a careful method set up by the Cochrane medical policy organisation. It then issues clinical recommendations.

Professor Elliott’s team combined the results of six trials of hydroxychloroquine for the treatment of COVID-19, featuring 5866 participants.

The pooled results show the drug does not cut mortality, or shorten the amount of time a person with coronavirus spends in hospital. It also exposes them to side effects including heart damage.

“The numbers now stack up in a way that gives us a high degree of confidence,” Professor Elliot said.

Initial interest in the drug came from a March paper showing the drug was a potent antiviral against COVID-19 – in a lab dish.

The failure to translate those results into humans demonstrates what scientists often warn of: results from cells in a lab are usually not repeated in people.

“There are a lot of things that can destroy the virus in a Petri dish – like kerosene," Henry Woo, a professor of surgery at the University of Sydney, told The Age and The Sydney Morning Herald in April.

The taskforce's recommendation left open the possibility of using the drug in clinical trials – but most of Australia's hydroxychloroquine clinical trials have already closed down.

A trial of hospitalised COVID-19 patients run by the Doherty Institute removed hydroxychloroquine from its study last week.

A similar trial run by Monash University, has done the same.

However, the Walter and Eliza Hall Institute-led Covid Shield trial, which is testing whether hydroxychloroquine can protect healthcare workers from catching COVID-19, will still go ahead.

“The question around using hydroxychloroquine as a preventative has still got substantial merit,” said Professor Marc Pellegrini, one of the study’s lead investigators.

Professor Elliot said the evidence was starting to point to the drug not working for prevention either.

Two studies, with a combined 3135 patients, showed the drug did not prevent COVID-19 infections. But that is not enough data to conclusively show the drug does not work for prevention.

Lyon values Aouar over 40 million euros. Arsenal offered 35
Tottenham are not selling Mourinho's merch - because Chelsea still own the trademark rights. But it didn't stop Manchester United
Shomurodov is close to moving from Rostov to Genoa for 8 million euros (Sport Italia)
Pobegalov about 12 cases of covid in Shinnik: I hope we can start training by October 4
Kulchiy is likely to become an acting coach of Dynamo. They want to keep Novikov in the club's system
Due to covid, the Premier League season may be considered prematurely completed if the 2/3 and 3/4 rounds are completed
Bayern could give Nübel a loan deal if Ulreich stays at the club
Source https://www.smh.com.au/national/thumbs-down-for-hydroxychloroquine-from-government-virus-taskforce-20200806-p55j76.html?ref=rss&utm_medium=rss&utm_source=rss_feed