If Melbourne forward Tino Faasuamaleaui wins the grand final on Sunday night, it will go down as his second-best accomplishment of the season.

So say Gold Coast Titans powerbrokers who are already chuffed with Faasuamaleaui playing a huge role in making sure David Fifita joined him on the holiday strip next year.

Faasuamaleaui will look to finish up with the Storm in style before he joins the Titans on a three-year deal along with his friend Fifita.

Titans boss Dennis Watt knows any big-game experience Faasuamaleaui gains will only serve to benefit the Gold Coast, while adding how they were already grateful for his behind-the-scenes work in getting Fifita's signature across the line.

"He certainly played his role in persuading David to join him at the Titans," Watt said. "He was relentless in ensuring his close friend was going to join him to help turn the club around.

"They both indicated they wanted to take on the challenge of lifting the Titans up the ladder, and they're looking forward to playing together." 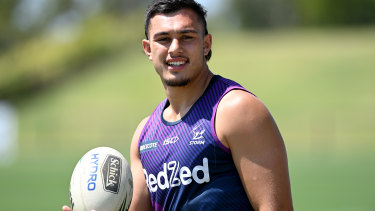 Watt said if Faasuamaleaui could win the title, it would further prove his ability to handle the pressure in the big games. The chance to welcome a premiership winner at just 20 years of age only further vindicates the Titans' early pursuit of the Samoan international.

Faasuamaleaui, Fifita and Payne Haas were inseparable when they toured Fiji with the Prime Minister's XIII team last year, and Haas told The Sun-Herald he could not be more excited for his friend to have a chance to win a title at such a young age.

"I'm pretty proud he's got this far and it would be special for him and his family as well," Haas said.

"He played Prime Minister's with me last year and I know how good he can be. You could see then what potential he had.

"He's got a great running game and can defend well - he's hard to get past and he's hard to tackle - so he's the complete player."

Haas joked there was no way of joining his mates at the Titans, "especially now David has taken all the money", but added another Haas, Payne's younger brother Klese, would join them in the pre-season.

Faasuamaleaui played just the five games last year but run around every week this year for the Storm except for the final-round defeat against St George Illawarra when Craig Bellamy rested a heap of regulars.

The Samoan flavour will be strong with Faasuamaleaui to lock horns with Penrith trio Moses Leota, Brian To'o and Jarome Luai whom he all played alongside this time last year in a Test against Fiji.

I would sell Messi in the summer. Economically, it was desirable. Acting President of Barca Tusquets on the crisis
Lopetegui about 0:4 with Chelsea: They deserved to win, but the gap in the score was excessive
Premier League clubs will no longer be able to sign players under 18 due to Brexit
Pirlo about 3:0 with Dynamo Kiev: I'm happy. Juve must always play to win
Giroud on possible departure from Chelsea: Let me enjoy the win, I scored 4 goals. Then let's see
CSKA's last home game in the Europa League. Finally win?
Casillas-Ronaldo: just 750 goals? You can do better 😏
Source https://www.theage.com.au/sport/nrl/title-would-cap-tino-s-storm-rise-but-he-s-made-titanic-difference-elsewhere-20201024-p5687x.html?ref=rss&utm_medium=rss&utm_source=rss_feed

UN agency to remove cannabis from list of most dangerous drugs

Courts are the wrong place to tackle drug use

Bend it like Phoebe: What a rising teenage star from Orange shares with Beckham

Qantas' remarkable turnaround comes with a lingering hangover for Joyce

Woman rushed to hospital after shooting at home north of Brisbane

The gentle quietness in the art of Seamus Heaney

Please Explain podcast: Are we really out of the coronavirus recession?

Australia 'ahead of schedule' on COVID-19 vaccine plan

'I will cut your head off with a knife': Camilleri made threatening calls to business, court told

A family teetering on the edge in a story of life, death and the GFC