"Who the hell is Kon?" the chief reporter asked, as if what we had just seen was somehow my fault. A white Greek man – the first white man in a generation, the first Greek in a millennium – had just won an Olympic sprint final. His name was Konstantinos Kenteris. Nobody, including his rivals, had seen him coming, and he burst through the middle, his head tilted backwards, his expression in some dreamy elsewhere, a Chariots of Fire moment. I went off to find out who the hell Kon was. 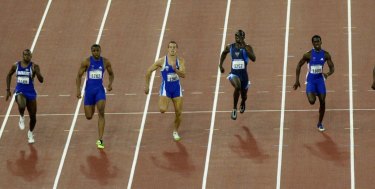 Kon Kenteris races towards the finish line in the 200-metre final of the 2000 Olympic Games.Credit:Will Swan

It was a dizzying privilege to have been in the stadium when Michael Johnson won the men’s 400 metres, Jonathan Edwards the men’s triple jump, Maria Mutola the women’s 800m and Haile Gebrselassie the men’s 10,000m. Cathy Freeman’s 400m was too tense for enjoyment, too compromised by the gut-twisting empathy for the pressure she was carrying in her bodysuit.

Maurice Greene, the fastest man on earth, had so little charisma he almost sucked it out of the stadium. Jai Taurima’s duel with Ivan Pedroso was on the far side, a special show for the people not sitting by the finish straight. There were disappointments, such as seeing Hicham El-Guerrouj and Wilson Kipketer beaten. The ultimate mixed emotion is the memory of the dominant athlete of that week, Marion Jones, and her treacherous smile.

Back to Kon. The men’s 200m had been dominated by Americans since the 1930s. Johnson or Greene would probably have won it, but both had been injured during the US trials. There was still a strong American battery led by a former footballer, John Capel. Britain’s Darren Campbell, Trinidad and Tobago’s Ato Boldon and Barbadian Obadele Thompson were the threats. Half the starters wore sunglasses.

The 200m is my favourite sprint event. The 100m is over too fast. The 400m is painful. The 200m offers just enough distance for a runner to come back from a mistake or lose a commanding lead, yet when they slingshot off the corner, you feel you have never seen humans run this fast.

Capel was the first gone: he flinched in the blocks, expected to be called back, and almost gave up. Boldon, in sunnies, led through the turn. Halfway down the straight, it was a blanket finish, Campbell looking the winner, until Kon surged. He finished like a golfer scoring six straight birdies when everyone else is struggling for par. In a few surreal seconds, a perfect effortless symphony of muscle and rhythm, Kenteris became the Olympian invented by his ancestors. 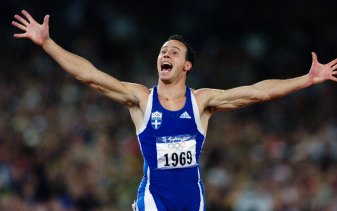 There wasn’t much back-story to be gathered before deadline. Kenteris was a physical education teacher who trained with Ekaterini Thanou, who had chased Jones home in the 100m a few nights earlier. His English wasn’t great, and trackside he seemed spaced out by his win. He was already talking about Athens 2004.

But Kon would turn out to be a con. He kept his form going for the 2001 world championships but then dropped out of sight. The day before the 2004 Athens Olympics, he and Thanou were accused of staging a motorcycle accident to avoid a doping test. They were rubbed out of their home games, at which they were to take as big a role as Freeman had taken in Sydney.

The pair would later be acquitted of criminal charges that they staged the crash but they were found guilty by the Court of Arbitration for Sport of anti-doping violations over the missed tests and Kenteris never competed again.

Neither was stripped of their Sydney medal, but in punishment for her offence, Thanou was not elevated from silver to gold when Jones, who won five medals in Sydney, was found to be one of the biggest drug cheats of all time. Kenteris kept his gold medal, as he never tested positive.

What of the memory? The Sydney Games leave complicated feelings. Johnson’s last-ever Olympic run, a triumphant final leg in the men’s 4x400m relay, was a fraud. The team he anchored was stripped of their medal for drug cheating. Four of the team's six runners - Antonio Pettigrew, Jerome Young, Alvin Harrison and Calvin Harrison - later tested positive or admitted to drug use. Lance Armstrong won a medal in the cycling time trial. Several weightlifters tested positive. Overall, Olympic testers didn’t catch up with the druggers for another few games, but all this means is that we know in Sydney there were cheats who got away with it.

So are those memories poisoned? What if other idols – surely nobody was more beloved than Marion Jones – were, in some final judgement day, found to have been drug-assisted? The truth strips them of their medals. What does it do to our memories?

It’s one of those things that sports watchers have learnt to hold in suspension: you admire everything about what you have seen, while balancing it against doubt.

Jones’s majesty, just like Ben Johnson’s in Seoul in 1988, created imagery that is not erased, but recalibrated. Everything becomes conditional: Jones’s Sydney magnificence is tainted of course; yet was she the only one, or just the only one who got caught?

With Kenteris, the play of memory is complicated by the fact that he never delivered a positive swab, even if commonsense throws up doubt. Did he enjoy an unfair advantage? Only if you assume no athlete in that race was using drugs. We just don’t know. All the supposed pleasure of sports – the clear confirmation of ascendancy, the classification of human endeavour into gold, silver, bronze and other – is taken away.

This is the legacy of drug cheating in Olympic sports. It has concrete consequences for those involved, while for those of us watching, it compromises the images we hold in our mind’s eye. What did we end up knowing of Kon? One thing for sure: in 20.09 seconds, one unheralded Greek burst from nowhere to the top of the world. We will never know whether he only broke the mould because he was on the juice.

Malcolm Knox is a journalist, author and columnist for The Sydney Morning Herald.

Fati is the youngest goalscorer in the Clasico. He broke Raul's 1995 record
Ramos is playing his 31st match against Barca for Real Madrid in La Liga. He repeated the record of Raul and hento
Pep Guardiola: Manchester City lost 7 points - that's a lot. But problems arose for various reasons
Sandro Schwartz: Dynamo played intensely and scored 3 goals. We wanted to be more active in the attack
The tour in Italy started with a cool comeback with 6 goals. But it was difficult to see, because the main star was a dense fog
Guardiola supported Aguero, who put his hand on the shoulder of the female referee: Everything was fine. He has repeatedly put his hand on me
Courtois before Clasico: The best nine in the world is playing in Real Madrid
Source https://www.smh.com.au/sport/athletics/too-good-to-be-true-for-athlete-no-one-saw-coming-20200810-p55kf6.html?ref=rss&utm_medium=rss&utm_source=rss_feed