Washington: President Donald Trump declared on Monday that the appointment of the special counsel in the Russia investigation is

"totally UNCONSTITUTIONAL!" and asserted that he has the power to pardon himself, raising the prospect that he might take extraordinary action to immunise himself from the ongoing probe.

In a pair of early-morning tweets, Trump suggested that he would not have to pardon himself because he had "done nothing wrong." But he insisted that "numerous legal scholars" have concluded that he has the absolute right to do so, a claim that vastly overstates the legal thinking on the issue.

In fact, many constitutional experts dispute Trump's position on his pardon power, an issue for which there has been no definitive ruling.

Trump's assertion that "numerous legal scholars" believe he could pardon himself ignores the one official opinion on the subject. In August of 1974, just days before former President Richard Nixon resigned, the acting head of the Justice Department's Office of Legal Counsel, Mary C. Lawton, said in a memorandum that "it would seem" that Nixon could not pardon himself.

She wrote that such a pardon would appear to violate "the fundamental rule that no one may be a judge in his own case." But she did not explain how that principle would limit the constitutional power of the president to pardon.

In the wake of Trump's tweets, Senator Charles Grassley, a Republican from Iowa, chairman of the Senate Judiciary Committee, told reporters that "if I were president of the United States and I had a lawyer that told me I could pardon myself, I think I would hire a new lawyer."

Trump also did not elaborate in the tweets about the legal basis for his claim that the appointment of Robert Mueller, the special counsel in the Russia case, was unconstitutional. In that tweet, he insisted that "we play the game because I, unlike the Democrats, have done nothing wrong!"

For many months after Mueller's appointment last year, Trump avoided directly challenging the special counsel. His lawyers at the time argued that the best way to bring the probe to an end was to cooperate fully and avoid public criticism.

But that strategy changed after Trump overhauled his legal team, and in recent weeks the president and his new attorneys have become openly dismissive of Mueller and his team of prosecutors. 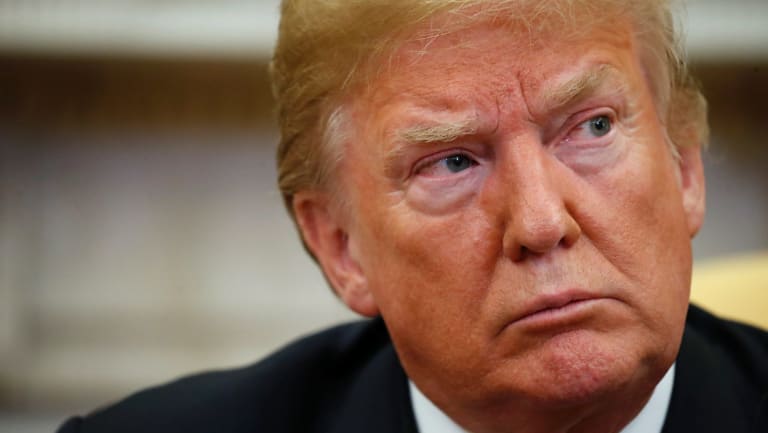 Still, Monday's tweets by the president went further in attempting to undermine the legal basis for the investigation into whether people on Trump's campaign colluded with Russian meddling during the election and whether anyone in the administration tried to cover up their activities.

The president's assertions came in tweets just a day after Rudy Giuliani, one of his lawyers, told HuffPost that Trump is essentially immune from prosecution while in office, and could even have shot the former FBI director without risking indictment while he was president.

Giuliani also said over the weekend that the president "probably" has the power to pardon himself but said on NBC's "Meet the Press" that it would be "unthinkable" for him to do so.

Doing so, Giuliani said, would "lead to probably an immediate impeachment," adding that he "has no need to do that. He didn't do anything wrong."

Trump's statement about pardons on Twitter went further than Giuliani and raises the prospect that the president might try to test the limits of his pardon power if Mueller tried to indict him for obstruction of justice in the case. Mueller has indicated he does not plan to seek an indictment, according to Giuliani.

In his tweet, Trump again called the investigation a "never ending Witch Hunt" and said it is being led by "13 very Angry and Conflicted Democrats."

The comments by Trump and Giuliani about the legal limits of presidential power follow a report in The New York Times that the president's lawyers had authored a 20-page memorandum in January arguing that Trump could "if he wished, terminate the inquiry, or even exercise his power to pardon."

In the memo, sent to Mueller's office in January, the president's legal team said that the president cannot, by definition, illegally obstruct any part of the Russia probe because the Constitution gives him the power to end it in the first place.

The president also tweeted Monday morning about trade, asserting that Canada has "all sorts of trade barriers" on US agricultural products. "Not acceptable," he said. He also bragged about his accomplishments at the 500-day mark in office.

Shortly after, the White House echoed that sentiment with an email to reporters titled: "President Donald J. Trump's 500 Days of American Greatness."

Fabregas on the best coaches in their careers: Guardiola, Mourinho and Wenger. The way Jose played with my mind was unbelievable
Napoli will extend the contract with Gattuso until 2023
Henri knelt for more than 8 minutes in the first match in charge of Montreal, honoring the memory of George Floyd
Kalu moved from Herta to Botafogo
Goalie of the banner of Labor, who was hit by lightning: everything is good at the moment. Back soon
Ole Gunnar Solskjaer: I Think it was a penalty against Aston Villa
Philadelphia played in t-shirts with the names of black people who died at the hands of the police
Source https://www.canberratimes.com.au/world/north-america/totally-unconstitutional-trump-issues-shrill-tweets-in-his-defence-20180605-p4zjg4.html?utm_medium=rss&utm_source=rss_feed

Wondering about 'sonder'? A word for our times

Plotlines: fear for the tropics

If the NRL wants to change the world, it must separate education from punishment

'Not necessary': US killing of Qassem Soleimani was unlawful, says UN expert

'It makes it all worthwhile': NRL's most selfless partner on months of isolation and a five-try reward

On my mind: Kerry Armstrong

Big week for trio as trainers take the reins