A gap year was never on the cards for Barker College student Sam Kyprianou. But upon the recommendation of his year 12 teacher, he put university plans on hold earlier this year and packed his bags for south-west Queensland to work on an outback cattle station.

Within weeks he had adventured on quad bikes and helicopters, travelled across the Northern Territory border, and camped off-grid with a group of four workers in their 20s who have since become close friends. Despite suffering a broken foot along the way, he has no regrets. "It was probably the best thing ever," he said. 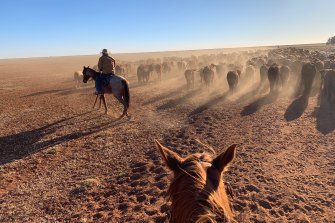 Sam Kyprianou's view of the cattle station from atop a horse, as he worked during his Queensland gap year.Credit:Sam Kyprianou

Three-quarters of year 12 students who planned on taking gap years next year have said they no longer will due to international travel restrictions. But the tourism industry is urging students to reconsider an Australian gap year, where opportunities range from road trips to adventure packages and working holidays.

"I compel younger Australians to look at some of these options," Mr Westaway said. "It’s one of those sliding door moments for school leavers. If they're not able to go overseas in a hurry, they should take advantage of the opportunity. Our regions would love to see visitors."

A survey of 1000 potential gap year students by school-leaver service Year13 has found that 68 per cent now plan to go to university, 14 per cent to TAFE and 6 per cent to an apprenticeship.

But Year13 founder Saxon Phipps said year 12s who wanted to take a gap year should go ahead with the idea, as a year off often helped students avoid burnout, improve their grades upon return, and become more employable by learning new skills.

"Most importantly they can help make a young person happier," he said. "In the grand scheme of things, one extra year to find what they want to do, especially after the most hellish year 12 experience in many generations, is nothing. They’ve earned a break and the right to spread their wings a bit, even if it’s just in Australia." 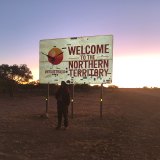 Sam Kyprianou, from Sydney, at the Northern Territory border. He travelled through much of western Queensland while cattle mustering on a gap year.Credit:Sam Kyprianou

Mr Phipps said only half of school-leavers ended up completing the post-school pathway they had chosen at the end of year 12. "While we know for many [gap years are] about getting out and seeing the world, for others it's needed so they can just take some time to work out what it is they really want to do with their futures," he said.

"For young people like this we really encourage them to think about taking a gap year in Australia instead of potentially going into a uni degree or some other course they don’t truly have their heart set on."

Mr Kyprianou says independence was the most important skill he learned while away from home. "Living on your own and supporting yourself, as well as meeting new people, was one of the biggest things," he said.

"I was always a person who thought you go straight to uni, get ahead of the game. But it’s just a great experience the best part about it is you’re in such a scenic place."

'There's a whole range of experiences'

Wendi Aylward, managing director of the Australian branch of the American Institute for Foreign Study, has been putting together travel and work packages for domestic Australian gap year students. They include a Queensland cattle muster, northern NSW surf camp and eco-holiday options in the Great Barrier Reef and Daintree Rainforest.

"It's still very much about having an immersive cultural experience in your own backyard and exploring parts of Australia a young person wouldn't normally head to," she said.

Each package will be capped at 20 young people for COVID safety and will include a travel adventure with the option of staying on for facilitated work opportunities.

Mr Westaway said backpacker numbers - typically 150,000 at any time - had fallen by 50 per cent during the pandemic, leading to a vacuum of seasonal work vacancies that young Australians could fill.

"In Broome, they can’t fill enough roles to meet the existing demand coming out of the Perth market. The Whitsunday Islands have always struggled getting workforce," Mr Westaway said. Resorts are also eager for workers, especially in off-grid locations in central Australia or the Northern Territory.

Jobs available range from bar work to waiting tables, customer relations and accommodation support. There are also opportunities in experiential and adventure tourism, to process visitors or become a guide.

"It will require them to travel away from where they’re from... You're in essence working with people roughly the same age, you get to spend time outside, and enjoy our great country. It's hard work, but at the same time one would hope it’s rewarding," Mr Westaway said.

Students can also use the time to trace the travel routes of backpackers. Juicy Vans general manager Brendan McKenna said the cost of some trips would be on par with travelling Bali or Thailand.

"Road trips with a couple of mates – getting out for two to three weeks or up to two months – are certainly on the increase and can be done quite cheap depending on the experiences they want," he said.

"The big thing with the gap year - it doesn't all have to happen at once. You can do smaller trips - almost treat Australia as Europe. You've got all these different experiences in different parts, and it's choosing the ones you want."

The Pacific coast is the most popular route: from Sydney to Cairns, taking in beaches, the Whitsunday islands, as well as inland detours around the Hunter Valley and Noosa. Other travellers go base to base: inland from Sydney towards Mildura and the Victorian Alps, before swinging across to Adelaide, Kangaroo Island and the Eyre Peninsula.

Meanwhile the winter months are an ideal climate to travel the top end of Western Australia, the Northern Territory and Cape York. "On the way there's everything from mango picking to driving tractors on the grain farms and harvesting, to fixing fences or working in outback pubs for a small time," Mr McKenna said.

"There's a whole range of experiences to meet some locals [students] normally wouldn’t associate with – either coastal or rural and regional. Experiences you can’t replace that’ll be with you for a lifetime."

Arteta about 0:1 with Leicester: I Don't know why the hell our goal was canceled. It is difficult to create space when 10 people are sitting behind the ball line
Rodgers on 1-0 with Arsenal: Leicester deserved to win. Vardy is a world-class player
Juve without Ronaldo could not beat Verona and Crotone in Serie A
Vardy has scored 11 goals in 12 games against Arsenal in the Premier League. Only Rooney has more
15,000 Teddy bears were planted at the Heerenveen match as part of a campaign to fight cancer. Toys sold for 230 thousand euros
Adidas and Pharrell Williams have reinvented the old forms of Real Madrid, Arsenal, Manchester United, Bayern Munich and Juve. The design is hand-made and celebrates imperfection
Barcelona filed a complaint about the refereeing of the match with Real Madrid to the Spanish football Federation
Source https://www.theage.com.au/national/treat-australia-as-europe-the-domestic-gap-year-options-opening-up-for-year-12-20200914-p55vki.html?ref=rss&utm_medium=rss&utm_source=rss_national