Two people in Sydney have been charged with spitting, while seven $1000 fines have been issued to people across NSW for breaching the state's public health orders.

In April, NSW Health Minister Brad Hazzard authorised an addition to the 2010 Public Health Act, which aimed to stamp out "intentionally spitting at or coughing on public officials in a way that
is reasonably likely to cause fear about the spread of COVID-19". 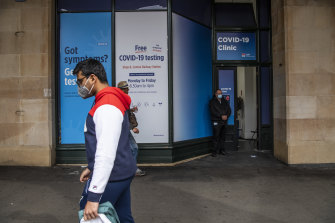 Police said that, on Wednesday morning, a 14-year-old boy, who appeared to be intoxicated, boarded a bus at Lane Cove, on Sydney's lower north shore, despite being told not to by the driver, who then called police.

The teenager then allegedly punched the driver on the head and spat in his face.

He was taken shortly afterwards by police to Chatswood police station, where he allegedly assaulted a police officer who was helping him to an ambulance.

After being released from hospital on Thursday afternoon, the boy was charged with several assault charges and a spitting offence.

He was refused bail and is due to appear before a Children’s Court on Friday.

On Thursday evening, police were called to home on Spit Road in Mosman to help paramedics. They allege that, while in the back of the ambulance, a 23-year-old woman spat in the face of two police officers and paramedics and that she bit the finger of a male officer.

She was released from hospital several hours later and charged with assaulting police and a spitting offence.

She was granted conditional bail and is due to appear in Manly Local Court on September 10.

A hotel on Darling Street, Balmain, was issued a $5000 penalty infringement notice for allegedly throwing a party for 30 people on Saturday.

The licensee of a hotel at Macksville on the NSW Mid North Coast has been issued with a $1000 fine after officers identified potential breaches during a visit last week. They said that a follow-up check revealed the breaches were not addressed, resulting in the fine.

A licensee of a business on Morgan Street, Wagga Wagga, was also fined $1000, for failing to implement a COVID-19 safety plan.

It's time to learn the names of new Borussia heroes. Now there are 17-year-old boys making goals
Paulo Fonseca: it's Important to bring Smalling back to Roma. We have only 3 Central defenders
Arteta about 2:1 with West ham: Arsenal made life difficult for themselves with losses, but they fought and believed in victory
Palace midfielder Townsend: Could have beaten Manchester United with a bigger difference. We had moments
Philippe Coutinho: I am motivated and I want to work hard to make everything work out well on the pitch
Torres on Chelsea: I Thought I could remain a top player, but I was unstable. Although there were enough successes
Neville on the broken penalty against Manchester United: an Absolute disgrace
Source https://www.theage.com.au/national/nsw/two-charged-for-spitting-seven-fines-issued-for-covid-19-breaches-20200814-p55luw.html?ref=rss&utm_medium=rss&utm_source=rss_feed