Two charged with murder after remains found in Glasshouse Mountains

Two people have been charged with murder after human remains were found at the Glasshouse Mountains on the Sunshine Coast earlier this week.

Forensic testing is under way on the remains, but police believe the identity of the person may be Donna Howe, a 57-year-old Caboolture woman.

Howe was last seen by family in late April.

Police have charged a 41-year-old man and a 31-year-old man, both from Caboolture, with one count each of murder and misconduct with a corpse, after executing a search warrant at a Balkee Drive property in Caboolture. 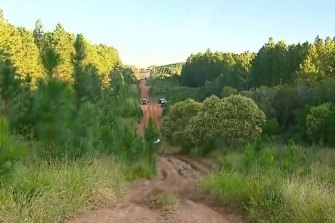 The remains were found in a remote forestry track around midday.Credit:Nine

They were expected to appear at Caboolture Magistrates Court on Thursday.

Police will allege both people were known to the victim.

The remains were discovered by two men four-wheel driving in the area.

Police on Wednesday said they were initially unsure if the remains were male or female.

“There is a cigarette lighter, and looks like there are some charred areas, but we’re just trying to ascertain if it is just decomposition black or actually charred,” Detective Senior Sergeant Craig Mansfield said.