There’s often a sense of surprise from customers when Uber driver Nathan Merritt arrives to pick them up.

The 33-year-old drives a blue Tesla, making him part of a small group of Uber drivers using electric cars. 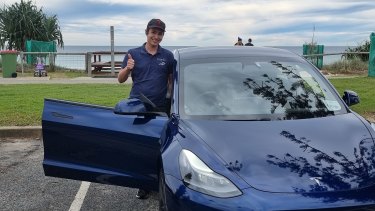 Nathan Merritt, 33, is one of a growing number of Uber drivers using electric vehicles.

“A lot of riders are always amazed about being in a Telsa for the first time,” says the Queenslander.

It’s something Uber wants to be less of a rarity for customers, with the global rideshare giant set to spend $26 million over the next three years cutting service fees in half for drivers who use battery electric vehicles in a bid to increase their use on the platform.

Uber won’t say how many of their drivers are using electric vehicles, but say it’s less than 1 per cent.

Australia is still lagging the rest of the world when it comes to EV uptake, making up less than 1 per cent of the million cars sold every year. But Taylor believes there is growing momentum around the technology and a will to create the right policy and infrastructure to increase their use.

“The resounding story of the election was the vote for climate. And so that’s why we’re really encouraged to work with the government, the Independents, the Greens and the Labor Party in working out how we can drive a step-change in our adoption of electric vehicles,” he says.

“There’s no doubt that Australia is coming from the back of the pack. We are behind our global peers when it comes to EV adoption. This isn’t a government problem only to solve. If we are going to catch up ... this is going to have to be private and public sector coming together.”

Labor has committed $500 million to help grow the uptake of electric vehicles, including cutting import tariffs and the fringe benefits tax on EVs that are cheaper than the luxury car tax threshold.

Taylor said rideshare companies have a critical role to play in the EV space, given their drivers travel many more kilometres than the average driver. 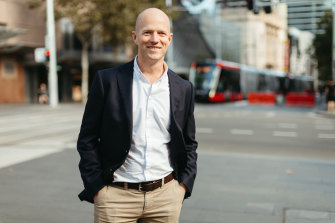 Uber’s incentive scheme for EV drivers announced on Wednesday has been trialled for the past 12 months, resulting in a quadrupling of the number of electric cars on the platform. The company is keen to address the main barrier identified by their drivers when they are considering buying an EV - the cost.

For the next three years, 2500 drivers who either already drive an electric car on the Uber app, or new drivers who upload an electric car to the platform, will receive a 50 per cent discount on service fees. The incentive will be capped at $3500 a year, and does not apply to hybrid cars.

Taylor says Uber is also talking to the industry in a bid to help improve infrastructure around charging the cars, which so far has been concentrated in high socioeconomic areas where luxury cars are more popular.

“We now have to be thinking about how do we create a distributed network of charging stations across our cities, in particular, in areas of lower socioeconomic income, particularly in areas where people don’t have off-street parking,” he says.

Uber driver Nathan Merritt, who runs the popular Tesla Owners Australia page on Facebook, bought his Tesla at the end of 2020, keen to save on fuel. While he says charging infrastructure will need to improve if more EVs are used for rideshare, he believes the money he’s saved on petrol has made it well worth the switch.

“I’m glad I made the decision to do it. It’s kind of like buying stocks. I saw which way the company was going to go. Now I’m reaping the benefits 100 per cent.”