Madrid: Spanish Prime Minister Pedro Sanchez has announced a new state of emergency in an effort to curb soaring coronavirus infections as the head of the United Nations declared that “the COVID-19 pandemic is the greatest crisis of our age”.

France also registered a record 52,010 new confirmed coronavirus cases over the past 24 hours, following a record 45,422 on Saturday, the health ministry said on Sunday, as the coronavirus continues to spread throughout Europe. 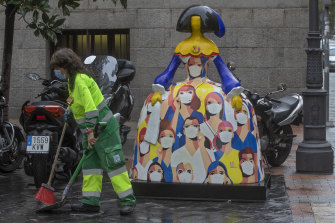 A tribute to medical workers in Madrid, Spain, where new restrictions have been introduced due to the spread of COVID-19.Credit:AP

UN Secretary-General Antonio Guterres opened an online session of the World Health Summit with a call for worldwide solidarity in the global crisis and demanded that developed countries support health systems in countries that are short of resources.

The coronavirus pandemic is the overarching theme of the summit, which originally had been scheduled for Berlin. Several of the leaders and experts who spoke at the opening stressed the need to cooperate across borders.

“No one is safe from COVID-19. No one is safe until we are all safe from it,” said German President Frank-Walter Steinmeier. “Even those who conquer the virus within their own borders remain prisoners within these borders until it is conquered everywhere.”

More than 42 million have been infected with the virus and over 1 million people have died of COVID.

Spain's new measures began on Sunday night, local time, and require all regions except the Canary Islands to impose a nighttime curfew and limit the number of people allowed to meet to six.

"We are living in an extreme situation ... it is the most serious health crisis in the last century," Prime Minister Sanchez told a news conference following a cabinet meeting.

Catalonia was one of the first regions on Sunday to use the new legislation to impose a curfew, which will take effect at 10pm. Establishments open to the public will have to close at 9pm.

Police were patrolling the city before the curfew took effect and locals welcomed the new rule.

"I believe that in a certain way a measure had to be taken because everything was getting a little out of control," said vocational training teacher Paula. "I think more measures will come, but it's a good start."

Other regions that announced curfews from Sunday night included Cantabria and La Rioja.

Spain imposed one of the toughest lockdowns early on in the pandemic and then relaxed curbs over the summer.

But like many other European countries it has seen a second wave hit in recent weeks, and now has one of the highest numbers of infections in Western Europe. Total cases rose to 1,046,132 on Friday, while the death toll is nearing 35,000.

The state of emergency will need parliamentary approval to last beyond 15 days. Sanchez asked for Parliament to approve its extension up to May 9.

A growing number of regions had been calling on the government to implement the measure.

The Madrid region had already limited the number of people who could meet inside homes to six, as well as banning the mixing of different households overnight.

Canary Islands vice president Roman Rodriguez tweeted he was "satisfied" the tourist hotspot had been excluded from the curfews but encouraged people not to let their guard down.

The islands hope to save their tourist season after the UK and Germany decided last week they were no longer a travel risk.

The decree will serve as a legal framework to implement a new warning system of levels, similar to the ones already applied in countries such as Germany and France.

According to the level of risk, travelling between regions could be banned if a regions decides, except for justified reasons such as working. Movement could also be restricted within regions in localised lockdowns.

Most of the regions are already above the parameters to be considered at the highest level of risk.

In France, the new cases took the total to 1,138,507, a total that now puts it ahead of Argentina and Spain to become the country with the world's fifth highest total, after the United States, India, Brazil and Russia.

The ministry said that 116 people had died from coronavirus infection over the past 24 hours, compared to from 137 on Saturday, taking the total to 34,761.

Van Dijk - best Central defender of 2020, Trent-right, Robertson-left (ESPN)
Massimiliano Allegri: Ronaldo is a top player in terms of mentality. He has a new goal every year
Borussia Dortmund presented a collection with Spongebob as part of a deal with Nickelodeon
Woodward on Manchester United and trophies: there is a lot of work Ahead to achieve the stability needed
Neuer - best goaltender in 2020, Alisson-2nd, Oblak-3rd (ESPN)
Liverpool are Interested in 21-year-old Leipzig defender Konate
Niko Kovac: I'm Waiting for Golovin to return. But it might be better to wait another week or two
Source https://www.theage.com.au/world/europe/un-head-calls-covid-the-greatest-crisis-of-our-age-as-spain-enters-state-of-emergency-20201026-p568i1.html?ref=rss&utm_medium=rss&utm_source=rss_feed