London: A senior lawyer in charge of an investigation into organ harvesting has urged the top United Nations human rights body to investigate evidence China is murdering members of the Falun Gong spiritual group and taking their organs for transplant.

Hamid Sabi called for urgent action as he presented the findings of the China Tribunal, an independent panel set up to examine the issue, which concluded in June that China's organ harvesting amounted to crimes against humanity. 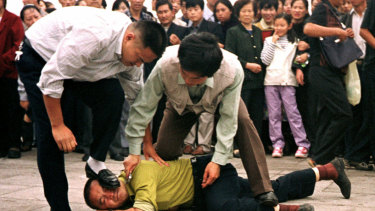 Police detain a Falun Gong protester in Tiananmen Square as a crowd watches in Beijing.Credit:AP/File

Beijing has repeatedly denied accusations by human rights researchers and scholars that it forcibly takes organs from prisoners of conscience and said it stopped using organs from executed prisoners in 2015.

But Sabi, Counsel to the China Tribunal, told the United Nations Human Rights Council (UNHRC) that forced organ harvesting had been committed "for years throughout China on a significant scale ... and continues today".

The harvesting has involved "hundreds of thousands of victims", mainly practitioners of the banned Falun Gong spiritual movement, he said, adding that detainees from China's ethnic Uighur minority were also targeted.

"Victim for victim and death for death, cutting out the hearts and other organs from living, blameless, harmless, peaceable people constitutes one of the worst mass atrocities of this century," Sabi said.

"Organ transplantation to save life is a scientific and social triumph. But killing the donor is criminal." 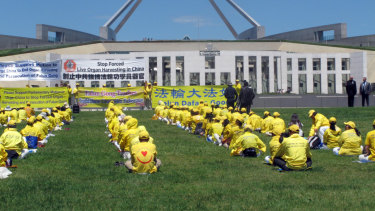 Falun Gong practitioners demonstrate outside the Australian Parliament House in Canberra in 2016.Credit:AP

Falun Gong is a spiritual group based around meditation that China banned 20 years ago after 10,000 members appeared at the central leadership compound in Beijing in silent protest. Thousands of members have since been jailed.

Geoffrey Nice, the tribunal's chairman, told a separate UN event on the issue that governments, UN bodies and those involved with transplant surgery, could no longer turn a blind eye to the "inconvenient" evidence.

"The time of convenient 'uncertainty', when all these entities could say the case against [China] was not proved, is past."

Transplant recipients in China include Chinese nationals as well as overseas patients who travel there to receive an organ at a substantial cost, but with a greatly reduced waiting time.

The tribunal said in June its findings were "indicative" of genocide, but it had not been clear enough to make a positive ruling.

A spokesman for the Chinese Embassy in London said then that government regulations stipulated that human organ donation must be voluntary and without payment.

Klopp on 2-0 with Chelsea: Mane was rewarded for Kepa's pressure. Perfect start for Tiago
Liverpool and Everton scored 6 points after 2 rounds of the Premier League. This is the first time since 1993
Lampard on 0:2 with Liverpool: a Serious mistake by Kepa. Without red and with a penalty scored, it would have been 1-1
Mane on Kepa's mistake: Knew he would have few options when he got the ball. He made a mistake, I scored
Will bale be revived at Tottenham?
Tiago broke the Premier League record with 75 assists per half - time-more than any Chelsea player in the entire match
Kroos on captains: Ramos is the best possible option
Source https://www.smh.com.au/world/asia/un-human-rights-body-urged-to-investigate-organ-harvesting-in-china-20190925-p52ust.html?ref=rss&utm_medium=rss&utm_source=rss_feed