Sydney defender Aliir Aliir has been handed an instant reprieve as the Swans found respite from their tall timber woes for Saturday's clash with Gold Coast.

The Swans will blood their third debutant of the season with small forward Elijah Taylor, the No.36 pick from last year's draft, one of four changes to the side which lost to Richmond last week.

Big men Callum Sinclair and Tom McCartin have been named to return from injury, providing the low-scoring Swans with some much-needed targets in attack. McCartin, who has missed three games due to concussion, needs to show on Friday he has recovered sufficiently from training in order to take his place in the 22.

It has been a taxing week for the Swans, who are reeling from the loss of Isaac Heeney for the rest of the season and skipper Josh Kennedy for six weeks.

The club has been decimated by injury, with superstar Lance Franklin and key forward Sam Reid headlining a crowded casualty ward. 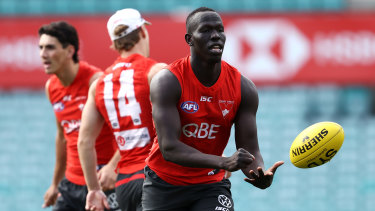 The Swans are 17th, above only winless Adelaide, with many tipping a second consecutive season out of the finals action.

They were given a pep talk by their injured co-captain Kennedy, who leaves a massive hole in the Swans' midfield.

"[He said] stick to what we know and back ourselves in, don't go listening to that outside noise and don't go reading into it," Swans defender Jake Lloyd said.

"It's important we stick together as a group and stay tight. We just work hard to get ourselves out of this. We might be 17th but we're only two games outside the top four, one game outside the top eight."

There was some consolation for the Swans on Thursday with Tigers coach Damien Hardwick apologising for his public criticism of opposing number John Longmire's tactics after a berating from his wife.

Hardwick had accused Longmire of flooding Richmond's forward line with "75,000 people" in their low-scoring game.

"It was a shocker on my behalf," Hardwick said. "It was out of line. I was probably frustrated and let the situation get the better of me.

"I called up 'Horse' and apologised. It was out of line on my behalf, so we had a good conversation and we moved on pretty quickly. I'll just worry about what I can control and continue to do that.

"[Mrs Hardwick] wasn't overly happy with the press conference. She gave me a dressing down after it. That was a good result."

The Swans are likely to host a crowd of no more than 4000 this week despite the SCG being allowed to hold 10,000 in accordance with state government regulations allowing for stadiums to open at 25 per cent capacity.

On top of AFL guidelines, the club has blocked the whole bay around the players' race.

Ødegård prematurely returned to the real world of rental Sociedade
Arsenal and Roma are discussing the exchange of Torreira for diavar
The trained bear was brought to the dressing room of the Sakhalin Resident
De Ligt had shoulder surgery and will miss 3 months
Modibo – infected with coronavirus Barcelona player. The disease passes without symptoms
Lichtsteiner finished his career. The former Juve and Arsenal defender is 36 years old
Matuidi left Juventus. The midfielder will move to Inter Miami Beckham
Source https://www.theage.com.au/sport/afl/undermanned-swans-recall-aliir-for-gold-coast-clash-20200716-p55csq.html?ref=rss&utm_medium=rss&utm_source=rss_feed