The strategic update which Prime Minister Scott Morrison launched in Canberra this week marks some important changes in the government's thinking about Australia's defence. It formally acknowledges that our own region should be the top priority, with US-led operations in the Middle East demoted. It also recognises that Australia needs to be more self-reliant, perhaps a tacit acknowledgment that the alliance with America is of diminishing value.

But there was one other announcement that got attention from journalists and commentators, a far-reaching new military program for the Australian Defence Force which Morrison described in anodyne military jargon as "longer range strike weapons". 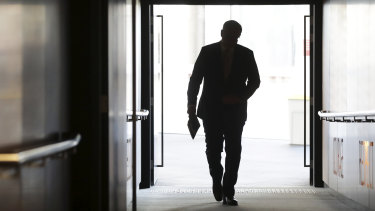 Prime Minister Scott Morrison at the launch of the 2020 Defence Strategic Update on Wednesday.Credit:Alex Ellinghausen

"Far reaching" has a double meaning here. Firstly, Morrison is talking about developing the ability to bomb targets potentially thousands of kilometres away, with high accuracy. But secondly, a capability like that could reshape our defence posture and our relations with our neighbours.

Morrison said Australia will develop weapons that are "able to hold potential adversaries, forces, and infrastructure at risk from greater distance and therefore influence their calculus of costs involved in threatening Australia's interests".

As you would expect, Morrison doesn't name the adversary, but it is safe to assume he meant China. Morrison is sending a message to Beijing that Australia is going on the offensive because, as he put it, "maintaining what is a highly capable, but largely defensive force will not equip us to deter attacks against Australia".

Is he right about that? The Prime Minister is arguing that the ability to hit an adversary at long range will deter them from taking military action against Australia in the first place. But as old soldiers sometimes say, the enemy gets a vote – when one side acts, the other side reacts. So we need to think about long-range strike weapons in terms of how they might influence the actions of our adversaries. 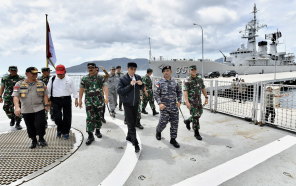 Indonesian President Joko Widodo visits a military base in the Natuna Islands, near the South China Sea, in January.Credit:EPA/Agus Soeparto

To be clear, Australia is not triggering an arms race with this announcement. In fact, it is Australia which is responding to the dramatic growth of Chinese military capabilities over the last two decades and the alarming build-up of its military facilities in the South China Sea. But the way we respond is up to us. We can design our defence force so that it deters China but does not provoke reactions that are destabilising to us and our neighbours.

Long-range strike weapons could provoke counter-reactions that will ultimately make Australia less safe. China could easily counter with the deployment of bombers to the bases in its artificial islands in the South China Sea, or by sending its ships and submarines into the Pacific Islands region more often. The deterrent effect we achieve with a relatively small force of long-range missiles would then by instantly matched.

The size of our long-range strike force would matter too. When the US Navy launches a few dozen cruise missiles at an enemy, the enemy knows there is plenty more where that came from. That's going to influence their decision about whether to hit back. Should Australia ever acquire missiles with the range to hit China or even the bases it has constructed in the South China Sea, the decision-making dynamics will be quite different. A few dozen missiles would perhaps be the limit of our available armoury and China's ability to strike back would dwarf ours.

That's why we're better off with weapons and strategy that don't provoke such a counter-reaction. The strategic update in fact makes some important recommendations in this regard. Australia is buying new anti-ship missiles which can protect our maritime approaches and we're investing in a new generation of naval mines. Then of course there is the submarine program. None of these weapons threatens Chinese territory but they would make it difficult and costly for China to threaten ours.

There's one other important complication arising from long-range strike weapons. It's not just the potential adversary we need to consider. As important as China is going to be for the future of our region, Indonesia will be even more critical. Yet Jakarta, and particularly its nationalist and sometimes paranoid national security establishment, is unlikely to be thrilled by Australia's long-range weapons ambitions. Some will even believe these weapons are aimed at them.

In the past, such suspicions hardly mattered to Australia because Indonesia was weak. But by the middle of this century it could well rank among the top five economies in the world, a nation of truly global stature. Australia will have a great power on its doorstep, one with the resources to deploy advanced long-range weapons of its own.

In short, Indonesia will be a power that Australia needs to have on side. Luckily, we have one crucial security objective in common: neither Jakarta nor Canberra wants south-east Asia to be dominated by Chinese maritime forces. Australia's long-term ambition ought to be to work towards that objective together. The relationship with Jakarta is far from that point now, but acquiring long-range strike weapons won't get us any closer.

Sam Roggeveen is director of the international security program at the Lowy Institute.