By Masaki Kondo and Ruth Carson

A nascent revival in the US dollar, after a summer of predictions about its demise, is highlighting why it's still the ultimate haven currency for some investors.

After abandoning the greenback due to the Federal Reserve's accommodative policy, traders are piling back in, leading to a squeeze of short positions. Liquidity, yield advantage and a lack of alternatives have helped to rekindle interest just as the US starts to get a handle on the coronavirus pandemic in some places. 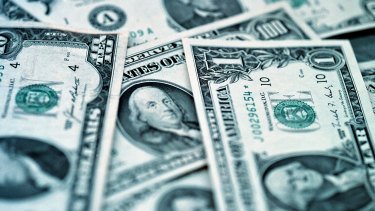 The US dollar has just had its best week since April. Credit:Phil Carrick

The Bloomberg Dollar Spot Index climbed around per cent this week, the biggest five-day advance since April. Technicals suggest more gains are in the pipeline. The gauge had dropped more than 10 per cent from its March highs to this year's low in September, as hedge funds increasingly turned bearish on the dollar. The Australian dollar was among the currencies hit hard to be currently fetching around 70.3 US cents. It started the week at around 73 US cents.

"The US dollar is the safe haven of choice until we get new information on the vaccine, earnings, election and stimulus," said Thomas J. Hayes, chairman of hedge fund Great Hill Capital in New York. "Until then, the dollar is likely to have bottomed in the short term."

Adding to investor concerns is data showing record new coronavirus cases in Europe and on Friday, the UK added London to its watch list of potential pandemic hot spots. That's crimping optimism that economic growth in Europe will materially outpace that of the US.

"There's been a clear erosion of the idea that Europe was 'doing better' than the US," said Kit Juckes, chief currency strategist at Societe Generale. Consensus growth differentials have "moved in the US's favour."

Still, history cautions that a further advance in the greenback is far from certain. The US currency also rallied in June but quickly gave back its gains as concerns about the global economic outlook receded.

The US Federal Reserve's lower-for-longer rates strategy is also likely to "put pressure on the dollar," Quentin Fitzsimmons, portfolio manager at T. Rowe Price, wrote in a note.

Here's a look at the US dollar's advantages in retaining its status as the supreme haven currency:

While futures indicate the Fed will keep the policy rate near zero at least until the end of next year, that isn't as dovish as the negative-rate policy adopted by the European Central Bank and the Bank of Japan.

At about 0.2 per cent, the greenback's three-month interest rate is the highest among Group-of-10 currencies after the New Zealand dollar, according to data compiled by Bloomberg. The dollar is expected to take pole position if the Reserve Bank of New Zealand goes ahead with a plan to deploy sub-zero rates to support growth.

A dearth of alternatives is another factor in the dollar's favour. Gold, which has gained almost 20 per cent since end-March to outperform the greenback, offers no yield and, in some cases, costs money for storage.

The yen is another traditional haven, but a collapse of its positive correlation with equity volatility suggests that this status is weakening.

The liquidity factor also supports the greenback. The currency's daily average turnover is five times that of the yen's and more than twice that of the euro, according to a report from the Bank for International Settlements in April 2019.

During the height of the coronavirus pandemic in March, a rush for the dollar triggered a spike in the greenback and a surge in its borrowing costs in foreign-exchange swap markets. That in turn prompted the Fed to boost dollar supply in cooperation with other central banks.

"There's still a great deal of confidence in the US dollar being the go-to currency when markets become very volatile," said Tai Hui, chief Asia market strategist at JPMorgan Asset Management. "A lot of investors are just being ready for a period of increased volatility which drives the dollar stronger."

Messi, Beckham, Robben, Figo and best are among the contenders for the title of best right-winger in history (France Football)
The Valenciennes goalkeeper said the Sochaux player bit him. He replied that he wanted to hit the goalkeeper with his head for racism
Azpilicueta about Kep: Sometimes everything goes against you. To overcome this, you need character
In memory of the beheaded teacher, all matches of the French championship will begin with a minute of silence
Klopp on van Dijk: we will wait for him like A good wife waiting for her husband from prison
Maguire and Cavani did not fly with Manchester United for the match against PSG
Italy is a view in Fortuna. The team plays in the second Bundesliga
Source https://www.theage.com.au/business/markets/us-dollar-regains-its-mojo-with-best-week-since-april-20200928-p55zs0.html?ref=rss&utm_medium=rss&utm_source=rss_business

Early Voters Gather at Polls in Broward County Despite Rain

Voter Line Stretches On and On at Coral Springs Polling Place

Brawl Breaks Out in Stands as Eagles Host Ravens

Family violence workers burnt out in midst of 'shadow pandemic'

Daryl and the pork barrel are an insult to taxpayers

'You can't just bank your dollars': What Rugby Australia is weighing up in broadcast talks

Fragility, not strength, at the heart of Chinese politics

From the Archives, 1987: Blood on the bourse as the market turns feral

In a year of enormous challenges, the HSC has become smaller

Foreign investment shake-up could be fatal to startups

'Giving back the streets': The plan to de-pave 800km of Sydney roads

Dual living in the Bay

Orchestra promises Melbourne a season that will uplift – and heal

Victoria is right to be cautious in exiting stage four

The Australian lawyer who built a booming practice on finding loopholes

'Worried that he was going to get sick': Fauci not surprised by Trump's COVID diagnosis

A record first day of voting sees more than 15,000 ballots cast per hour

Man flown to hospital after incident at prison in Lara

Back to work: Business owners happy to reopen after lockdown layover

We do not deserve this harsh sort of treatment

Council looks to sell off properties two years after buying them

Deb Frecklington refuses to take a stand on euthanasia

Could Granny be a Nana?

CalWood Fire Burns Into the Night Near Jamestown, Colorado

Sydney versus Melbourne: what the experts say about the COVID numbers comparison

Crunch time is over: HSC exams begin after the 'most uncertain year'

Renewed push for ICAC to be independently funded amid Maguire scandal

'It was a bit shocking': NRLW 'underdogs' motivated by bubble sacrifices

'Very willing substitute': Sydney ready to step in to save India tour

Family ties: Why Penrith's father-son duo isn't the only 2003 echo for John Lang

Patients 'out in the cold' as new rules exclude myotherapy massage

Free agency a disaster of the AFL's making

NSW-Victoria border could open within a month

NSW-Victoria border could reopen within a month

Free movement across borders would be a just reward for Australians

WA claims it was ambushed by 'failed' NZ travel bubble

'Black people are literally voting like their lives depend on it'

Why home wellness is spawning a plethora of business ideas

Life's a beach under travel extension to 25km

How some homebuyers can snag $70k in grants

‘ISOLATED FOR YEARS’: One state could be cut off from rest of Australia

Cameron tells Giants he wants to move back to Victoria

Cameron to leave Giants, linked with move to Geelong

Ardern's catch of the day: moral support from a good bloke