US stocks ended higher after another day of back-and-forth trading on Wall Street as investors wait to see if Washington can get past its partisanship to deliver more support for the economy.

The S&P 500 index rose 0.5 per cent on Thursday, after briefly turning negative, as investors handicapped the chances of a deal to send more cash to Americans, restore jobless benefits for laid-off workers and deliver assistance to airlines and other industries hit particularly hard by the pandemic. Data released in the morning painted a mixed picture on the economy, which contributed to the market’s sloshing around. 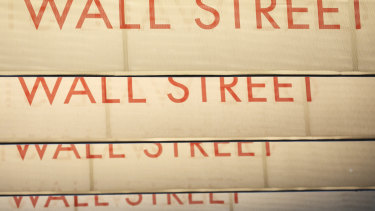 Wall Street had another day of erratic trading as investors are waiting to see whether politicians can agree on further stimulus measures.Credit:AP

The market was once again moving erratically. The Dow had been up 259 points earlier and down as many as 112. Such moves have become typical recently, with several big shifts in momentum pushing markets around within a day.

Data reports released in the morning painted a mixed picture on the economy, which also added to the market's sloshing around. One indicated the pace of layoffs across the country may have slowed last week, with the number of workers filing for unemployment benefits falling to 837,000 from 873,000. It’s a larger decline than economists expected, though the number remains incredibly high compared with before the pandemic.

But other reports showed that personal incomes weakened by more than expected and that growth in the country's manufacturing sector fell short of forecasts.

Other warning signs are also looming for the economy, which has seen some slowdowns recently after the last round of stimulus approved by Congress expired. The Walt Disney Co. and other major companies have announced even more layoffs this week, and the clock is ticking on Washington to offer more support.

Rising and falling hopes for a deal on Capitol Hill sent stocks on a roller-coaster ride on Wednesday, much as they have over the last several weeks.

“The market, for lack of really anything else to trade off of, has responded to these headlines on the potential for stimulus,” Wren said.

Treasury Secretary Steven Mnuchin and House Speaker Nancy Pelosi spoke for 90 minutes on Wednesday, and hopes for an agreement helped send the S&P 500 up as much as 1.7 per cent during the day. But after Pelosi said in the afternoon that they still had “areas where we are seeking further clarification,” the index gave up all but 0.1 per cent of its gain before resuming momentum at the end of the day.

The pair have worked effectively together in the past, and they helped drive through the previous economic rescue approved by Congress in March. But the country’s partisan divide has only deepened since then, which has stymied progress on aid that investors say is crucial for the economy. The election is only about a month away.

In Asian markets, trading on the Tokyo Stock Exchange was suspended due to a technical failure in its computer systems.

The Tokyo Stock Exchange said it plans for normal trading to resume on Friday. Officials said trading was halted early Thursday because rebooting the huge system after the malfunction would have caused confusion.

TSE President Koichiro Miyahara repeatedly apologised for the disruption to trading on the world’s third largest exchange, where about 70 per cent of brokerage trading both by value and volume is by foreigners.

The outage on the exchange eclipsed Japan’s main economic news of the day, the first improvement in manufacturing sentiment in three years, despite the pandemic.

Lucescu on the Juventus defeat: Maybe 0:2 is a lot for such a match. We played very well
Pique may miss the match with Juventus due to removal in the game with Ferencvaros
Gnabry contracted the coronavirus. Bayern play Atletico tomorrow
Fati is the first in the history of the Champions League to score 2 goals under the age of 18
Messi scored in the 16th consecutive Champions League season and repeated Giggs' record
Bruno did not score a PSG penalty at the first attempt, but the referee asked for an Interruption due to Navas' exit from the goal line
Koeman is the fifth coach to manage 6 teams in the Champions League
Source https://www.theage.com.au/business/markets/us-stocks-end-higher-after-erratic-day-as-markets-wait-on-washington-for-aid-20201002-p5618r.html?ref=rss&utm_medium=rss&utm_source=rss_feed