Yet the Sydney Festival, The Addams Family Musical and other events missed performance targets for attracting visitors to the state, risking part of their share of NSW government funding. 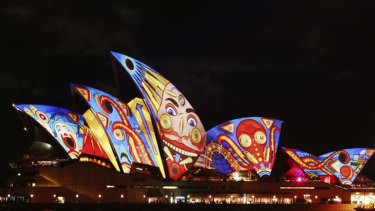 The Vivid festival is one of the cultural events that receives funding from Destination NSW, the state government's tourism and events agency.Credit:James Brickwood

The revelations contained in documents obtained under freedom of information laws prompted the Labor opposition to call for an independent review of funding for arts and cultural events.

Walt Secord, Labor’s treasury and arts spokesman, said: “[T]axpayers’ dollars have to be targeted at events that are well attended, enhance our cultural landscape and support jobs in the tourist and arts sectors.”

Destination NSW, the state government’s tourism and events agency, provides millions of dollars to arts and cultural events every year as part of its efforts to attract tourists.

But it drives a hard bargain in contracts with event organisers, which include providing tickets to shows in exchange for government funding. 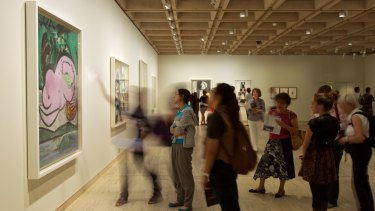 The Art Gallery of NSW was obliged to provide tickets and corporate hospitality to Destination NSW is exchange for government funding of its summer blockbuster shows.Credit:Domino Postiglione

The Art Gallery of NSW, which has received millions of dollars for international art exhibitions, agreed to provide hundreds of tickets, guided tours and private viewings to those shows.

It was also obliged in strategic investment agreements signed with DNSW to provide tickets to the Archibald Prize exhibition and complimentary venue hire.

The Sydney Festival and Sydney Opera House were among the other event organisers obliged to provide tickets and corporate hospitality in exchange for taxpayers’ money.

The contracts between DNSW and event organisers were contained in partially-redacted documents released under freedom of information laws following a four-year battle with the agency. 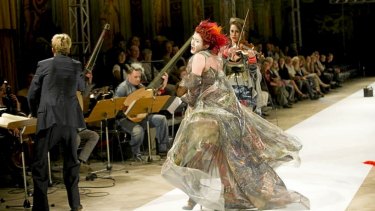 Semele Walk was staged at the 2013 Sydney Festival, which failed to achieve the visitor targets set by Destination NSW.Credit:Monika Rittershaus

DNSW faces referral to the Ombudsman after it lost the lengthy legal fight over information related to spending on major events such as Vivid, the Sydney Festival, musicals and art exhibitions.

A DNSW spokeswoman declined to answer questions about who benefited from corporate hospitality provided by event organisers. But she said in a statement that DNSW’s overall performance in attracting visitors has been “immensely successful”.

“A thorough assessment of each event is undertaken before it is supported by Destination NSW,” she said. “There is a diversity of performance across events and lower performing events are less likely to be supported into the future.”

Event organisers sign contracts with DNSW that also make part of their funding dependent on meeting key performance indicators such as attracting interstate and international visitors to NSW for the event.

Internal documents indicate the Sydney Festival regularly failed to meet visitor targets, putting at risk some of its government funding.

The agency also provided additional money if visitor targets were exceeded; up to $200,000 was offered to the AGNSW if 16,000 “unique” overseas and interstate visitors came to Sydney for the Francis Bacon exhibition - however, only 7324 did.

Some of the biggest gambles made by DNSW have been on stage shows and Indigenous cultural events.

The Addams Family Musical was offered up to $2.7 million by DNSW, yet missed its KPIs when it closed after just three months and attracted little more than half its target for out-of-state visitors.

The producer of Baz Luhrmann’s Strictly Ballroom the Musical negotiated for about $3.5 million in support from NSW taxpayers.

The musical was required to sell 18 per cent of tickets to out-of-state visitors - the Herald cannot reveal if this visitor target was achieved.

However, the Blue Man Group show missed its visitor target of 20,000, with just 4,947 tickets purchased by visitors not from Sydney.

The Corroboree Sydney festival also dramatically missed visitor targets in 2013 despite receiving $2.45 million over three years from the NSW government.

Some arts and cultural events received funding from DNSW despite lacking economic value based on the agency’s assessment.

The 2013 Sydney Festival scored just three out of 10 for its economic value, but scored eight on strategic criteria such as providing “the potential for good postcard shots” of Sydney.

In contrast, the New Years’ Eve Broadcast scored full marks on each of the criteria used by DNSW, which did not disclose how much funding it provided to the event.

The state government announced a $35 million cut to DNSW’s annual budget from $176 million to $141 million last month, prompting criticism from the tourism industry and the Labor opposition.

The number of visitors to NSW via the airport or seaport who declare they are here for a holiday has been declining since 2017.

But NSW tourism minister Stuart Ayres said the government’s marketing and events investment had led to a “strong reputation” for delivering events.

“This has been the cornerstone of our average 5.1 per cent year-on-year growth since the creation of Destination NSW.”

Kroos on captains: Ramos is the best possible option
This is the first time Jorginho has not scored a penalty for Chelsea. Allison hit the first 11-yard shot for Liverpool
Mane scored twice for Chelsea at Stamford bridge. Only Coutinho and McManaman were able to do this
Tiago made his debut for Liverpool, replacing Henderson in the match against Chelsea
The referee after VAR removed Christensen for a foul on the main. This is the first red Chelsea in the Premier League since 2018
Barca defender of Modibo Interesting Everton, and Wolverhampton, Leicester and Benfica
Semedu for 40 million euros will move from Barca to Wolverhampton (ESPN)
Source https://www.smh.com.au/national/nsw/value-for-money-public-funds-thrown-at-sydney-events-that-fail-visitor-targets-20190809-p52fny.html?ref=rss&utm_medium=rss&utm_source=rss_feed