Hundreds of thousands of Australians who import liquid nicotine from overseas have won a six-month reprieve from tough new rules that would have put them at risk of hefty fines, but the battle over vaping is far from over.

Australian Border Force was preparing to seize liquid nicotine imported without a GP prescription, after the Therapeutic Goods Association moved to close a loophole that allowed the product to be bought online from overseas and mixed with flavoured vape juice.

The tough new regime, under which offenders could be fined up to $200,000, was due to commence on July 1 - but federal Health Minister Greg Hunt last week gave into backbench pressure and ordered a six-month consultation and review. 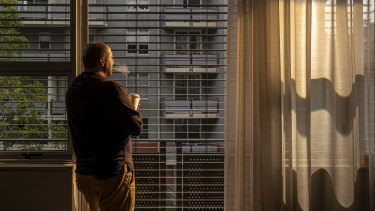 It was good news for Darlinghurst man Michael Boland, who wants to give up smoking and had begun to stockpile liquid nicotine in anticipation of the ban. "It seems a bit harsh that you're taking away an opportunity for people to quit," he said.

Now public health experts and vaping advocates are ramping up their long-running debate over the rightful place of liquid nicotine in Australia, with pro-vapers arguing for the product to be regulated as a consumer good rather than a medicine.

The Australian Institute of Health and Welfare's National Drug and Alcohol Survey 2016 shows 227,000 people use e-cigarettes in Australia, most of them containing nicotine. The 2019 survey, due to be published later this month, is expected to show a figure closer to 300,000.

Cancer Council chief executive Sanchia Aranda warns the long-term effects of vaping remain unknown and says caution must be exercised to ensure that vaping manufacturers are not free to create another generation of nicotine addicts.

She points to the United States, where nicotine vaping products have been "aggressively" marketed to teenagers, resulting in what has been described as an "epidemic" of vaping in high schools – resulting in thousands of cases of lung disease and scores of deaths.

"The company that owns [vaping product] Juul promoted them into schools in a way that has been condemned soundly in the US, and they're now trying to close the gates after the horse has already bolted," Professor Aranda says. 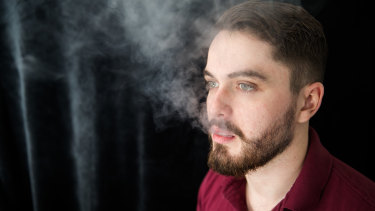 Callan Strickleton switched from smoking cigarettes to vaping and wants it to be legal. Credit:Edwina Pickles

Her partner Callan Strickleton, 23, smoked cigarettes for five years before switching to vaping last year. He wants liquid nicotine to be legalised so he can keep importing it from New Zealand.

"I tried to quit using patches with no luck," he says.

"You miss the social aspect, going outside, inhaling. The gum is not a replacement, it tastes foul and turns into BlueTac in your mouth."

Mr Strickleton says he has used vaping to gradually reduce his nicotine intake, saying it is more tolerable to do so "by increments" rather than switching between strengths of cigarettes, which are "like chalk and cheese".

Importing liquid nicotine into Australia is technically legal only with a GP prescription, but a lack of enforcement has meant that vapers and retailers have been able to buy it online indiscriminately.

Mr Hunt upset a group of 28 Coalition MPs when he announced the vaping crackdown at the end of a sitting week in late June, without taking the matter to be debated in the party room.

A spokesman for the minister said the timing of the announcement was designed to give suppliers and consumers "time to adjust while minimising stockpiling ahead of the changes."

The six-month review would "allow time to further streamline the process for patients obtaining prescriptions through their GP", the spokesman said.

Professor Aranda, whose position is in line with the CSIRO, the National Health and Medical Research Council, Lung Foundation, Heart Foundation and Public Health Association, says limiting access to smokers using vaping to quit with their GP's support is appropriate.

The problem for vapers like Strickleton is that very few GPs will issue the prescription.

Royal Australian College of General Practitioners President President Harry Nespolon says this is partly because liquid nicotine is "difficult to prescribe" without an authorised distributor in Australia, where no company has applied to have it approved by the TGA as a cessation aid.

The college supports the use of nicotine vaping to quit smoking, but only after traditional cessation aids, such as patches and gums, have been tried first.

Australian Tobacco Harm Reduction Association founder Colin Mendelsohn, a Conjoint Associate Professor at the University of NSW School of Public Health and Community Medicine, is one of just a handful of GPs across the nation who prescribe liquid nicotine.

Mendelsohn, who has in the past received funding from tobacco companies, says ex-smokers like Strickleton should not be blocked from accessing what he regards as a safer alternative to cigarettes.

"Low-concentration nicotine vaping products should be available for adult smokers who want to quit," he says. "It shouldn't be harder to get nicotine than cigarettes."

He says liquid nicotine should be regulated similarly to how it is in the United Kingdom, where vaping is legal but products have to be approved by the consumer regulator and meet safety standards, with health warnings and restrictions on advertising.

The TGA regulates nicotine under the Poisons Standard, with cessation aids such as patches and gums approved like medicines.

The vaping lobby argues that this is the wrong approach. "The TGA regulation process is totally unworkable," Mendelsohn says.

"The process is very onerous and expensive. Most vape products are made by small- to medium-sized companies. The only people who can afford to go down that path are tobacco companies."

Global tobacco giant Philip Morris International is the only company that has sought TGA approval for any vaping-style product. Last month, the regulator blocked PMI from selling its "heat-not-burn" tobacco product in Australia.

Professor Aranda says the argument that vape juice sellers are "just well-meaning people in the corner shop is wrong", pointing to links between Juul and PMI, whose parent company Altria Group owns a 35 per cent stake in the youth vaping company.

"Big Tobacco needs a new generation of Westerners to become addicted to their product," she says.

"That's how their business model works. But at the same time, they continue to promote a product we've known for 70 years is carcinogenic in low-income countries, which is their big market for combustible cigarettes."

Australian Medical Association vice-president Chris Zappala, a respiratory specialist, says nicotine "is a highly addictive substance" and that “Big Tobacco" is pushing the message that e-cigarettes and vaping are healthy alternatives "to normalise smoking among younger people".

Dr Zappala says health authorities "must not become complacent" in their efforts to further reduce smoking rates in Australia, after the success of the plain packaging laws enacted by the Gillard government and upheld by the World Trade Organisation.

The Commonwealth has spent nine years battling legal challenges to the laws, including domestic court disputes and an investment treaty claim by Philip Morris International.

Imported liquid nicotine products have been found to contain "higher levels of nicotine than advertised, as well as other adulterants that may pose a risk to users’ health", Zappala says, backing stricter rules to prevent non-smokers from taking them up.

Mendelsohn says tobacco companies control about 20 per cent of the e-cigarette market, but argues they are not "driving" the vaping trend – "they're trying to catch up."

Professor Aranda says traditional cigarettes "are not controlled by the TGA because they're an accident of history", although public health advocates would like to see them banned, along with vape shops.

"They've been available for sale long before we knew that they were lethal. So we don't want to make the same mistake again." 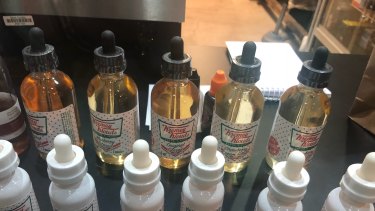 The way Mendelsohn sees it, nicotine vaping products are "designed for and almost exclusively marketed to existing smokers" and not targeted at the youth market.

But Professor Aranda says flavoured vape juices, many of which have been found to contain nicotine without disclosing the ingredient, are clearly marketed towards teenagers.

"You can vape your favourite Krispy Kreme doughnut flavour," she says, pointing to a range of vape juices being sold in South Australia, apparently making unauthorised use of the brand. "This is a big attraction to youth."

She says while pro-vapers could point to hand-picked studies showing that some smokers use e-cigarettes as a substitute "and stick to them", systematic reviews of studies across the US show vaping is associated with "subsequent and sustained use of cigarettes amongst youth".

"We know that 18- to 24-year-olds are the fastest-growing segment of e-cigarette users.

"Most of these kids are young people who've never smoked. We think around 14 per cent of them are vaping. That leads them into a lifetime addiction to nicotine."

She says reputable studies also show that while some people switch to vaping and become exclusive e-cigarette users, "many more people went on to be dual users – the idea of 'smoke where you can, vape where you can't'."

The Cancer Council "would like to see all the vape shops shut down", Professor Aranda says, as "we don't think they are safe consumer goods – even without the nicotine issue. We were never designed to put stuff into our lungs that we would normally eat."

Lille acquired 20-year-old forward David from Gent. He is the best sniper of the CONCACAF Cup
Rummenigge on Tiago's departure: If someone offers a fair amount for him, we will work
Juve can offer Arsenal for Lacazette Douglas Costa
Gasperini on Neymar: One of the world's strongest players. He will create problems for any opponent
Tuchel on crutches went to the Champions League match with Atalanta
Chelsea want to sign Ajax defender Tagliafico. He is seen as an alternative to Chilwell
Tottenham signed the midfielder Højbjerg and sold to Southampton Walker-Peters
Source https://www.theage.com.au/politics/federal/vaping-a-harmless-alternative-or-a-dangerous-gateway-to-smoking-20200702-p558e7.html?ref=rss&utm_medium=rss&utm_source=rss_feed