Victoria's failure to stop the spread of coronavirus has left NSW effectively isolated from the rest of the country and business leaders concerned the COVID-19 shutdown could jeopardise national food supplies.

Premier Gladys Berejiklian has been forced to introduce strict new controls to stop COVID-19 cases from crossing the border and has ordered that anyone returning to NSW from Victoria will now be forced into hotel quarantine for 14 days. 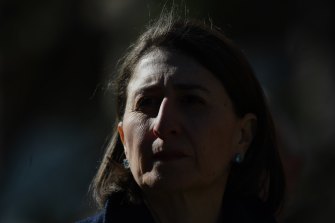 At the same time, Queensland announced it will close its borders to all of NSW and the ACT from Saturday. The border restrictions came as it emerged that Victoria had suffered its worst day of the pandemic with 725 new cases and 15 deaths.

A man in his 30s was among those who died, the youngest victim of coronavirus in Australia, while the number of active cases in Victoria has risen to 7227, including 1435 linked to aged care.

Business leaders are urging the Victorian government to make immediate changes to its tough COVID-19 lockdown rules to avoid jeopardising national food supplies amid confusion and fury at conflicting signals about who can keep working.

The strict new quarantine measures for those returning to NSW from Victoria came following advice from NSW Health officials that, although NSW's cases of coronavirus remained stable, the worsening situation in Victoria put the state at increased risk. 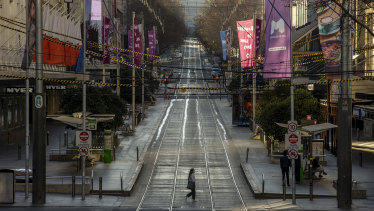 Business groups are furious about the extent of Victoria's lockdown restrictions.Credit:Wayne Taylor

"The steps that we had in place were based on what we understood was due to be happening in Victoria, that is a reduction in the number of cases," he said. "What we are seeing is a very substantial increase again today," NSW Health Minister Brad Hazzard said.

The Queensland border closure will mean residents returning to Queensland will have to fly in, with a "hard" road border to be put in place. All but a few vehicles, such as freight and those belonging to border residents, would not be allowed to enter.

"We've seen that Victoria is not getting better and we are not going to wait for NSW to get worse. We need to act," Queensland Premier Annastacia Palaszczuk said.

Industry groups were also holding a meeting late on Wednesday with the Victorian Treasurer after the Business Council of Australia expressed major concern about the the impact the coronavirus lockdowns in that state could have across the country.

"There are serious problems with current restrictions in Victoria and we stand ready to work with governments to keep Australians safe, save jobs and ensure people can access the products they need," BCA chief Jennifer Westacott said.

"We have to urgently fix supply chain issues at distribution centres. These restrictions must be lifted today because they do not recognise that supply chains operate nationwide."

NSW reported 12 new confirmed cases of COVID-19 in the 24 hours to 8pm on Tuesday.

On Wednesday afternoon, St Mary's Primary in Merrylands in Sydney's west confirmed it was closed for cleaning and contact tracing after a positive case attended the school. The case took NSW's daily tally to 13.

A teenage boy in the Hunter region was confirmed to have tested positive for COVID-19, and his school, St Pius X High School in Adamstown, has closed as a result.

Anyone who was on the Number 26 school bus from Hamilton to Adamstown at 8.20am on Monday, August 3, must now self-isolate for a fortnight.

Other members of the boy's soccer team, the Newcastle Jets under 15s and their opposition from last week, the Stanmore Hawks, are also required to self-isolate for two weeks.

"It is vital people in the community continue to present for testing if experiencing symptoms to limit the spread of the virus," Public Health Controller for the region's COVID-19 response team Dr Kat Taylor said.

Residents returning from Victoria will be forced into hotel quarantine from Friday. They must pay for their own accommodation and Sydney Airport will be the only entry point for anyone wanting to come into NSW.

"We are not an island, we are a state within a nation with geographic proximity to, unfortunately, other states," Ms Berejiklian said.

"We love our Victorian fellow citizens, but their rates of infection are incredibly high at the moment and not going down."

Mr Hazzard said the Victorian case numbers were "extremely disturbing" but stage-four restrictions in Melbourne should reduce the number of people entering NSW.

Residents of western and south-western Sydney have been urged to put off gatherings over the next few weeks and consider only going out once a week to stop the virus spreading.

"We’re pleading with them to basically think about, well, 'Can I just defer that gathering, or do I need to go to three hotels in one night? Could I limit it to one? Could I perhaps only go out once this week?' " Dr Chant said.

Ten of the new cases in NSW are linked to existing clusters: two to the Thai Rock restaurant at Wetherill Park, two to The Apollo restaurant at Potts Point, and six with the Bankstown funerals cluster.

One case is a returned traveller in hotel quarantine and one case was locally acquired with no known source.

A childcare centre in Sydney's west was closed for cleaning on Wednesday after a child attended while infectious. The child attended the Kids Early Learning Academy on July 29.

NSW residents will face the same quarantine costs as returning international travellers: $3000 for an adult, $1000 for each additional adult and $500 for each child aged three and over.

It's time to learn the names of new Borussia heroes. Now there are 17-year-old boys making goals
Paulo Fonseca: it's Important to bring Smalling back to Roma. We have only 3 Central defenders
Arteta about 2:1 with West ham: Arsenal made life difficult for themselves with losses, but they fought and believed in victory
Palace midfielder Townsend: Could have beaten Manchester United with a bigger difference. We had moments
Philippe Coutinho: I am motivated and I want to work hard to make everything work out well on the pitch
Torres on Chelsea: I Thought I could remain a top player, but I was unstable. Although there were enough successes
Neville on the broken penalty against Manchester United: an Absolute disgrace
Source https://www.smh.com.au/politics/nsw/victoria-s-failure-to-stop-coronavirus-spread-isolates-nsw-could-jeapodise-food-supply-20200805-p55iwp.html?ref=rss&utm_medium=rss&utm_source=rss_feed