Mr English died peacefully surrounded by his family at his daughter Marita Scott’s home on a sunny, spring day last year. Mr Bareuther, however, took his own life after being ruled ineligible to access medication under Victoria's assisted dying laws. 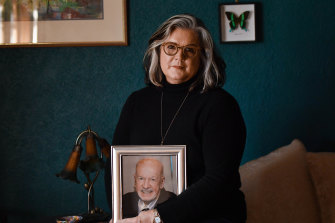 A year to the day after the laws were introduced, the two men's cases show how vastly different people's experience of and access to euthanasia has been.

On the morning of Mr English's death, he read aloud letters he had written to each of his five children, nine grandchildren and his wife. The 96-year-old, who was in the final stages of terminal bowel cancer, went outside in his wheelchair to feel the sunshine on his face for the last time.

He died hours later after ingesting a cocktail of lethal drugs as Amazing Grace hummed softly in the background.

"The last thing I said to him was 'dad you go with so much love',” Ms Scott said. "Dad replied 'and I don’t want anything else'.”

Mr Bareuther, meanwhile, left a note politely asking those who discovered his body not to waste any of their time “on any silly theories of foul play” before taking his own life alone in his shared public housing block in St Kilda.

He wrote letters to two of his neighbours, thanking them for being good friends. They were pushed under the door of one of the nearby units.

The 68-year-old, had been dying of inoperable pancreatic cancer, but was denied access to the state’s assisted dying laws.

His lonely death in September last year was described as a “very sad tale” by a Victorian coroner this week. 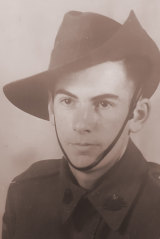 Keith English as an 18-year-old soldier

The laws allow access to a lethal substance for terminally-ill adults who have only about six months to live, or no longer than 12 months for those with a neurodegenerative diagnosis, and who meet other strict eligibility criteria such as being able to give informed consent.

On the first anniversary of the introduction of voluntary assisted dying, doctors say while some terminally-ill Victorians are dying swift, peaceful deaths under the laws, others are being blocked due to red tape, or dying after being unable to find a doctor willing to help them.

Figures obtained by The Age show more than 300 applications have been lodged by terminally ill Victorians since the state's landmark euthanasia laws came into force last year.

While it remains unclear how many of those applications have been successful, the figure is more than double the 135 people who applied for permits and were deemed eligible between June 19 and December last year.

Mr Bareuther was deemed ineligible for the voluntary assisted dying laws because, despite having lived in Australia for about 40 years after moving from the UK,he never became a citizen or permanent resident - a key eligibility requirement. 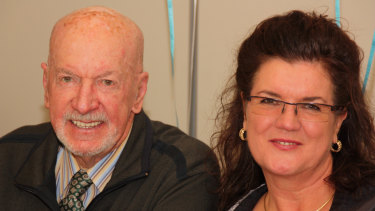 Coroner Phillip Byrne was moved by the case and has asked whether it was possible to introduce “some level of discretion” in the assessment process.

“Although one can understand the rationale behind the denial of the [voluntary assisted dying] process to Mr Bareuther, I must say I have found it difficult not to feel sympathy for [his] plight,” he said, in findings handed down this week.

The coroner stopped short of issuing a formal recommendation.

"If there was one thing I could change immediately about the laws, it would be getting rid of the clause which says you have to be an Australian citizen," he said. "Many people have lived in Australia for decades after moving here as migrants, they call Australia home. But they're being denied access because they don't have a piece of paper."

Health Minister Jenny Mikakos said she was “deeply saddened” to learn of the circumstances of Mr Bareuther’s death, and had sympathy for the situation.

However, she added that the state’s euthanasia scheme was “the safest and most conservative model in the world and was developed after lengthy consultation and consideration to give people suffering with an incurable illness at the end of their lives another compassionate choice’”.

St Kilda GP Nick Carr has assisted 15 people with applications to access euthanasia. Most died with the lethal medication in hand, but without having used it.

“By the time they come to someone like myself, they’ve come to terms with the fact that they are going to die,” said Dr Carr, who sits on the board of Dying With Dignity Victoria.

Mr Bareuther was Dr Carr’s first patient to approach him about applying for the euthanasia drug.

He said like many terminally-ill patients he had seen, Mr Bareuther had been hugely relieved when he told him he could help coordinate his euthanasia application, and devastated when it emerged that he was not eligible.

“He was an Australian in every sense but a technical one, a previous taxpayer, a current Centrelink recipient and on the electoral roll,” Dr Carr wrote in his submission to the coroner.

“I personally was immensely distressed when I heard that Julian had killed himself. Here was a lonely man, dying of a horrible cancer, who sought my legitimate help.”

Among the many successful applications he’s been involved in, Dr Carr has also seen upsetting cases where it has taken people too long to fulfil documentation requirements, or they have been unable to get a second doctor to assess them, amid an ongoing shortage of medical practitioners willing to be involved.

He recalled a case of a prostate cancer patient in terrible pain who did not want to die alone, but encountered a series of hold-ups with his application, including finding a doctor to give a consulting opinion.

“He actually did die alone, exactly as he didn’t want to.”

"There has been a relatively low number of doctors, particularly specialists, who have undertaken the mandatory training," Ms Paul said. "This has obvious ramifications for patients seeking a doctor who is qualified to guide them through the process. This reflects experience overseas where take-up of similar laws in their early years was small."

She urged the state government to embark on a education campaign, targeted at the medical community, outlining their rights and responsibilities in relation to assisted dying.

The Voluntary Assisted Dying Review Board, which assesses every application, will release its next report in July, which will reveal the number of people who have taken their own life using the laws in the first year.

Lampard on 3-0 with Watford: a dry Win at home, three goals scored-Chelsea played very well
Pulisic on 3-0 with Watford: Chelsea needed this win. We are confident that we can get into the top 4
Rebic scored 9 goals for Milan in 11 Serie A matches
Mikel Arteta: getting Arsenal into the Champions League seemed impossible a few weeks ago
Бав Bayern won the gold double in Germany for the 13th time
Neuer provided an assist in the German Cup final with Bayer
Sarri about 4:1 with Torino: Juve had a false sense of security after a couple of goals
Source https://www.smh.com.au/national/victoria-s-first-year-of-euthanasia-sees-lives-end-in-peace-and-devastation-20200618-p553yu.html?ref=rss&utm_medium=rss&utm_source=rss_national

'Turn the news off': Legend's advice for Broncos as club backs Seibold