Victoria’s peak building industry group has escaped criminal and civil penalties after a federal investigation found the state's Master Builders Association had been led for four years by people who were not legally entitled to their positions.

The 6000-member organisation, which reported revenue of more than $24 million last year, escaped fines from the federal government’s Registered Organisations Commission (ROC) on a technicality and has promised to do better for its members. 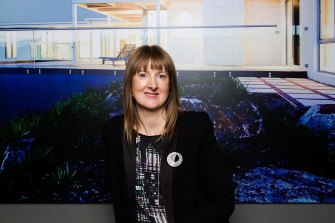 The Australian Federal Police, called in by the commission to investigate allegations of criminal behaviour at the association, did not pursue a former executive accused of covering up the electoral irregularities, citing a lack of evidence.

In a rare investigation into an employer organisation by the commission, which targets the vast majority of its probes at trade unions, it found serious irregularities with the Master Builders’ board elections in 2016 and 2018.

The operation, sparked by a whistleblower’s allegations of a cover-up, found the association's president, Richard Hansen, and his predecessor Melanie Fasham were both ineligible to hold the prestigious position when they were elected by a vote of its 15-member council in 2018 and 2016 respectively.

Accusations that the MBA’s former general manager, Leanne Edwards, covered up her bosses’ ineligibility for their jobs were referred by the commission to the AFP, which confirmed on Thursday that they would not be pursuing charges because of a lack of evidence.

The Master Builders had a legal exemption allowing it, and not the Victorian Electoral Commission, to hold its own elections and preventing the ROC from imposing fines for irregularities in ballots held under the exemption.

But under the weight of the investigation, the association agreed in April to surrender the exemptionm, and its upcoming elections and all subsequent votes will be conducted by the VEC.

The association's chief executive, Rebecca Casson, said she had ordered a thorough review of the organisation’s governance procedures and that both the group’s rules and its constitution were being updated in line with recommendations from the ROC.

"Master Builders Victoria is committed to implementing any further changes to its processes and procedures to ensure the best possible outcomes for our members and the organisation," Ms Casson said.

The Registered Organisations Commission told The Age that Mr Hansen and Ms Fasham had been elected to their positions unopposed and that Ms Edwards had been referred to police because the commission does not investigate alleged criminal conduct.

"The evidence indicated that in each case the ineligible candidates were apparently elected unopposed, and in the absence of any eligible nominees," a ROC spokesperson said.

"The conduct of one individual, which may have contravened criminal offence provisions in the Fair Work Act 2009, were referred by the Commissioner to the Australian Federal Police."

An AFP spokesman confirmed the force had not found enough evidence to pursue an investigation into Ms Edwards' conduct.

Spartak is going to withdraw from the RPL because of the refereeing – your reaction?
There are 2 cases of coronavirus in Atletico. The match with Leipzig – August 13
Renzo Ulivieri: Pirlo is one of the most profound thinkers of world football. He knows more than most coaches
Pirlo wants to sign Tonali at Juve. Alternative – Locatelli
Before the match with Real Madrid, sterling watched a video of the defeat by Tottenham in the 2018/19 Champions League
Andrea Pirlo: I am Flattered to have received such respect and trust from Juventus
Former Manchester United midfielder angel Gomez has moved to Lille. He will spend the season on loan in Boavista
Source https://www.theage.com.au/national/victoria/victoria-s-master-builders-association-escapes-penalties-over-election-scandal-20200702-p558hf.html?ref=rss&utm_medium=rss&utm_source=rss_national