By Ellen Milligan and Christopher Jasper

Richard Branson's Virgin Atlantic Airways told a London court that it will run out of cash next month unless it secures approval for a £1.2 billion ($2.2 billion) rescue package announced in July.

Without the funds, available cash will drop to about 49 million pounds by late September, below the 75 million pounds specified in bondholder contracts, Virgin told a judge on Tuesday (UK time). That would require the sale of Heathrow airport slots against which the bonds are secured, forcing the carrier to fold. 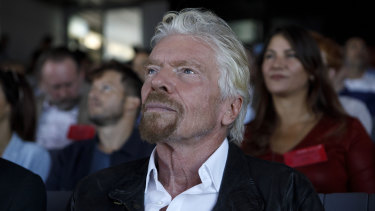 Richard Branson's airline would be forced to fold next month unless the deal was approved, a London court has heard.Credit:Bloomberg

Virgin Atlantic said it obtained an order from the court to convene four creditor meetings on August 25 to vote on the restructuring as part of a process that will bind all debt classes to the rescue plan. The carrier said that creditors in three of the groups have agreed in advance to back it.

"With support already secured from the majority of stakeholders, it's expected that the restructuring plan and recapitalisation will come into effect in September," a spokeswoman said. "We remain confident in the plan."

The restructuring must be approved at a hearing scheduled for September 2, after the creditor meetings, or will be placed into administration mid-month with any assets sold, David Allison, a lawyer for the company, told the court.

Virgin Atlantic unveiled the rescue plan on July 14 after the coronavirus crisis shut down flights and the carrier was told that its credit ratings disqualified it from support through a state-backed loans program.

Under the proposals, US hedge fund Davidson Kempner Capital Management will provide about £170 million in secured financing, while Branson himself will contribute £200 million after raising money from space venture Virgin Galactic. 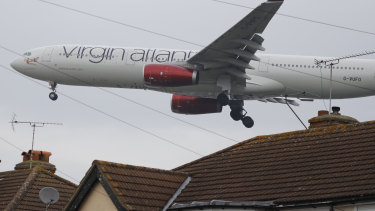 Virgin Atlantic unveiled the rescue plan on July 14 after the coronavirus crisis shut down flights and the carrier was told that its credit ratings disqualified it from support through a state-backed loans program.Credit:AP

Virgin's proposals for the creditor groups include a fully drawn $US280 million ($391 million) revolving credit facility secured against aircraft and engines will become a term loan with a longer maturity and a margin that's 1 per cent higher. One engine will be freed up to be used as security for a new $US30 million facility.

Plane-leasing firms that own 24 Virgin jets will be offered three options: a 15 per cent cut in fees until September next year at least, an 80 per cent reduction for the full term, or the termination of leases and the return of aircraft in their current condition.

So-called connected creditors including 49 per cent shareholder Delta will get preference shares in return for capitalisation of money owed. Trade creditors will take a 20 per cent haircut, with 10 per cent of the remaining balance paid in cash and the rest in quarterly sums through September 2022. Suppliers of goods and services critical to Virgin, such as airports, will be exempt from the proposals.

Frank de Boer will lead the Netherlands national team. Contract - for 2 years
Dynamo Stavropol about the match with Rotor: Transfers in the Russian Cup are prohibited. The RFU said that there is no way back
Maccabi entered the Champions League without 11 players due to covid. UEFA allows you to play if there are 13 players from the application
Ole Gunnar Solskjaer: De Gea saved us for years, Henderson did the same today. Lingard played well
The semed said goodbye to Barcelona: Thank you for the opportunity to realize the dream. Eternally grateful
Juve have leased Morata from Atletico for 10 million euros with the right to buy out for 45 million
Barcelona and Atletico have agreed a move for Suarez (Fabrizio Romano)
Source https://www.theage.com.au/business/companies/virgin-atlantic-warns-it-is-running-out-of-cash-as-it-seeks-rescue-deal-approval-20200805-p55ilf.html?ref=rss&utm_medium=rss&utm_source=rss_business

From the Archives, 1977: The first VFL Grand Final broadcast live in Melbourne

Government staffer escorted to Parliament House where she has been storing former MPs hard drive: ICAC

Government staffer escorted to Parliament House where she has been storing former MP's hard drive: ICAC

‘If you think something is important, you have to have a go’

'I do not know who made the decision': Police Minister also in the dark about hotel security

Four kids and a lack of sincerity

Ministers Pakula and Neville say Health Department, not their own, was in charge of hotels

Man arrested in Bathurst over alleged overseas importation of firearms

Bolsonaro tells the world: Brazil is victim of 'brutal misinformation'

The end of an error: Brisbane's hellish season and the mountain ahead

'The price was not in the brief': Minister ignorant of $30m paid for airport land

Brave Ducklings Take Leap of Faith Out of Pond in Bendigo, Victoria

LNP has Environmental Defenders Office in its sights

NBN bonuses to executives to be decided by board: Paul Fletcher

When ballet hit the streets: the stories behind stunning tour photos

US Homeland Security and NSW authorities at a home in Bathurst

Wallaby bomb as Qantas flies away

Andrews open to doing a deal on arbitrary detention laws

Facebook takes down fake pages created in China aimed at US, Philippine politics

KFC SuperCoach NRL: Who will win the $50K?

‘Not before time’: PM’s swipe at Premier

More restrictions to be eased as cases plummet

Can luxury fashion ever regain its lustre?

Falling cases to accelerate Melbourne's road back from restrictions

Name ‘as jarring as the C-word’ dropped

Later NBA season may rule stars out of Tokyo Olympics

‘Mega backflip’ that will cost billions

Naked City podcast: The death of a neo-Nazi crime boss

Next generation charging: why you'll want a GaN power brick

Virus ‘under control’ in Qld as ADF leave

How 2000 Olympics changed how we live

Kathmandu hopes for recovery after COVID hits its sales

'There's a kid out there': Locals puzzled as police bar them from hunt

'We've got the votes': Republicans push to fill Ginsburg vacancy before election

Eddie’s excuse as good as it gets

ASX bounces back after overnight tech rally; All sectors ahead

'I hope you like it': Woman suspected of sending ricin to Trump to appear in court

The $300 pay cut for JobSeekers

Zempilas warned over unauthorised use of media platforms for electioneering

Rebooting your romance is more important than you think, especially now

As it happened: Bulgarians bounced as Aussies set up golden chance