Virgin Australia will sack 3000 employees, or around a third of its workforce, and offload its long-haul international jets as part of a re-launch under its new owner Bain Capital.

Australia's number two airline, which went into voluntary administration in April owing $6.8 billion, released its relaunch plan on Wednesday morning. The moves were designed to make it a "stronger, more profitable and competitive" carrier, it said in a statement. 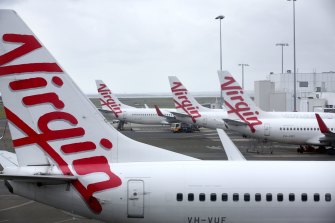 Virgin said it will strip its fleet of 132 aircraft back to just its Boeing 737s, of which it has 79, and its regional and charter Fokker 100s and Airbus A320s. It will offload its long-haul Boeing 777s and Airbus A330s, Tigerair A320 and ATR turboprops.

Virgin's budget Tigerair brand will be retired but Virgin will maintain its air operating certificate to give it the option of relaunching a new ultra-low cost arm in the future.

While long-haul international flying was an "important part" of the airline's future, such routes would remain suspended until global travel demand recovers from the COVID-19 pandemic, Virgin said.

Virgin's administrator Deloitte signed a deal to sell the airline to US private equity giant Bain in June, but key terms of the deal have been kept secret, including how large the business will be and how much will be paid to unsecured creditors.

Kimmich is recognized as the best defender of the 2019/20 Champions League
UEFA posted a photo of Messi and Ronaldo: together again
Liverpool will play against Atalanta Miranchuk and Ajax in group D of the Champions League
Neuer is recognized as the best goalkeeper of the 2019/20 Champions League
Drogba received a presidential award UEFA
Calvert-Lewin, Saka and Barnes are called up to the England team for the first time. Maguire returned to the squad
Lazio leases Pereira from Manchester United with a buy-out option for 27 million euros. Potentially the biggest transfer in the history of Rome
Source https://www.smh.com.au/business/companies/virgin-australia-to-axe-3000-jobs-sell-long-haul-jets-in-relaunch-20200805-p55imp.html?ref=rss&utm_medium=rss&utm_source=rss_feed

McGowan 'very unhappy' with protocol breach, but full of praise for Pilbara personnel

Anything is possible: Papalii's magic moment commemorated in polyester

Eye of the Storm: Lee realises potential at Melbourne