Health Minister Roger Cook has called for tighter protocols and rules around foreign ships coming into Australian waters, after an infected ship arrived off the Pilbara coast in Western Australia.

WA needs to better understand how international testing regimes work, as another outbreak on board a foreign ship could potentially threaten the import and export trade, he warned. 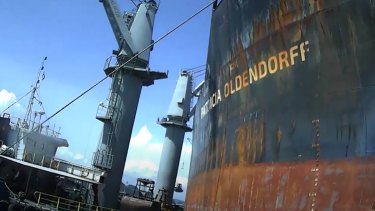 The Pilbara, where the iron ore bulk carrier Patricia Oldendorff had arrived, was “literally the engine room of our economy”, highlighting one of Australia’s COVID-19 risk factors, and it was important the state government and community could have confidence in the arrangements in place.

Mr Cook said he could not allow these sorts of scenarios to occur without challenging the rules that allowed them to come about.

The ship has been brought in closer to land to be within range of the 4G network so remote health services can be provided to those still on board.

But the state government’s preference was to get all the crew off the ship in order to give it a deep clean.

Crew members who finished their quarantine periods in a Port Hedland hotel will be able to be part of the clean crew who can then go back onto the ship, which needs 13 working crew to sail.

“This is a very tricky situation,” Mr Cook said.

“We’re anticipating that this scenario will resolve itself within the fortnight.”

He said it was not yet known how the crew became infected with COVID-19 and he was confident that current arrangements would keep the Pilbara community safe.

The Australian Defence Force is sending troops to Port Hedland to help manage the situation.

“We should look upon this operation as a success,” Mr Cook said.

Pirlo about 0:2 with Barca: this match will help Juventus grow
Griezmann did not make any effective actions in 6 matches under Koeman
Ole Gunnar Solskjaer: Leipzig made Manchester United work hard. Rashford had a big impact on the game
Roberto victory over Juventus: the Best response to the unrest in Barcelona - it's a game
Ronald Koeman: Barcelona played their best match of the season against Juventus. We had a lot of chances
Messi scored 70 goals in the Champions League group stage. This is a record
All 4 of Messi's goals this season are scored from penalties. Three for Barcelona, one for Argentina
Source https://www.theage.com.au/national/western-australia/wa-health-minister-calls-for-tighter-rules-around-foreign-ships-after-covid-19-cases-sail-to-pilbara-20200929-p560dg.html?ref=rss&utm_medium=rss&utm_source=rss_national

Our Pick: a twisted take on Southern noir

'I love desperate people': Call Me By Your Name director takes on TV

'Who the hell elected you?': US Senate tech hearing becomes political tussle