Western Australia will undergo a litmus test over how well it has managed the virus spread – and if it could host an AFL grand final – by allowing 28,000 football fans back into Optus Stadium this week.

And while phase 4 restrictions remained in place, which required people to distance themselves from one another and have prevented the stadium from opening up to its full 60,000-seat capacity, the games would still be a measure of how well big events could be run while maintaining the safety of patrons, workers and public transport staff. 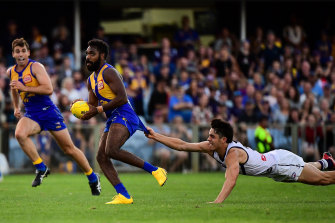 AFL at Optus Stadium this week will be a litmus test for how well WA has managed to contain the spread of coronavirus. Credit:Getty Images

Optus Stadium chief executive Mike McKenna said the re-opening had come as a relief, as a small number of the stadium’s permanent staff had to be made redundant when it closed its doors in February.

"It's been a tough time for the stadium, the vast majority of our staff have been casual and haven't had any work since February,” he said.

"We were able to secure JobKeeper payments for over 600 of our staff but not all of them were eligible, so the most important thing is that they're back to work now and we're going to roster them as often as we can, which is going to be a fairly heavy workload with the number of AFL games scheduled here over the next few weeks."

Tickets for Thursday's Geelong-Collingwood clash will go on sale at 9am on Tuesday, while Docker members and VIPs who manage to draw a Western Derby ticket from the ballot will fill every second stand and some of the corporate areas on Sunday.

Transport Minister Rita Saffioti and Mr McKenna have called on fans to plan their trip early and target the best entry point out of the available 95 turnstyles to avoid bottlenecks at the start and end of the games.

“If you’re bringing a bag or bringing food or drinks make sure you are travelling light and that you're prepared for security searches,” Mr McKenna said.

“We want to make sure that we speed up the trends of people coming through the gates into the stadium so they can be seated on time and not delay people in queues.”

People can expect to see hundreds of hand sanitiser dispensers distributed around the stadium and only contactless payments accepted at the 51 food and beverage stands.

Mr McKenna said those with cash could convert it to a card at cash exchange points in the stadium.

He said while the cleaning schedule would be more rigorous around shared facilities like bathrooms and doors, he remained confident the risk was minimal.

"Up until now the risk has not been from fans; it's been from players coming from interstate so we would make sure those areas are clean for the teams as they change over and keep them as safe as possible,” he said.

None of the 1400 stadium staff will wear masks, unless they choose to.

Ms Saffioti has committed more rail and bus services to and from the games, and while social distancing on board was not considered mandatory, she said there would be load monitoring at the end of matches to make sure fans didn't flood transport services all at once.

“Although the match will be capped under phase 4 of our roadmap, we will be providing extra services at the games to ensure we have sufficient capacity on our trains and buses,” she said.

“However we expect it may take longer to clear the stadium so we ask all football fans to be patient.”

"We're much better off having the Melbourne situation under control and borders open and the grand final in Melbourne because it means we can do business right across the country and I'm sure our industry here in WA would much prefer it," he said.

“However, if the situation arose where the AFL and the government of Victoria thought that they couldn't host the game we would certainly be putting our hand up to be at the forefront of any stadium around Australia to host this game.”

Coach Of Brentford: We went from a mid-level team to the third team of the season. This is an incredible achievement
Burnley are not going to sell Tarkowski for less than 50 million pounds
Lester wants to rent Trincou at Barca with the obligation of ransom for 50 million pounds
Scott Parker: Fulham have a lot to progress. And I am happy about it
Manchester United are threatening to pull out of negotiations for Sancho if Borussia do not reduce the price from 120 million euros
Cesc about Casillas: You are a mirror to look into
Lone mascots are another symbol of the year
Source https://www.smh.com.au/national/western-australia/wa-to-test-its-defensive-boundaries-as-afl-returns-to-play-at-optus-stadium-20200713-p55bn1.html?ref=rss&utm_medium=rss&utm_source=rss_national