A 29-year-old woman who arrived in Western Australia from Victoria last month did not follow directions to self-quarantine and instead attended a birthday party and socialised with a number of elderly people, police say.

On arrival at the airport the woman was issued with a self-quarantine direction as per border rules, requiring her to isolate within her home for 14 days. 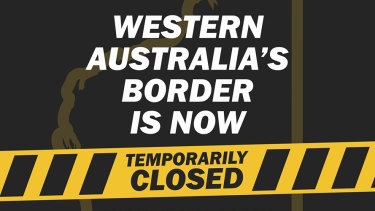 WA's border has been closed since April 5, with no plans to reopen any time soon. Credit:WA Government

The woman, from Eaton, has been charged with one count of Failed to comply with a direction.

News of the quarantine breach comes as 29 people fight for their lives in Victorian intensive care units amid a serious spike in COVID-19 cases.

WA has not had a case of community transmission in more than three months.

WA recorded two new cases of COVID-19 on Thursday, bringing the state’s total to 646.
Both were returning travellers who were in hotel quarantine.

There are now 27 active cases of coronavirus in the state, 19 from WA and eight from interstate.

All of the cases are overseas travellers and were detected during the mandatory 14-day hotel quarantine period.

Eleven are from the same flight which flew in from Dubai on July 1.

Since WA introduced mandatory testing for Victorians entering the state, COVID-19 testing rates have doubled to around 700 tests a day.

Victorians are now required to be swabbed for the virus when they arrive at Perth Airport, and again on day 11 of their self-isolation.

The Eaton woman entered the state on June 30, and it will be alleged that on July 11, she attended a birthday party and socialised with a number of people, many of whom were elderly.

Police became aware of the alleged quarantine breach and the woman was subsequently charged.

Ødegård prematurely returned to the real world of rental Sociedade
Arsenal and Roma are discussing the exchange of Torreira for diavar
The trained bear was brought to the dressing room of the Sakhalin Resident
De Ligt had shoulder surgery and will miss 3 months
Modibo – infected with coronavirus Barcelona player. The disease passes without symptoms
Lichtsteiner finished his career. The former Juve and Arsenal defender is 36 years old
Matuidi left Juventus. The midfielder will move to Inter Miami Beckham
Source https://www.smh.com.au/national/western-australia/wa-woman-charged-after-flying-in-from-victoria-breaching-quarantine-to-attend-party-20200716-p55ct9.html?ref=rss&utm_medium=rss&utm_source=rss_national