The man charged with preparing the Wallabies' scrum for the might of the All Blacks has been forced to resort to video conference calls from the UK.

Australian rugby fans may not know much about Petrus du Plessis but he is the highly regarded scrum doctor that coach Dave Rennie handpicked from their time together at Glasgow Warriors. 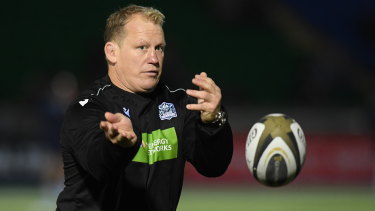 Petrus du Plessis will join the Wallabies in Australia next month.Credit:Ross Parker

The South African arrived at Glasgow in 2018, 12 months after Rennie had taken control of the Warriors following his back-to-back Super Rugby premierships as coach of the Chiefs.

Within 12 months, Rennie made du Plessis a player coach.

He took charge of Glasgow's scrum and when Rennie won the race for the Wallabies job, he was so impressed with du Plessis' work he put the former prop high on his wish list.

After some negotiating with Rugby Australia, Rennie landed his man. But a shortage of flights during the COVID-19 pandemic have blocked the 39-year-old's move to Australia.

He is currently stuck in the UK and has been forced to conduct his coaching sessions via Zoom.

"A lot of our forwards stuff, Geoff has been taking. We have a lot of experience forwards in our forward pack," back-rower Pete Samu said. "Not having our [scrum] coach here, those boys have been stepping up and taking charge."

The Wallabies are hopeful du Plessis will join the group upon their return to Australia after two Bledisloe Cup Tests in New Zealand.

Before du Plessis arrives, Samu has a point to prove.

The 28-year-old was the subject of a tug of war between New Zealand Rugby and Rugby Australia when he was an integral part of the Crusaders' title winning machine but after playing nine Tests in 2018, former coach Michael Cheika left him out of his Rugby World Cup squad altogether.

He has not pulled on the gold jersey since the Wallabies were beaten 37-18 by England at Twickenham in 2018.

Why he was left out of Cheika's plans for last year's World Cup remains a mystery to Samu, too. 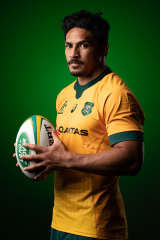 "Not so much feedback last year," Samu said. "I know what I have to work on and it’s just been working on little things, as well. Lineouts, scrums, I’ve been working on my set piece in the background.

"It was very frustrating. Just not knowing. But that’s in the past now. We’re looking forward to the first Test and pulling that gold jersey on again."

Cheika's departure – and Samu's strong form for the Brumbies – has the Randwick product primed to make his return to the Test arena.

He won two titles at the Crusaders and played an integral part in the Brumbies' run to the top Super Rugby AU prize.

Rennie may be hoping Samu's inclusion will see the Wallabies break the Bledisloe Cup drought which has now hit the 18 year mark.

"I actually thought about that the other week, after the Super Rugby AU final," Samu said when asked why success seems to follow him around.

"I don’t know if it’s as easy as it sounds. I think the main thing is enjoying my footy. Whether that’s a win or a loss, I’ve still been enjoying myself and loving my time at the Brumbies.

"I didn’t play as much Test footy as I wanted but being back in the squad, I’m pretty keen to start playing again and push for a starting spot."

Ronald Koeman: Van Dijk is one of the best defenders in the world, but he was lazy, he had to work on his character
New version of the Champions League reform: the number of teams will be increased to 36, and there may be no groups at all
Di Maria didn't want to go to Manchester United, but he moved for a fat contract - and didn't fall into van Gaal's philosophy at all. The coach and the robbery broke it
UEFA will reduce payments to clubs in the Champions League and Europa League for 5 years due to losses from the pandemic
Cherchesov's son had a successful operation after breaking his jaw. Recovery period - 4 weeks
Alberto Zaccheroni: Ibrahimovic had a greater impact on Italian football than Cristiano Ronaldo
Lucien Favre: Borussia can't rely too much on Holand. He played all the matches for the national team
Source https://www.theage.com.au/sport/rugby-union/wallabies-new-scrum-coach-stuck-in-uk-as-samu-eyes-overdue-return-to-test-arena-20200929-p560bc.html?ref=rss&utm_medium=rss&utm_source=rss_feed