NSW Police Minister David Elliott has issued a warning to the state's hospitality industry to abide by the public health orders or risk having tougher restrictions imposed.

Mr Elliott said the industry could not afford to have any more "slips" following the outbreak at the Crossroads Hotel in Casula, and the breach of social distancing requirements at the Golden Sheaf in Double Bay, which was fined $5500 last week. 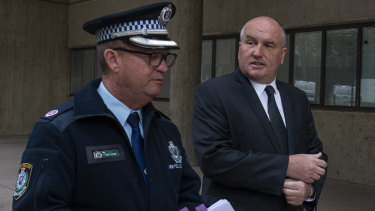 "We don't want to see the hospitality industry close down again and go into lock down again, because it may not survive."

NSW Police also confirmed on Monday that they had issued a 72-hour shutdown order for a Jindabyne pub in the Snowy Mountains on Saturday after it had been given three formal warnings since May over intoxication levels and public health and safety issues.

The pub, which has since been identified as the Lake Jindabyne Hotel's bistro, was closed for breaching the Liquor Act, but police flagged that further infringement action was likely. The hotel declined to comment.

"If we have to close hotels and clubs again, the patrons will have to take some ownership of that," Mr Elliott said.

"I want people to take responsibility for their actions."

While there are no fixed patron limits, the plan requires venues to ensure that capacity does not exceed one customer per four square metres of space, and there must be no more than 20 customers at a table.

Venues are also required to keep the name and mobile number or email address for all customers, staff, and contractors for a period of at least 28 days.

Mr Elliott said he had had discussions with the Australian Hotels Association and ClubsNSW and was expecting the industry to take further action to comply with safety measures.

Acting Police Commissioner Tony Cooke said claims that some patrons of the Crossroads Hotel had not had their details recorded by the pub were “concerning” and would form part of the investigation into whether the venue had breached the rules.

The Eastern Suburbs Rugby Club in Bellevue Hill is also under investigation after social distancing concerns were raised at a trial rugby match on Saturday.

“The time for warnings has passed,” Acting Commissioner Cooke said.

“Complacency is the ally of the virus. We need to take this seriously.”

Lewandowski on Chelsea: They are playing very well, but we are Bayern
Juventus wanted to sign defender Akieme, but Barcelona refused
Lazio has agreed with Mayoral and will offer real 15 million euros
In Romania, a special champion: everything was decided in the match, the format of which was chosen 3 hours before the whistle
Danny rose: I was stopped by the police last week: is This a stolen car? Where did you get it?. And this happens regularly
Barcelona refused to sell for 60 million euros Trinca u, bought from Braga for 31 million. The club count on him
Chelsea will compete with Everton for Regilon. Real Madrid is ready to sell him
Source https://www.smh.com.au/politics/nsw/we-don-t-want-another-shutdown-police-minister-warns-pubs-and-patrons-20200713-p55bmy.html?ref=rss&utm_medium=rss&utm_source=rss_feed