If Lycett is medically cleared this week to play, West Coast will more than likely continue with two specialist rucks to confront the irrepressible Gawn.

But it has been evident approaching a fourth successive finals campaign, and after losing Naitanui, that Eagles management has rehearsed using a “pinch-hitting” ruck support, with Ah Chee spending more time in match practice drills.

Ah Chee, 24, also spent short bursts on the ball with WAFL alignment unit East Perth late in the season after his eight outings in his first season with the Eagles since crossing from Port Adelaide over summer.

West Coast assistant coach Jaymie Graham did not completely rule out using just one specialist ruck against the dangerous Demons midfield led by the influential Gawn.

Melbourne leads the league in clearances from centre ball-ups and sits second in clearing the ball from stoppages across the ground. 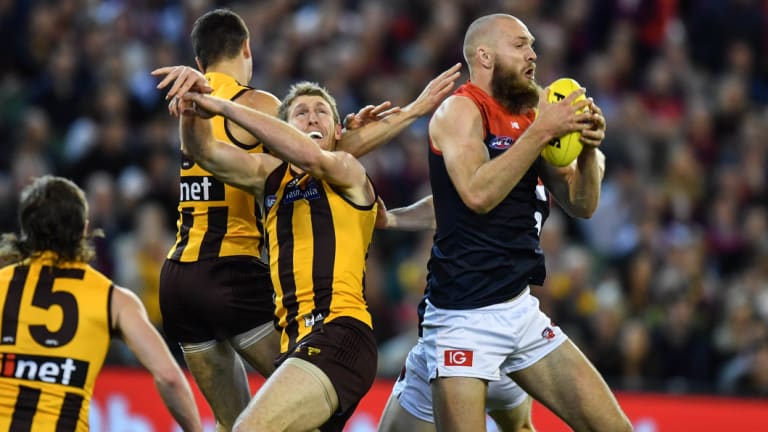 Demons ruckman Max Gawn has led his club's charge to the finals in season 2018.

“Obviously we’ve got a bit to work through this week,” Graham told Radio 6PR.

“The rucks are going to play a really important role again.”

Graham conceded the retention of Vardy and Lycett for ruck duties and occasional stints forward will be discussed with coach Adam Simpson and Eagles support staff.

“We still haven’t had any sort of match committee around who’s going to play.

“They’re discussions that we’ll have.

“We have tried a few boys in second roles. You’re right, there’s a possibility.

“But one thing we have done this year, is we have played two ruckman and it has worked pretty well for us.”

West Coast rank 14th in clearances from the centre through their 23-match run to finish second with 16 wins across 2018.

Lycett continues to be linked with a move to Port Adelaide as a restricted free agent when his finals duties are over this month and has managed to put together a complete campaign as one of only six Eagles to make play every game this season.

He made only one appearance last year - in the round 16, six-goal home loss to Port - after battling a serious shoulder complaint.

Vardy, 27, has made eight appearances this season, chiming in with around 16 hit-outs and eight disposals an outing in support to Lycett as the Eagles ruck division.

Inter will extend their contracts with Handanovic and D'ambrosio until 2022
Pep Guardiola: I would have stayed at Manchester City and in League 2
Manchester United is ready to sell Alexis, Lingard, Smalling, Dalot, Jones and Rojo
Frank Lampard: I expect more from Chelsea, but now the result is most important
Atalanta does not lose 15 matches in a row – 13 wins and 2 draws
Lorient threw one newcomer off a plane and sent another under the water-all for the sake of presentations on social networks
Pasalic scored a hat-trick in the match against Brescia. Atalanta smashes the opponent 6:1
Source https://www.theage.com.au/sport/afl/west-coast-ruckman-scott-lycett-on-medical-watch-as-eagles-sweat-on-gawn-influence-20180917-p50480.html?ref=rss&utm_medium=rss&utm_source=rss_feed

Crunch time for Apple in fight against $21b EU tax order

After raging at Robinson decision, refreshed Cordner is ready for Roosters return

Rowing back full circle to a 1970s cult classic album

Department of Foreign Affairs and Trade to slash dozens of jobs

Eliminating COVID is a false hope, but 'aggressive suppression' is working

Pucovski targeting baggy green in 'next couple of years'

How rebel MPs, and Trump, forced Boris Johnson into a Huawei backflip

AFL to move all Victorian clubs to Queensland to save season

The Brisbane school so overcrowded its playground time is rostered

McKenna a chance to take on Bulldogs

W-League at risk of becoming fourth-choice competition for Matildas

'I value diversity and my team is reflective of that': Eddie Jones

From the Archives, 1914: First airmail service connects Melbourne to Sydney

MMA champ stabbed to death at own party