Since being stood down from her job, graphic designer Leah Gelman hasn't been spending much on clothes. But when she does, her tastes are an eclectic mix of old and new, thrifty and aspirational.

"I’m more of a follower than a trendsetter," says the 23-year-old, whose yearly clothing budget is about $600. "I am very aware of what is in fashion, I just could never bring myself to break the bank account to make that happen."

She loves Australian brands including Alice McCall and Zimmermann, and often sees things she likes on TV shows such as The Bachelor and then goes to the shops, at least before the coronavirus crisis, to find similar items.

Like many people her age, isolation led her to the video-sharing platform TikTok, whose membership has exploded in Australia to 4.1 million, as well as secondhand marketplace Depop, which counts Australia as its third-largest market worldwide.

"I'm a big advocate of thrift shopping and strongly believe the '70s should make a comeback," says Gelman, who lives with her parents in Sydney's Rose Bay. "I've bought a couple of retro jackets and they're my absolute favourite pieces, as well as buying denim jackets and embroidering or painting on them." 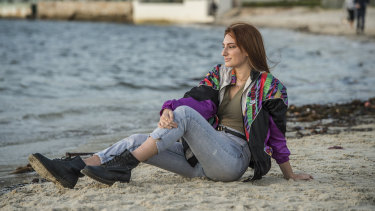 This tension – Gen Z's competing desires for newness and responsible consumption, individuality and following trends – makes the age group a massive challenge for marketers. But with the fashion industry in dire straits due to COVID-19, finding ways to reach, capture and ultimately make money from the 15-25 age group has never been more important. And there's no better place for fashion brands to "win" Gen Z than TikTok.

"It really is the hot ticket right now," says Matthew Iozzi, marketing manager for streetwear brand Superdry, which works with some of the country's top TikTokers, including Cody Brown.

Where TikTok differs from other platforms such as Instagram is that its built on a foundation of video content rather than static images, and oddball humour. In other words, its stars have "actual talent", says Iozzi. "It’s not just based on the aesthetic, there has to be an element of personality and attitude to what you do." 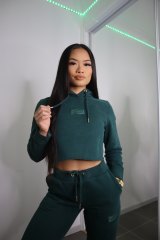 Superdry was one of the first fashion brands in Australia to test the TikTok waters. Iozzi says the return on investment for a piece of TikTok content is about three times that of Instagram.

"I’ve always been posting my life since day one," she says. "So it just felt normal."

Magusara, who has 13.7 million followers, says she started TikToking "just for fun, then my audience started growing". Eighteen months ago, she started fielding offers from brands including global fast-fashion giants Boohoo and Fashion Nova.

Luxury brands including Ralph Lauren (205k followers) and Burberry (25k followers) are also steadily taking up residency on the platform. In many cases, Gen Z's ability to afford the latest designer bag or jacket is secondary to introducing them to the brand as young as possible, says Iozzi, "so when they can afford a $250 jacket, they know where to go".

Camilla, one of the first high-end Australian brands on TikTok, has a modest following of 35,000 but a spokeswoman agrees it's about "engaging the next generation''.

''TikTok is the place where our young audience plays. This consumer loves our entry-level product offering ... as well as buying into occasion wear for special events like formals and weddings." 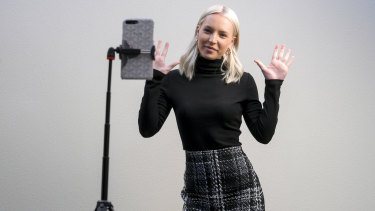 At the other end of the market, youth brand Forever New has been on TikTok since November with pleasing results, says managing director Carolyn Mackenzie. The brand has started working with several creators including Melbourne-based Alex Blakeley, a registered nurse who dabbles in social media.

Blakeley, 25, stresses she's "not interested in modelling work"; her TikTok videos show her dancing and lip-syncing to popular songs, or trying on outfits on Forever New's channel. "With coronavirus, it’s a good way to entertain people and to see positive content," she says. "I like to support businesses that are positive and ... are organic and not fake, and you can relate to." 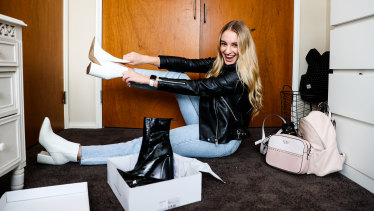 Brooke Irving ... likes to see her clothes "moving" before she buys online.Credit:Edwina Pickles

Sydney journalism student Brooke Irving, 20, says she uses social media to see "what’s new, what’s going to be trending for the next season", and has bought clothes after seeing them on TikTok. She likes that the content looks "really personalised" and not like an advertisement, like on other channels. "For me, a major thing is seeing clothes on a person, actually moving," she says.

If they [Gen Z] feel at any point you’re selling out, it takes two seconds for them to turn.

Guiding many top fashion brands through the TikTok maze is Clare Winterbourn, who, through her agency, Born Bred Talent, has worked with everyone from McDonald's to the Australian government. She says one of TikTok's main strengths over Instagram is it "encourages people to be themselves and try different things". 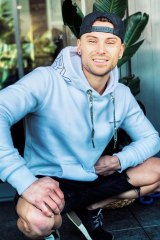 TikTok is still relatively new so its creators don't yet have the same earning potential as Instagram influencers, whose rates can reach tens of thousands per post. Winterbourn estimates a "good ballpark" in Australia is $1000 to $5000 per TikTok post. "If you're trying to target anywhere from 14-26 [year-olds], statistically TikTok is your best bet," she says.

Winterbourn says working with Camilla has been an "eye opener", given the brand's average price point is beyond most average teenagers. "It's about getting your brand in front of as many people as possible," she says. "The 14-year-olds may not be able to buy it but the mother is watching what the daughter is consuming. There’s that double-edged sword [effect]."

Another success story is Depop, which plays into young consumers' concerns about climate change, cost-of-living pressures and their desire for individuality through fashion.

Depop's Australian country manager, Aria Wigneswaran, says prior to the pandemic, the most in-demand items included vintage Mambo surf shirts and '90s streetwear by Nike or Adidas, while in lockdown, popular items include ugg boots, tie-dye pieces and windcheaters.

While the app, which lists about 20 million items (Depop takes a 10 per cent cut on each sale), remains Depop's bread and butter, TikTok is "seeing faster and higher payback", says Wigneswaran. But it remains a "tricky" space for brands to get the content formula – engaging, authentic, shareable – right. "If they [Gen Z] feel at any point you’re selling out, it takes two seconds for them to turn," she says.

Social researcher Claire Madden agrees Gen Z are less brand loyal than Millennials, and getting their attention is a matter of "milliseconds". As social media "natives", Gen Z also feels unprecedented pressure to craft a personal "brand" from childhood, which impacts how they consume fashion.

Madden says that while this need for validation and constant newness has "fuelled the fast-fashion trend", conversely "they are more ethically aware and concerned about the environment. They are caught between wanting to make ethical purchases and staying relevant."

The video-sharing app originated in China in 2012, launching globally in 2018. Its videos most commonly feature people dancing or lip-syncing with clips capped at 15 seconds, or up to 60 seconds for looping videos.

TikTok is in more than 150 countries and 75 languages, with more than 800 million users worldwide. In Australia, membership has just topped 4 million, with 64 per cent aged 24 or under.

During COVID, the app's popularity has skyrocketed. Popular hashtags include #heapsgood, an Australian-specific campaign encouraging users to share their good deeds in isolation, while its hand-washing drive, #safehands, has had about 5 billion views.

Australian fashion brands on TikTok include Camilla, By Johnny, The Daily Edited and General Pants.

She believes brands could better target Gen Z by offering more opportunities for collaboration, including ways to personalise products (luxury menswear brand A-Cold-Wall has gone further by selling zippers, badges and other hardware to people who can't afford its clothes to sew onto their own).

The Iconic's chief marketing officer, Alex Meyer, says there is "no set formula" but the e-tailer's efforts on TikTok, especially during the pandemic, "is about having fun, harnessing creativity, and above all else, offering entertainment".

How that might change once the ability to shop directly from TikTok videos arrives in Australia remains to be seen (a spokesperson declined to comment on a date but testing is underway in the US). But one thing's for sure: Gen Z won't be shy in saying how it feels about it.

Crouch, Ronaldo, Ramos and bale were included in the symbolic van der Vaart team
In Serie A, the rule of 5 substitutions per match was approved
Agent: in 2018, Lautaro could have moved to Roma for 8 million euros, but they refused
Shevchenko will extend his contract with the Ukrainian national team for 2.5 years
Flick about Havertz in Bayern: Few people will not want to see him in their team
Liverpool were evaluated by Werner above Sancho and Caverta. Klopp personally informed the player about the disruption of the transfer (the Athletic)
This is ridiculous. Sancho reacted to the haircut penalty and then deleted the tweet
Source https://www.theage.com.au/lifestyle/fashion/what-makes-a-gen-z-shopper-different-20200520-p54ur5.html?ref=rss&utm_medium=rss&utm_source=rss_feed

‘Tyranny of cash’: Australian vows to clean up weightlifting

Kearns, Gallop among names in frame for rugby hot seat

Australia could be poised for boom in Hollywood production, says Ausfilm boss

After his own troubling run-ins with police, Indigenous director offers hope with documentary

'I lived with a lot of denial': former politician Michael Yabsley's new life

How technology will redefine the region post-virus

Take a number: the rules of synchronised, socially distanced swimming

'It gets ugly': Universities brace for major reform to save research

Black Lives Matter Rally: An important issue but a rally is too dangerous

'Incomprehensible': How Rio Tinto reduced 46,000 years of history to rubble

Heritage gem emerges from the rubble

Making the most of a 90-minute seating is thirsty work

Your Daily Horoscope for Saturday, June 6

When I look at America torn apart, I see my own family and Australia's history of racism

Business group lays out its wish list of reforms

I wanna be a celebrity, a regular household name

$721 million robo-debt refund must be sped up, lawyers say

Is anyone flying? Melbourne Airport passenger numbers at record low

'We thought three years of work was down the drain': how NGV saved the show

Curse of the Pharaoh: Sydney's summer of blockbusters is over

‘America is finished if campaign to bring down Trump succeeds’

NRL 2020 as it happened: Munster magic the difference as Storm topple Souths

Snitz poised to get the job Dunn

‘Up yours’: Storm star’s perfect timing

Fiction reviews: Romance in Marseille and three other titles

From degustation to delivering lasagnes: how Ben Shewry's crash-tackled a crisis

From degustation to delivering lasagnes: how Ben Shewry crash-tackled a crisis

Rise up! My sourdough baking hell

Gourmet-geared gifts for your favourite foodie

Poh Ling Yeow: 'I’ve always been very greedy – not for money, but for life experience'

Exciting Times a reminder of how fraught relationships can be

My pandemic pantry: the surprising items that became essential

‘Not over til no virus in the world’: WHO