Who knows how Housos has overcome the odds to reach a third season? Whether it's some kind of deal with the devil, or simply that God hates Australia, the fact is it's here and we all have to deal with that fact. As Season 3 opens, Franky, Shazza, Vanessa and Kev are locked down, which provides a perfect opportunity for comedic shenanigans that are sure to induce a deep, abiding weariness in anyone who witnesses them. Taking the concept of "lowest common denominator" to extremes that Mrs Brown's Boys could only dream of, Pauly Fenech and his merry troupe of laugh vacuums pull strange faces, shout swearwords in irritating voices, and paint a picture of the Australian underclass that would, if taken seriously, lead to skyrocketing sales of flamethrowers across the nation. 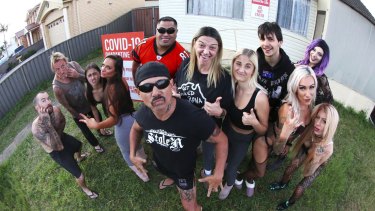 Housos is back for a third season.

America has shown that animation is often where the smartest and funniest TV comedy is to be found, but Australia has long waited in vain for an adult-oriented cartoon of quality. With the arrival of Regular Old Bogan, that wait continues. The cheap ugliness of the animation isn't a deal-breaker: crude visuals can always be forgiven in the presence of sharp writing. The writing here, though, is as sharp as a pet rock. The creators clearly think it's a stunning innovation to have cartoon characters say naughty words: that's the one trick they know, and they milk it for all it's worth – which is nothing. If it weren't for the fact Housos is on right before it, ROB would be the saddest indictment of Australian television's creative bankruptcy since Bingles. 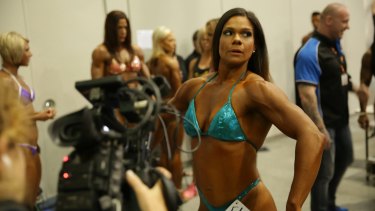 A still from Destination Arnold, a new SBS show about the road to the Arnolds, a female bodybuilding competition.Credit:SBS

In a saturated TV marketplace, it can be difficult to find fresh ideas, but a Canadian drama about an Indigenous teenager faced with frightening supernatural events seems to fit the bill. Trickster kicks off with a harrowing scene in a forbidding forest before switching to more mundane images of dread: drugs, poverty and school bullies. Still, dark magic lurks round every corner as our hero Jared, fighting to keep his head above water and his family from disintegrating entirely, is confronted with a terrifying new suite of challenges. A different kind of fantasy, the show does a decent job of weaving social realism amid the magical escapades, and has a subtle wry humour to go with its eldritch horrors.

An array of supporting characters in the absurdist art installation that is the Trump presidency give the inside scoop on what happened, how it happened, and what the hell is going on. Allies such as Rudy Giuliani give their take, as do foes including Stormy Daniels. It's all very well done, the theatre and madness of the last four years presented with a flair for the dramatic. Yet it's difficult to enjoy, because every time you're reminded that this unlikely saga is not a reality show or a Hollywood gossipfest, but the story of the actual government of the actual United States of America, it all becomes deeply, sickeningly depressing. If you like to stay as informed as possible, watch. If you like to relax and be happy, don't. 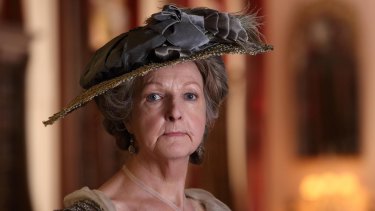 Is the idea of human beings breaking biological barriers and evolving into a more advanced race of super-powered demi-gods really cool, or terrifying? This documentary series isn't as Marvel Cinematic Universe-y as the title might lead one to believe – the possibility of humans becoming stronger and healthier is canvassed, but the focus is more on showcasing the incredible work scientists have already done to unlock the secrets of human biology for the betterment of all. 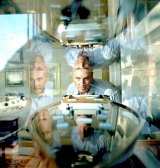 A still from Searching for Superhuman, on the SBS.Credit:Jean-Christian Bourcart

The first episode relates the epic tale of the deciphering of our genetic code, and the multitude of breakthroughs that flowed from the triumph of the Human Genome Project. An enlightening dive into humanity's quest to better understand itself, that also provides some welcome good cheer about our future: advances in DNA sequencing hold enormous promise in the fight against many killer diseases.

Bright young things Kirsten Drysdale and Zoe Norton Lodge examine the phenomenon of public shaming, an increasingly popular pastime nowadays as people find themselves with more and more excess spare time. In the first episode they zero in on Nick Kyrgios and try to figure out whether it's possible for such a star, once tarred with the "bad boy" brush, to scrub himself clean of that stain.

The exploration of how Kyrgios gained his image, whether it's merited, and how public perceptions can be manipulated is done with good humour and admirable sympathy for its subject – who is perhaps not exactly as portrayed by the media. It's a show with much of real substance to discuss, done with an attractive lightness of touch. But we could definitely do with less of the awkwardly staged comedy banter between Drysdale and Norton Lodge, which grates more than amuses.

Chef May Yacoubi brings us the wonders of Lebanese cuisine, showcasing a spectacular mezze table in her continuing quest to make the world fall in love with Middle Eastern cookery. As TV chefs go, May is pleasant enough company, with a winning smile, piercing eyes and a down-to-earth passion for her subject. The show itself is nothing revolutionary: an engaging host running through a variety of foodstuffs that will look nowhere near as good when you make them at home. Those seeking new and worldlier ways to prepare dinner will surely enjoy.

Created by Hank Steinberg (Without a Trace, The Last Ship) and inspired by real life events, this American legal drama stars Nicholas Pinnock (Counterpart) as Aaron Wallace, a club owner who receives a life sentence for a crime he didn't commit. Determined to free himself and help those in a similar predicament,Wallace earns his legal degree and represents fellow inmates in court. It's a case-per-episode model, but with a sturdy overall narrative, as Wallace has to evade powerful adversaries while accepting that some on the outside, including his wife Marie (Joy Bryant), have already moved on. It's heavy-handed in part, but honest about institutional flaws.

Adapted from the 2011 novel by P.D. James, this Georgian murder mystery is sumptuous unofficial fan-fiction for Jane Austen's Pride and Prejudice, where Darcy and Elizabeth (Matthew Rhys and Anna Maxwell Martin) have been happily married for six years. A grisly killing on the night the couple are hosting a ball sees Elizabeth's untrustworthy brother-in-law, George Wickham (Matthew Goode), charged with murder. First airing in 2013, it's a best of both worlds proposition for British TV devotees – period manners and costumes with a crime to solve. It moves at a serious clip and has enough self-awareness to avoid dutiful homage.

First seen victoriously exiting a London courthouse after taking legal action against a newspaper that accused him of corruption, Conservative party politician Peter Laurence is a hand-in-glove role for Hugh Laurie. Ebullient but calculating, the self-made cabinet member is a balancing act aiming upwards and hoping not to be dragged down. In this four-part BBC drama, the considerable machinations that swirl around Laurence – a possible illegitimate daughter, rumours of a shonky past, and aggrieved adversaries – don't frame him as a hero but rather a player trying to stay one step ahead of defeat. As with the excellent 2018 Netflix series Collateral, Roadkill was written by acclaimed playwright David Hare. Both limited series look at power and institutions, although this time the setting is more 10 Downing Street than a police station interview room.With typically testy exchanges, the narrative examines which of people or structures bends to the demands of the other. "Well that was good fun," Helen McCrory's formidable prime minister Dawn Ellison notes after disappointing Laurence, and while this is a post-Brexit landscape sans pandemic, this promising show feels timely in the way it captures the political flux of conscience and consequence.

Flick about 3:1 with Stuttgart: we Understand that for such a game we will not get awards for beauty, but Bayern achieves results
Cloud has 112 dry games out of 200 for Atletico in La Liga. This is a record
Mahrez on Burnley's hat-trick: the Third goal is the best - I don't often score with my head. But city's victory is more important
Mourinho against Chelsea is always powerful. How will it be this time?
Real Madrid is the leader in students in the top-5 leagues. Spain generally dominates, and the supplier from Germany is only Stuttgart
Thomas Muller: What do they say, you need to prove yourself on a windy evening in Stoke? Stuttgart is not Stoke, but their team is good
Atletico won the sixth consecutive game in La Liga, a winless streak - 25 games
Source https://www.smh.com.au/culture/tv-and-radio/whats-on-tv-monday-october-26-to-sunday-november-1-20201023-h1rm68.html?ref=rss&utm_medium=rss&utm_source=rss_culture